Liberal Writer: 'There's No Such Thing as a Good Trump Voter'

Bear with me for a moment as I endeavor to justify an act of self-promotion. As many readers may recall, Mary Katharine Ham and I co-authored a book entitled End of Discussion in 2015. It was published the week prior to Donald Trump announcing his presidential campaign, which quickly caught fire among a large segment of GOP primary voters. The rest, as they say, is history.  In accordance with the federal law* requiring that all conservative-leaning books have lengthy subtitles, our secondary bit was, "How the Left's Outrage Industry Shuts Down Debate, Manipulates Voters and Makes America Less Free (and Fun!)"  At its core, End of Discussion is an expose and critique of the Left's increasing reliance on moral bullying -- wherein they seek to "win" social and political debates by preventing them from happening.  The idea is to impugn motives and disqualify people based out of hand, negating any need for further discourse.

Believing or articulating the 'wrong' sorts of ideas that fall within an ever-expanding realm of Thought Crimes -- as identified and adjudicated by the aggressive Lefties who dominate our cultural institutions -- renders someone de facto bad, or even evil, and therefore unworthy of respect or serious consideration.  Those who embrace this form reflexive delegitimization practice their scorched-earth, zero-sum form of politics with a religious zeal, eagerly punishing and purging transgressors.  They feign outrage, claim scalps, and endlessly impute the darkest, ugliest intentions onto their opponents.  This isn't merely the annoying, tut-tutting political correctness of old.  It's weaponized, stifling political correctness, designed to stamp out opposing views and assert cultural dominance by default.  It is conversation-stymying, manipulative, and is poisonous to a free society.

We wrote our book as a clarion call to people of all political stripes who are concerned by the downward trajectory of our collective ability to discuss, much less solve, our national challenges.  But it also serves as (what has turned out to be) an incredibly timely warning to the toxic outrage warriors: You're hurting the country, your 'victories' are corrosive to our body politic, and your ceaseless smear campaigns and thought-policing are alienating a lot of Americans.  Push too far, and there will be a backlash.  Boy, was there ever.  Donald Trump -- for better and worse -- is the human embodiment of a middle finger to these people.  Mounting an open revolt against America's spiraling, absurdist political-correctness-on-stilts was far from the sole reason Trump was nominated and elected, but you're kidding yourself if you don't believe it was a very important factor.  That's why, as many intellectually-curious and alarmed left-of-center Americans cast about for explanations of what just happened, we humbly approve this message:

If we're talking Books That Explain Trump, I would also suggest @guypbenson @mkhammer "End of Discussion" on shaming of non-progressives. 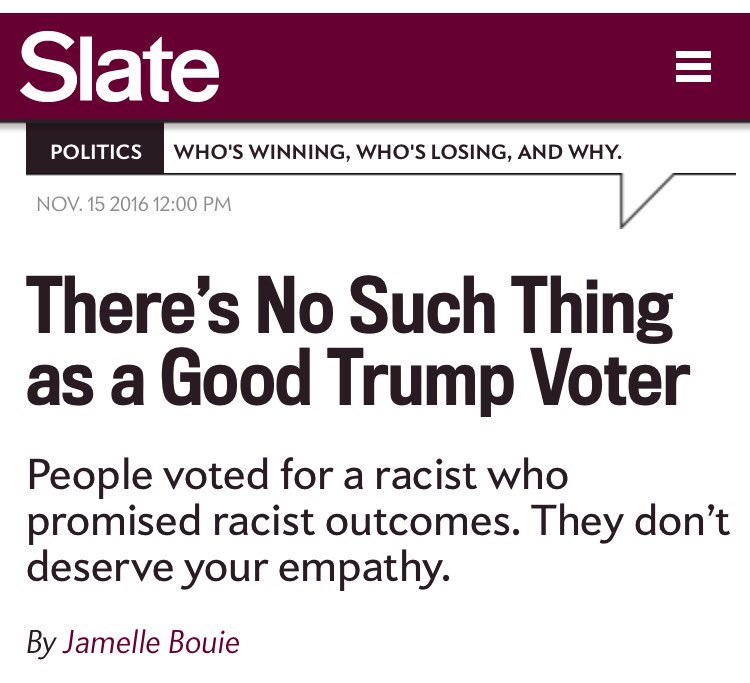 Not a single person -- more than 60 million fellow citizens -- can be forgiven or excused for casting a ballot for Donald Trump. Each and every one of them (including millions of racial minorities, it must be said) did so for unacceptable reasons, rendering them unworthy of empathy.  Ironically, this is precisely the sort of "dehumanization" leftists constantly and often hysterically lament; a right-wing phenomenon they perceive around every corner.  But this is different, you see, because shut up.  When Hillary Clinton attacked "half" of Trump's backers as "deplorable," millions of people rightly objected. She retreated.  Now faced with a crushing political loss, some of the Left's worst offenders have taken to lashing out in an even nastier clumsier manner, apparently determined to step up their demeaning slanders against tens of millions of Americans. This attitude has already backfired on them, but they're doubling down. Perhaps because they've forgotten how to argue in good faith.  Or perhaps because they never learned in the first place. I'll leave you with this cheeky look at the amusing early results of the New York Times' very brief exercise in self-reflection, via Tucker Carlson's new Fox program:

*this is a joke.
A Big Lie Biden Told on Afghanistan Has Just Been Exposed
Katie Pavlich
Milley Details Nancy Pelosi's Attempt to Take Over the Chain-of-Command
Katie Pavlich