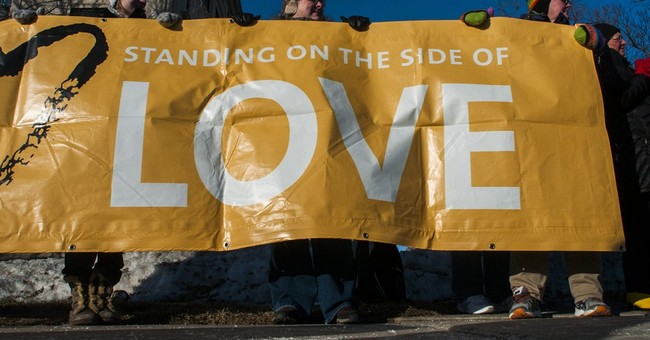 Americans' views on same-sex marriage have shifted dramatically in recent years, with solid majorities now approving of what supporters savvily branded "marriage equality." The trend is even more pronounced among younger voters; a recent poll of young Republicans measured super-majority support for the practice. One of gay marriage proponents' most effective and persuasive arguments appealed to many Americans' "live and let live" sense of fair play. Hey, it's a free country. The core idea was compelling: "Our love and our marriage doesn't affect you." They asked for tolerance, if not acceptance. And they won. Now we're beginning to see what the disquieting "next step" looks like, at least as imagined by some of the loudest and most radical voices. Tolerance is no longer sufficient. Enforced celebration is the new standard. Those who resist will be labeled bigots, and may be subject to having their lives or livelihoods destroyed. We're way past "live and let live." We've moved on to coercion in the name of "tolerance." The Christian photographer must agree to photograph a lesbian ceremony, or face lawsuits. The Muslim pastry chef must bake a cake for a gay ceremony that violates the teachings of her faith. And the CEO who once opposed legalized same-sex marriage through a private donation must be ousted from his job:

Mozilla CEO Brendan Eich resigned under pressure after gay rights activists demanded that he step down or recant his support of traditional marriage laws. Eich donated $1,000 to support Proposition 8, the California ballot initiative that amended the state's constitution to define marriage as between one man and one woman. "I don't want to talk about my personal beliefs because I kept them out of Mozilla all these 15 years we've been going,” Eich told The Guardian. “I don't believe they're relevant.” That wasn't an option. "CEO Brendan Eich should make an unequivocal statement of support for marriage equality," a Credoaction petition signed by almost 75,000 people said, per The Inquirer. "If he cannot, he should resign. And if he will not, the board should fire him immediately." When asked if his beliefs about marriage should constitute a firing offense the way racism or sexism does, Eich argued that these religious beliefs — and beliefs popular as of 2008 — should not be used as a basis for dismissal. "I don't believe that's true, on the basis of what's permissible to support or vote on in 2008," he told CNET. "It's still permissible. Beliefs that are protected, that include political and religious speech, are generally not something that can be held against even a CEO..."


How wrong he was. Eich is out on his ear for the unpardonable sin of subscribing to a moral and political belief so mean-spirited and close-minded that it was shared by President Obama back when the fateful contribution was made. (Obama was never actually against gay marriage, but it was his public stance for awhile). Indeed, a majority of California voters endorsed Proposition 8 that year, including substantial majorities of Hispanics and African-Americans. When Eich's private beliefs recently came to light, online petitioners demanded that he either renounce them or be fired. Think about that. "Renounce your beliefs and agree with us, or else" is not a sentence that should be uttered lightly, if ever, in a free society. Scalp collected, and message received. They didn't even seriously allege -- let alone try to prove -- that Eich's tenure as CEO would be marked by discrimination in any way. It was his mere presence that was intolerable. An appeal to reason from one of Eich's gay colleagues evidently fell on deaf ears:


Mozilla's Education Lead Christie Koehler, who is gay, also defended the company in a blog post, despite stressing that she was "disappointed" to learn that Eich had made donations in support of Prop 8. "Certainly it would be problematic if Brendan’s behavior within Mozilla was explicitly discriminatory ... I haven’t personally seen this (although to be clear, I was not part of Brendan’s reporting structure until today)," she wrote. "To the contrary, over the years I have watched Brendan be an ally in many areas and bring clarity and leadership when needed."


Ah, but who needs "clarity and leadership" in a CEO when there are ideological conformity tests to satisfy? Upon Eich's departure, Mozilla issued a statement expressing their support of "free speech and equality," with no apparent trace of irony. Gay rights organization GLAAD was even less self-aware in its official response:


Mozilla’s strong statement in favor of equality today reflects where corporate America is: inclusive, safe, and welcoming to all.


Inclusive and welcoming to all...unless you're a hateful "bigot" who disagrees with us on the definition of marriage -- in which case, get the hell out. Are these the new rules? And how, exactly, do they work?

Democratic senators Joe Manchin and Mark Pryor both oppose same-sex marriage. I guess they should both resign immediately, right?


Should these politicians' donors be hounded from their jobs, too? Are any of the 7 million Californians who voted for Prop 8 employable at a generally gay-friendly workplace? Are traditionalist religious people now prima facie unqualified to lead companies -- or to hold any position of authority in the private sector, for that matter? This is madness. And it's corrosive to the soul of our country. Don't get me wrong: I'm not arguing that Mozilla didn't have the right to bow to a noisy and influential group of customers and investors (addendum: and employees). But the ability to boycott -- or the success of a boycott -- is not necessarily a reflection of its prudence, justice, or kindness. The impulse to purge and punish divergent political viewpoints does not enrich us as a nation. Nor does it make us more free -- and we're a nation founded on liberty. I appreciate that many gay people believe their claim on said liberty has been unfairly denied for too long. But most would also surely agree that much progress has been made on that front. The gay rights cause has been best advanced by winning hearts and minds, not by instilling fear or exacting perverse moral retribution. That's part of why these purges are so troubling. Anyone who values genuine tolerance and freedom ought to reject them. But if one ultimately feels compelled to join the jackals in this spiteful, score-settling crusade, one should at least have the intellectual integrity to permanently surrender one's "tolerance" card. And if you don't understand that point, I'm afraid you're just as blind as the (remaining) powers-that-be at Mozilla:

@fluffyAoSHQ On the contrary, diverse views and openness is the core of who Mozilla is.

Will [Eich] now be forced to walk through the streets in shame? Why not the stocks? The whole episode disgusts me – as it should disgust anyone interested in a tolerant and diverse society. If this is the gay rights movement today – hounding our opponents with a fanaticism more like the religious right than anyone else – then count me out. If we are about intimidating the free speech of others, we are no better than the anti-gay bullies who came before us.