Fox News Poll: Yep, Hillary's Down, and This Race is Now a Dead Heat 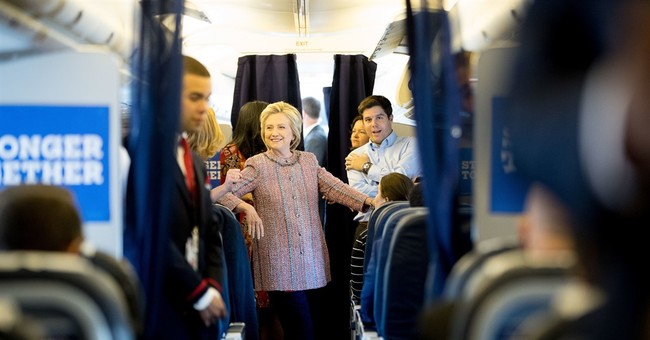 Fox News' pollster is the latest independent entity to verify a trend that has become increasingly clear: The presidential race is now a dead heat between two unpopular candidates. Before the Fox survey was released last night, Hillary's RCP average lead had been whittled down to 1.1 percentage points. That margin will tighten even more as emerging data is factored in. It's a jump ball nationally, as swing state polls continue to move Trump's way (more on that in a moment).  In August, Fox's public opinion firm measured a ten-point Hillary advantage.  Here are your new top lines:

The two-way margin is exactly the same, just reversed, with Trump ahead 46-45. Here are some highlights from the data set's internal numbers:

(1) Only about half of each major party nominee's supporters say they "strongly favor" their preferred candidate, with the other half expressing "reservations" or voting out of "dislike" for the alternative option.

(2) Just 28 percent of respondents are enthusiastic or satisfied with the state of the federal government, with the balance describing themselves as dissatisfied or angry.

(5) Approximately half of GOP-leaning voters would prefer a nominee other than Donald Trump. Forty-three percent of Democrats say they wish Bernie Sanders had won the nomination.  Meanwhile, via HuffPo/YouGov, if you think Hillary's health issues haven't had an impact, you're kidding yourself:

New HuffPost/YouGov: Clinton's back on the trail, but voters are less certain of her health https://t.co/gVaceYvNUI pic.twitter.com/G8jOxdhdYk

And another battleground poll to chew over:

EXCLUSIVE POLL: Presidential race between Clinton & Trump too close to call in Michigan.

I'll leave you with our discussion of the dynamics of the race on Fox News. Come for the polling analysis, stay for the Mean Girls reference -- via Right Sightings: