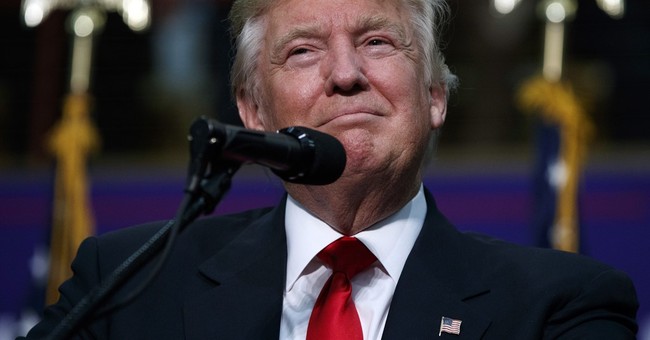 In July, this polling series had Hillary Clinton ahead by seven points nationwide among registered voters. Here we are two months later and it's dead even. What changed? Well, as we noted earlier, Hillary has been tanking for weeks, but the Times and CBS News applied a likely voter screen to their numbers for the first time this cycle. Those two factors combine to pull this election into an exact dead heat nationwide. In case you're curious, this survey was in the field from September 9 to 13, so only about half of respondents' data was collected after Mrs. Clinton's medical incident, and subsequent opacity and spin. Note the partisan sample split I calculated based on the pollster's statistics:

A D/R/I split of 37/32/31 doesn't seem unreasonable within the context of the last few presidential elections (D+7 in 2008, D+6 in 2012). Trump and Clinton are now performing virtually evenly among their parties' bases, pulling in 82 and 81 percent of self-identified partisans, respectively. Independents are tipping in the Republican's direction by four points. But if there are significantly more Democrat-leaning voters in the sample, and the spread of independents isn't too pronounced, how is Trump tied? A pair of additional trends -- an enthusiasm edge and how young voters say they're planing to vote:

Overall, just 43 percent of likely voters describe themselves as very enthusiastic about casting a ballot in November. Fifty-one percent of Mr. Trump’s supporters say they are very enthusiastic about voting; 43 percent of Mrs. Clinton’s supporters say they are very enthusiastic...The third-party candidates draw their strongest support from younger voters. Twenty-six percent of voters ages 18 to 29 say they plan to vote for Mr. Johnson, and another 10 percent back Ms. Stein. A little more than one in five political independents say they will vote for one of the third-party candidates. Discontent with the major party candidates is widespread. Among those who say they intend to vote for Mr. Trump or Mrs. Clinton, slightly more than half express strong support. The rest say that they harbor reservations about their candidate, or that they are simply voting to thwart the other nominee.

In short, many Americans are dissatisfied with their choices, but Trump's backers are eight points more likely to be very enthusiastic about voting than Clinton's.  More than one-third (36 percent) of young people are planning to manifest their disapproval of the two major party nominees by casting ballots for Libertarian Gary Johnson or the Green Party's Jill Stein.  That's an enormous number, and it's helping Trump.  The actions of disaffected voters under the age of 30 could end up being an extremely important factor in this race, for reasons analyzed by Jim Geraghty and Allahpundit.  Somewhat remarkably, Americans seem fairly ambivalent on the candidates' medical records opacity, splitting down the middle on whether more information ought to be released (the poll was taken prior to each campaign's updated doctor letters).  Meanwhile, a Quinnipiac national poll out this week shows Clinton's August lead sliced in half -- from ten to five -- among registered voters, and a two point game among likely voters.  Virtually all of the movement is in one direction, including the swing states (I've removed a deleted tweet from Fox News' John Roberts reporting a new Monmouth poll out of Iowa allegedly showing Trump ahead by eight):

Clinton +3 (with third parties) in Virginia https://t.co/vUueZVPtep Drops from +6 among RVs.

With even Virginia and Colorado tightening significantly, we are one Pennsylvania dead heat poll away from full-blown Democratic panic.  I'll leave you with a New York Times scoop that casts new doubt on the storyline that Donald Trump bribed Florida Attorney General Pam Bondi to forego a Trump University investigation in exchange for a large campaign donation from his foundation.  This new detail doesn't definitively disprove that theory by any means, but it makes the alleged smoking gun look a lot less smokey:

Trump’s check to Pam Bondi’s PAC was dated BEFORE news that her office was reviewing a lawsuit against Trump U https://t.co/PhWX99IOkw

UPDATE - And there's that Iowa poll: