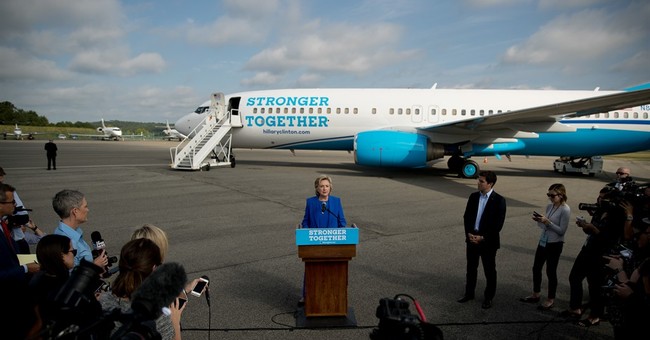 Part of the reason that lefties are so angry with Matt Lauer is that they're developing mild flop sweat, and lashing out. Hillary Clinton was supposed to be running away with this election by now, but her gaping self-inflicted wounds and Trump's slightly more disciplined style have combined to significantly tighten the contest over the last three weeks. Not only are the national polls hovering in margin-of-error territory, battleground surveys are also reflecting a closer race. The latest numbers from Quinnipiac:

Ties in Ohio and Florida are good news for Trump, who has been outspent considerably in both states. Trailing by four in North Carolina (another recent poll found the same pro-Hillary margin, while this one has Trump ahead by a nose) is more of a concern. The Pennsylvania number isn't great, but it's better than it has been for him in months.  Remember, despite what Trump's team might say, the Keystone State is effectively a must-win for them, or else a lot of other states would have to break their way; a much, much harder path. The numbers above are from head-to-head polling. In the four-way battle, nothing changes margin-wise...except in the Buckeye State:

Q-poll: In 4-way race, all battleground margins are the same as the 2-way. Except for OH, where Trump gains ground. pic.twitter.com/KoHJduJwBb

Bottom line: Trump's standing is unquestionably improved, even as he and Hillary remain mired in the upper-30's to low-40's when Johnson and Stein are included. Hillary Clinton is still the favorite to win this race, but her footing has slipped, and her ongoing lies and obfuscation are likely to keep alienating an electorate that was never especially fond of her to begin with.  Parting thought: One would imagine Quinnipiac also polled the Senate races in all four of these states, each of which is important and competitive.  Given the pattern of Rubio (FL), Portman (OH), Toomey (PA) all consistently out-performing Trump by healthy margins in previous surveys, there may be some additional positive news for the GOP to emerge of this data set within the next few days.  I'd expect to see relatively close races, with all four Senate Republican incumbents either leading or virtually tied. Stay tuned.