Choking: As Hillary's Negatives Spike Again, She Can Thank Her Own Scandals 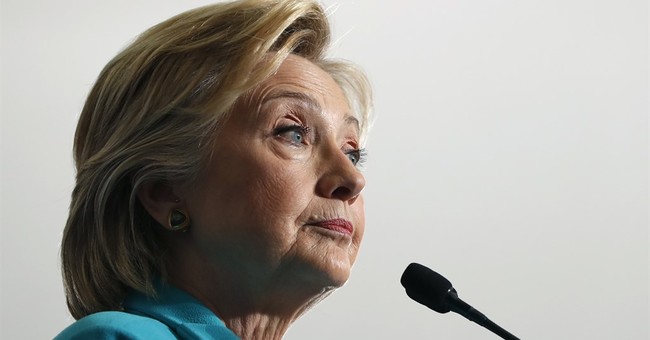 A survey from NBC News measured her favorability rating at a miserable (38/60) in the aftermath of the FBI's comprehensive dismantling of her email lies in early July, after which she rebounded in most public polling to a comparatively improved footing.  As Cortney reported earlier, new numbers from the Washington Post and ABC News show that she's losing ground again, as her negatives have risen to a new high in the series, pulling awfully close to Trump's still-terrible standing:

Hillary Clinton’s unpopularity reached a new high in the latest ABC News/Washington Post poll, putting her on par with Donald Trump among registered voters. The latest findings solidify their positions as the two most unpopular presidential candidates in polling dating back more than 30 years. Among all adults, 56 percent now view Clinton unfavorably, up 6 percentage points in three weeks, compared with 63 percent who say the same about Trump. Among registered voters, the two candidates have nearly identical unfavorable ratings: 59 percent for Clinton versus 60 percent for Trump.

This data comes as Mrs. Clinton faces another barrage of scrutiny over her email scandal, with the Associated Press reporting yesterday that a number of emails she withheld from the State Department dealt with the 2012 terrorist attack in Benghazi, Libya -- another topic about which she has lied repeatedly.  Hillary stated unequivocally, including under oath to a federal judge and in Congressional testimony, that she and her attorneys handed over all work-related emails, as required by a court order (her exclusive use of a private server had previously precluded legally-mandated responsiveness to FOIA requests).  In fact, she said, they'd probably turned over more material than necessary, just to be safe.  Wrong.  FBI Director James Comey revealed last month that investigators had discovered "thousands" of emails discussing official business that she had not delivered and deleted, including some classified messages.  It now appears that at least some of these withheld emails discussed Benghazi, the Congressional probe into which ended up uncovering Clinton's totally improper and recklessly unsecure server in the first place.  Here's how one reporter reacted to yesterday's development:

Fair and legitimate question: Why were emails about Benghazi on Hillary Clinton’s private email server? https://t.co/4wGgseNUQT

Easy answer: Because all of her e-mails were on that server, including thousands of classified missives that she originally claimed didn't exist.  Again, nearly every single assertion she's made about her email scheme has been disproven.  Matt noted earlier that yet another revelation from a new crop of emails shows that months after departing the State Department, Hillary was still trafficking in classified (now redacted) information, this time involving a deal with the United Arab Emirates.  It never ends. Meanwhile, the smoke billowing around the Clinton Foundation has grown so chokingly thick that even the ultra-liberal, in-the-tank New York Times editorial board is urging the Clintons so sever ties with their high dollar slush fund/favor bank:

The New York Times just made it harder for Clinton to explain away the Clinton Foundation https://t.co/L0hAe9tLLq pic.twitter.com/zMcPm46wSH

The heartening news for Team Hillary is that Donald Trump is not gaining on her in the polling; his support has remained basically stagnant.  But she's backsliding in his direction, failing to consolidate her post-DNC gains, largely on account of self-inflicted wounds.  It takes some real skill to fall into a virtual unpopularity tie with the least-liked major party nominee in modern American history, but damned if Hillary Clinton isn't pulling it off.  I'll leave you with this:

In fairness, when does one find the time to meet the press when one is busy raising $20 million from mega donors over a single weekend in the Hamptons? How's that [giggles] "commitment" to getting money out of politics coming along?