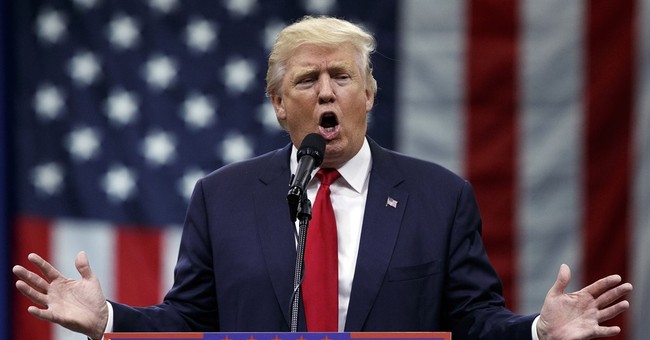 High-level, retaliatory trolling from the master troll himself:

Hardcore Trump followers will eat this up. Other Republicans will mutter about unhelpfulness.  Never-Trumpers will see it as yet more evidence that the man doesn't deserve their support.  In other words, it's a day ending in 'y.'  Both Ryan and McCain have begrudgingly endorsed Trump in the general election, with the former presiding over Trump's nominating convention and explicitly endorsing him in a primetime speech. But they've both repudiated some of Trump's most contemptible excesses, including the Arizona Senator's notably sharp rebuke of Trump's self-destructive fight with a Muslim gold star family -- which even Chris Christie(!) has condemned.  America's biggest ego is likely bruised over the reality that Republicans haven't heeded his demand that they back him up over the Khan affair, and Mister Trump doesn't take personal disloyalty lightly.  So he's throwing Ryan's reluctant pre-endorsement language back in his face, slapping McCain around little (in fairness, he's always been quite clear that he prefers people who weren't captured), and taking gratuitous shots at New Hampshire's incumbent GOP senator Kelly Ayotte, who's locked in a very tight re-election fight.  Unsurprisingly, Trump's bravado about Ayotte is factually inaccurate:

She's "beating him" in the polling average, too. I use scare quotes because they aren't running against each other; they'll appear on the same party ticket in November, and she's supporting him against Hillary. Other than that, solid analysis from Trump.  Given the dynamics of her race, Ayotte may very well be pleased with these barbs, which might even be spun as strategic if Trump ever chose informed strategic thinking over impulsive blurting.  As for Speaker Ryan, here's his team's pointed reply to Trump's latest declaration:

"Neither Speaker Ryan nor anyone on his team has ever asked for Donald Trump's endorsement," predicts victory next week.

Ryan's primary is next week. The evidence suggests he'll win handily, but Trump's allies are hoping to exact the ultimate revenge by pulling off an upset.  Regardless, Trump's mood swings (which have fueled speculation about whether he's mentally stable -- that's just what a lot of people are saying, you tell me, as The Donald might cynically frame it) wildly vacillate between "we're so unified" to "screw unity, I don't need these losers."  Based on new polling in which Hillary has reclaimed her lead, he does, in fact, need those losers.  Democratic unity has congealed, while Republicans and conservatives are peeling off of the Trump train.  And right now, he's losing again.  He knows it, too, which is why he keeps spouting off about how he can just feel the general election "rigging" in his bones, or whatever.  This is what he does whenever he's failing, incidentally.  He launches baseless claims of illegitimacy.  Because Mister Trump couldn't possibly lose on his own -- based on, say, his terrible favorable rating.  I'll leave you with John Kasich's not-coincidentally-timed praise of Ryan, McCain and Ayotte (Trump keeps antagonizing the popular Ohio governor, whose political operation the virtually campaignless billionaire may end up needing to help him win the crucial state, in which he's tied at best), plus another campaign data point:

Republicans are lucky to have great ldrs like @PRyan, @SenJohnMcCain & @KellyAyotte -ALL are critical to holding our conservative majorities

But earned media, Trump's defenders will shoot back. Are they referring to all the free coverage that resulted in the first-ever negative convention bounce, as measured by Gallup, and that helped amass a historically horrific unfavorable rating?  Just another brilliant chess move by a "flawless" campaign, I guess.  Here's the thing: If you want Trump to win -- and Hillary deserves to lose -- he needs to improve.  Pretending that all is well, and ignoring the biased media's 'skewed' polls does him no good.
MSNBC Contributor Says Catering to AOC, Far-Left Could be 'Suicide for Democrats'
Landon Mion
Illinois Rep. Takes Issue with Manchin's Climate Provision Criticism, Says W.V.'s Economy is 'Irrelevant'
Landon Mion
The Department of Justice Asks SCOTUS to Block Texas’ Near-Total Abortion Ban
Madeline Leesman
'Airplane!' Creator Explains How the Woke Mob Ruined Comedy
Spencer Brown
Poll: Is Biden’s Approval Rating Affecting Democrat’s Gubernatorial Prospects?