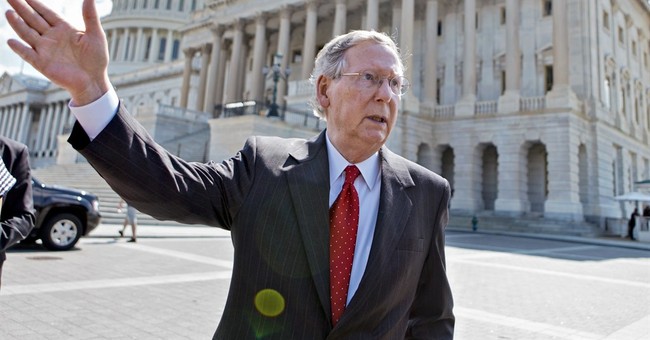 With so much attention focused on the high-octane presidential race, it can be easy to overlook important down-ballot races. House Republicans enjoy a wide enough majority that even in this volatile year, few prognosticators expect them to surrender it -- although senior GOP officials have told me that if Donald Trump tanks down the stretch, they worry that it may become vulnerable. Over in the Senate, however, Democrats only need to net five seats (four, if Democrats hold the White House) to retake an upper chamber majority, The GOP won nine seats in 2014's landslide, but Democrats have a solid chance of flipping control. Why? Republicans took advantage of a very favorable political environment to make major gains in 2010. Six years later, those Senate freshmen are up for re-election, in a presidential year, and in a decidedly different political atmosphere. Because 2010 was such a strong GOP year, Republicans now have a disproportionate number of seats to defend. Advantage: Democrats.

At the moment, defending incumbents in Illinois (Mark Kirk) and Wisconsin (Ron Johnson) are looking like relatively difficult tasks, although neither race is yet out of reach.  But for argument's sake, let's say both of those seats are gone. The Democrats would then need to notch three more net victories to guarantee a Senate Majority. Can they achieve that? New Hampshire Sen. Kelly Ayotte's re-election race has been locked in a dead heat for months, while North Carolina and Indiana are also looking too close to comfort. Let's say Republicans earn a 2-1 split in those races. The GOP would need to run the table in all of the other contested races in order to maintain their edge -- unless they can pick off a seat or two currently in Democratic hands. The best opportunities to do so are in Colorado (a fairly long shot, it seems), and Nevada. Let's look at the fight over Harry Reid's soon-to-be-vacant seat:

Joe Heck is an impressive candidate who represents a swing Nevada district in the House of Representatives, and who also leads the deeply flawed Democratic nominee in the RCP average. This appears to be the strongest pick-up opportunity for the party, which would be huge. It would not only make the Democrats' climb much steeper, it would also replace Harry Reid with a Republican. Here are some developments in other crucial races:

Florida: Marco Rubio may have pulled this seat out of the fire by jumping back into the race, reversing his previous decision not to seek re-election.  The incumbent holds a modest but clear lead in the RCP average over serial resume-padder Patrick Murphy, whose political instincts seem increasingly...questionable.  The other Democrat in the race is crazy person and accused domestic abuser Alan Grayson.  Tell us more about the "war on women," Alan.

Ohio: Rob Portman faces a stiff challenge from former Governor Ted Strickland, and the race is tight.  But Portman has an edge.  He leads by five points in a new Democrat-affiliated poll, and just collected two big union endorsements. Buckeye State Democrats are getting worried:

Democrats in Ohio, Washington and Philadelphia seemed knocked back on their heels Tuesday, after Republican incumbent Sen. Rob Portman snagged back-to-back endorsements from major labor unions. The Fraternal Order of Police of Ohio, the state's largest law enforcement union, endorsed Portman on Tuesday over former Gov. Ted Strickland, in Ohio’s tight U.S. Senate race. Just 24 hours earlier, Portman also snapped up the support of the Ohio Conference of Teamsters—a union that typically endorses Democrats. The surprise union support for Portman, a Chamber of Commerce Republican not traditionally allied with labor, fueled a growing concern among Democrats that Strickland’s campaign is losing ground just as voters begin to tune in...Jennifer Duffy, who tracks Senate races for the nonpartisan Cook Political Report, said the Ohio contest looks different in practice than on paper. “If you look at least at the public polling, it still looks like a very close race,” said Duffy. “But if you watch it every day, it doesn’t feel that way.” She said Portman’s campaign “is firing on all cylinders, doing what they need to do,” while Strickland’s campaign seems more complacent.

Pennsylvania: Pat Toomey has led in every poll taken this year, with the exception of a recent outlier from NBC News (a three point deficit).  Toomey is well-funded and well-liked at home, Donald Trump is polling relatively well in the Keystone state, and the "terribly weak" Democratic nominee is on the defensive over this crass attack (content warning):

It'll still be pretty tough sledding for the NRSC over the next few months, but their candidates are in better shape than many forecasters anticipated they would be at this juncture in the cycle. If they, and Trump, can hit their current polling marks in November, they may just pull this off. If they, and/or he, over-perform today's survey positions, the majority will be safe.