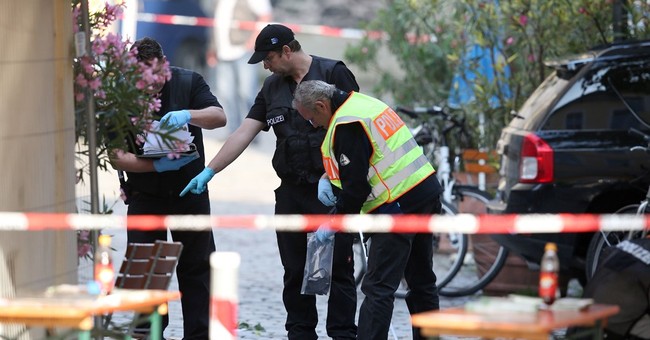 Some commentators are scratching their heads over how Donald Trump could have earned a polling bump out of Cleveland, in light of its various mishaps and controversies (which the Democrats are working to match and surpass) -- and especially after such a dark and foreboding acceptance speech. The reason we predicted he'd get that bounce is because the public mood is dark. We see that reality reflected in national polling week after week. And we see its roots and causes playing out in headlines across the globe. In Germany over this past weekend alone, there were three terrible attacks -- two of which were carried out by Syrian refugees:

The Syrian suicide bomber who injured 15 people in a Sunday night attack on a music festival in Ansbach, Germany, left behind a video pledging allegiance to ISIS leader Abu Bakr al-Baghdadi, Bavarian Interior Minister Joachim Herrmann said Monday. The ISIS-affiliated media group Amaq claimed the attacker was an ISIS "soldier" in a statement the group's supporters posted online Monday, but there is no evidence he was in contact with ISIS or directed to carry out an attack. In the video left on a mobile phone, the 27-year-old Syrian announced his threat to carry out an attack "as an act of revenge against Germans, because they obstruct Islam," Herrmann told a press conference. The man said the attack would be committed in the name of Allah as retaliation for the killing of Muslims. The bomber, who has not been named, was killed.

German police arrested a 16-year-old Afghan boy in Munich on Sunday after police found contradictions in statements the youth made to police earlier about his relationship with an 18-year-old German-Iranian, Ali David Sonboly, who shot and killed nine people in the city on Friday. “There is a suspicion that the 16-year-old is a possible tacit accomplice to [Friday’s] attack,” police said in a statement Sunday, reported by broadcaster Deutsche Welle. “We suspect that this boy aged 16 years could have been aware of the act.” The Afghan youth reportedly went to police voluntarily on Friday after the shooting by Sonboly. But police later came to believe that the Afghan boy may have been involved in posting a message on Facebook that the shooter used to lure victims to a shopping and cinema complex, thus giving rise to suspicions that he knew about the planned attack but failed to report it.

Germany has extremely restrictive gun laws, which have resulted in a flourishing black market awash in illegal firearms.  In any case, here at the DNC, Democrats are celebrating Hillary Clinton's proposal to massively increase the influx of Syrian refugees into the United States. With German Chancellor Angela Merkel under intense fire over the repercussions of her refugee policy, Clinton's party seems intent on framing (very widespread) public skepticism about refugee screening as backwards bigotry. It's true that the US government's vetting process is both improved and more robust than it is elsewhere. But do deliberately missed red flags like this, which contributed to the San Bernardino terrorist attack, inspire confidence? And are Americans supposed to be reassured by public statements from security officials like these?

The Obama administration is fighting a growing national backlash against accepting Syrian refugees, saying the government’s exhaustive screening process and security checks for new arrivals mean they can be safely brought to American soil. Several high-level administration officials have warned in recent months just how challenging this can be. While they say U.S. security measures are much better than in the past, vetting Syrian refugees poses a quandary: How do you screen people from a war-torn country that has few criminal and terrorist databases to check? “I don’t, obviously, put it past the likes of ISIL to infiltrate operatives among these refugees, so that’s a huge concern of ours,” Director of National Intelligence James Clapper said at a security industry conference in September, using another name for the Islamic State. He added that the government has “a pretty aggressive program” for screening refugees but that he is less confident about European nations. FBI Director James Comey added in congressional testimony last month that “a number of people who were of serious concern” slipped through the screening of Iraq War refugees, including two arrested on terrorism-related charges. “There’s no doubt that was the product of a less than excellent vetting,” he said...“If we don’t know much about somebody, there won’t be anything in our data,” he said. “I can’t sit here and offer anybody an absolute assurance that there’s no risk associated with this.”

Americans ought to demand a thoughtful and rational debate on these policies, with less demagoguery on both sides. The rhetoric in Cleveland and Philadelphia suggests that we're unlikely to get it.  And with leadership like this from the Demagogue-in-Chief, is that any surprise?

UPDATE - Two additional notes, via Leah and Cortney: A priest has been brutally murdered in a French church by ISIS terrorists, the latest Islamist horror on Western soil.  And in many hours of rhetoric last night, Democrats saw fit to mention the terror army (of the Obama/Clinton foreign policy's partial creation) zero times.
Is This Why Kamala Was AWOL When Biden Addressed the Collapse of Afghanistan?
Matt Vespa