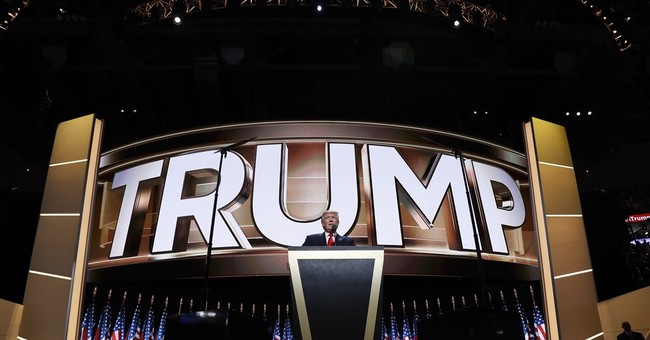 I'll be brief. It's not an original thought by any means -- but it turned into an instant cliche because it's true: Donald Trump just delivered one of the longest, darkest presidential acceptance speeches in history.  The shouted address  was packed with a blend of correct statements, inaccuracies, and exaggerations; fact-checkers have their hands full.  Welcome to politics, especially in 2016.  It also hit on several themes that will likely resonate with many voters -- Security, law and order and restoring American dominance. While most political speeches try to convey optimism and hope, this address painted a very dreary, almost dystopian, picture of America. Yes, it was over-the-top and demagogic, but guess what?

Country is in a dark mood.#RNCinCLE

Just look at the horrendous right track/wrong track numbers detected across the board in national polling. A lot of Americans are feeling deep unease and dissatisfaction about the state of the country. Trump may have gone too far on several occasions, but he was speaking directly to that prevailing sentiment. A modicum of positivity came in the form of a series of assertions that Trump is uniquely equipped to fix these problems, and fast. Very few details of how these things would be accomplished were shared. The GOP nominee's speech had a number of genuine bright spots, of course, including an ode to tolerance, a flash of self-deprication (both of which were ad-libbed), and a lovely tribute to his father. From my perspective, the strongest portion of his comments came toward the very end:

We will rescue kids from failing schools by helping their parents send them to a safe school of their choice. My opponent would rather protect education bureaucrats than serve American children. We will repeal and replace disastrous Obamacare. You will be able to choose your own doctor again...We will take care of our great Veterans like they have never been taken care of before. My opponent dismissed the VA scandal as being not widespread – one more sign of how out of touch she really is. We are going to ask every Department Head in government to provide a list of wasteful spending projects that we can eliminate in my first 100 days. The politicians have talked about it, I’m going to do it. We are also going to appoint justices to the United States Supreme Court who will uphold our laws and our Constitution. The replacement for Justice Scalia will be a person of similar views and principles. This will be one of the most important issues decided by this election. My opponent wants to essentially abolish the 2nd amendment. I, on the other hand, received the early and strong endorsement of the National Rifle Association and will protect the right of all Americans to keep their families safe...

Ivanka Trump, the candidate's elegant eldest daughter, offered eloquent and personal introductory remarks. Despite her detours into ideological statism -- the apple doesn't fall far from the tree in that one regard -- it suspect it was quite effective for viewers at home.  So at last, the show is now over, capped off with "you can't always get what you want" (of all songs!) blaring inside the hall, balloons descending from the rafters. This convention was, by any empirical standard, a mess. An avoidable, acrimonious floor fight.  An avoidable, 36-hour plagiarism kerfuffle. An avoidable spectacle of a primetime speaker getting hounded off the stage with loud boos. But the final night was the by far the smoothest of the week, and I would not be the least bit surprised if Trump enjoys a polling bounce after this, in spite of all the snafus and the dour vision he articulated. Over and over again, the American people were reminded of why they dislike and distrust Hillary Clinton so much.  She'll make her counter-argument next week. Onward, to Philadelphia...