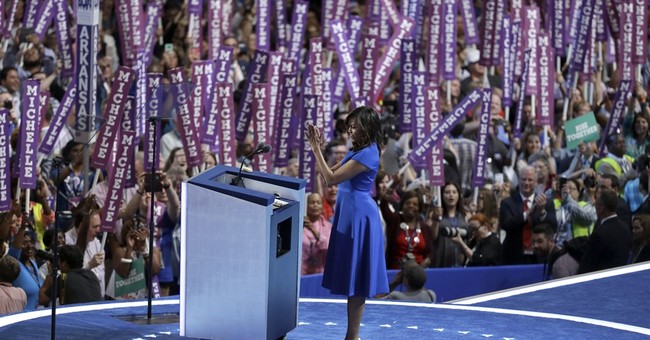 (1) Al Franken and Sarah Silverman were painfully bad, flailing as they tried to "stretch" ahead of an underwhelming performance by Paul Simon.  These people are comedians by trade?

(2) Anastasia Somoza and Cheryl Lankford offered impactful testimonies against Donald Trump. The former is a disability rights activist, who appeared immediately after a short video presentation depicting Republicans and conservative commentators laying into Trump for mocking a disabled reporter.  The latter is an Iraq War widow who was swindled out of thousands of dollars at Trump University.  Her affecting story was showcased heading into the peak of primetime, not accidentally. Her story, and stories like it, will be employed relentlessly in Democratic attack ads through November.

(3) Sen. Cory Booker was shouty and unfocused. He started off talking about how we must all love and support each other, pivoted into conventional attacks against Donald Trump, then closed with a stirring historical ode to America -- which finally pulled some energy out of the largely lethargic crowd.

(4) First Lady Michelle Obama gave by far the best address of the night. It was as well-crafted and well-received as any speech delivered at either party's gathering thus far. She electrified the room, earning loud and sustained applause. Someone on Twitter joked that Mrs. Obama could probably have snatched the nomination away from Hillary Clinton tonight, if only she'd asked for it. Instead, she issued a powerful case against Donald Trump without ever naming him. She took the high road, using clear subtext to slice into the GOP nominee. She also made an urgent call for party unity, indirectly repudiating the "Bernie or Bust" crowd by praising Hillary's approach and attitude after losing a tough primary fight.   Neither message was delivered with a two-by-four, but rather a dagger and a smile.  Setting aside political differences and some galling hypocrisy, this was an A-plus political performance.

(5) Sen. Elizabeth Warren's speech was a letdown, energy-wise.  She lit into Donald Trump and the Republican Congress in a typically shrill and partisan manner, but the audience -- perhaps still dazzled by the First Lady -- didn't eat it up. The text itself was uninspiring and her delivery was flat. A dull note from an unlikable radical.

(6) Sen. Bernie Sanders had his moment, soaking in a five-minute standing ovation from a packed house. He reveled in the adulation, boasted about his campaign, and thanked his supporters. When the Vermont Senator finally got around to making the case for Hillary, he was met mostly by cheers, with audible boos mixed in. The DNC leak's revelations are still raw here, after all; plus, Mrs. Clinton is the human embodiment of the rigged, privileged, establishment system Sanders has bashed throughout this cycle. A number of his delegates were in tears. He went on to outline his reckless, harmful, unaffordable agenda, assuring wary supporters that Hillary is more friend than foe in achieving his desired Statist ends. He invoked "the revolution," and insisted that his insurgent campaign only marked the beginning of transforming America into a full-blown, Left-wing welfare state -- bragging that the party's new platform is the most extreme document they've ever produced. The soul of the Democratic Party is now firmly with Barack Obama, Liz Warren, and Bernie Sanders. Not the Clintons.

Two final thoughts: First, I may be wrong, and may be proven so very soon, but I suspect that the divisions in this building will be less vociferous and disruptive over the remainder of the week. The visceral anger and frustration has been vented, and Bernie made an impassioned case for (most of) his most ardent backers to back off moving forward.  Second, despite their profound wrongness on almost everything, Democrats nailed their stagecraft.  They exploited the key 9:30 to 11pm hours to drive home core messages, building toward the big event (Bernie's speech, in tonight's case).  The place was packed and loud for the televised pageant's crucial final hour.  The RNC unforgivably squandered the 10pm hour twice last week.  Imagine how much bigger Trump's polling bounce might have been if his campaign had designed a competent program.  Compare and contrast:

Dems have the stagecraft right, at least. Packed house in primetime, unlike Mon/Tue in Cleveland. #DNCinPHL pic.twitter.com/WH2LgglWy5