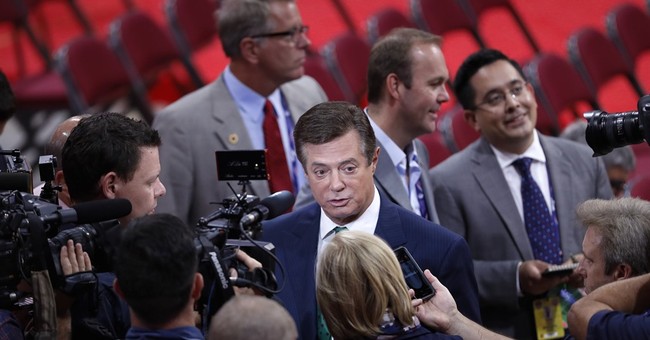 CLEVELAND, OHIO - It doesn't feel like a normal major party convention because it isn't one. While rally 'round the flag-style unity is typically the order of the day at these events, there's a prevailing sense of unease hanging in the air here. There are the enthusiastic true believers, the reluctant supporters, the resigned no-choicers, the conflicted undecideds, and the disaffected Never Trumpers -- in addition to some angry ones. And then there are the scores of GOP elected officials who aren't even showing up at all, by design. A substantial majority of Republican-leaning voters are dissatisfied with their nominee. With tonight's "Make America Safe Again" primetime programming just hours away (expect a special emphasis on 'law and order' contrasts), internal tensions are still boiling over into the open. Here is Trump's campaign chairman Paul Manafort drawing audible groans from the assembled Morning Joe crowd for slamming John Kasich over not attending the Cleveland confab, stating that the popular Ohio governor is "embarrassing his state:"

That remark comes near the end of the segment, earlier in which Manafort says he believes states such as New Jersey and Connecticut are in play for Trump -- echoing previous, dubious assertions about New York and California from Trump allies. Kasich, for his part, has addressed the NAACP's annual conference (Trump declined an invite) elsewhere in the state, and just rejected demands that he attempt to unilaterally suspend Ohio's open carry law for the duration of the convention. Meanwhile, party chairman Reince Priebus is scolding the 'Never Trump' crowd -- whose parade of procedural and tactical failures has not deterred them from trying to mount another doomed, last-gasp effort -- for helping Hillary Clinton:

Republican National Committee Chairman Reince Priebus said Sunday that if the "Never Trump" movement disrupts proceedings at the GOP convention, it will just help the presumptive Democratic nominee. "If [they] want to delay the proceedings, all they’re doing is delaying the evening and helping Hillary Clinton," Priebus said on ABC's "This Week." ...He said that opposing Trump now amounts to support for Clinton. "It’s a binary choice," Priebus said. "It’s Donald Trump or Hillary Clinton."

Challenged with problematic polling developments, Priebus said that the party's soon-to-be nominee has "a lot of space to grow."   That's one way of putting it.  Trump consistently polls between the high 30's and low-to-mid 40's. On the other side of the ledger, the Bush family are among the prominent party elders who will not be in attendance here -- drawing the ire of Newt Gingrich, who ripped them for "behaving childishly" on ABC News this morning:

Get over it, Newt says. No, Jeb replies, explaining his refusal to back the party's nominee (which he pledged to do at the very first debate here in Cleveland) in a Washington Post op/ed over the weekend. He's not alone. Anti-Trump columns and analyses from center-right figures have proliferated as his nomination draws closer.  Those who remain in open revolt are a relatively small contingent here.  Other party figures who reside in the "resigned no-choicers" camp described earlier are holding their team's standard-bearer at arm's length.  Marco Rubio will not come to Cleveland this week as he defends his Florida Senate seat against this man; he'll address delegates via pre-recorded video.  (Speaking of Rubio, read this piece about how he and Ted Cruz still aren't all-in for Trump).  And House Speaker Paul Ryan, who has endorsed Trump, seems eager to talk about almost anything other than the man for whom he'll vote in November:

Jonah Goldberg, a persistent Trump critic in the National Review  tradition, is out with a column today preemptively making the case that the 2016 Republican National Convention is already a failure:

The 2016 Republican convention was set up for failure even before it began. Oh, it can still be a good show. It could give Donald Trump a bump in the polls, long lasting or otherwise. Trump might even give a good speech off the teleprompter. But the purpose of conventions — indeed, the point of the entire nominating process — is not to crown whoever gets the most votes, like a gold medal for coming in first at the Olympics. The purpose is to unify the party around a nominee. And that’s it...Both literally and figuratively, the 2016 convention failed before the first gavel fell. Why? Because the party is so divided that many — and I mean many — leading Republicans couldn’t meet face-to-face even if they wanted to. The convention is in Ohio Gov. John Kasich’s backyard, and he’s not coming. Neither is Ohio Sen. Rob Portman. No living GOP presidential nominee is attending, save for Bob Dole. Many of the party’s best and brightest elected officials — Rep. Trey Gowdy, Sens. Ben Sasse, Kelly Ayotte, Marco Rubio, Rand Paul — aren’t going, either. Those who are going, such as Sen. Tim Scott and Gov. Nikki Haley, are not on the official list of speakers. Trump himself admitted the problem Saturday when he said, somewhat grumpily, that he picked Indiana Gov. Mike Pence for “party unity.” It is perfectly legitimate for Trump supporters to grouse about such dissent. But the grousing misses the point. No matter who is right, the fact remains that the party is deeply divided.

Jonah goes on to note that while it's true that Trump won the most votes of any Republican presidential primary contender in history, it's equally true that he's won the lowest share of the GOP primary vote of any eventual nominee since the modern era of balloting began in the 1972 cycle. His percentage of the vote was lower than even John McCain's 47 percent plurality in 2008.  In any case, this week's proceedings will by and large present an outward-facing simulacrum of unity and normalcy. But beneath the surface, that apparent unity is anxious and disquieted at best, and that normalcy is about as authentic as the "reality" of reality television. And away we go...