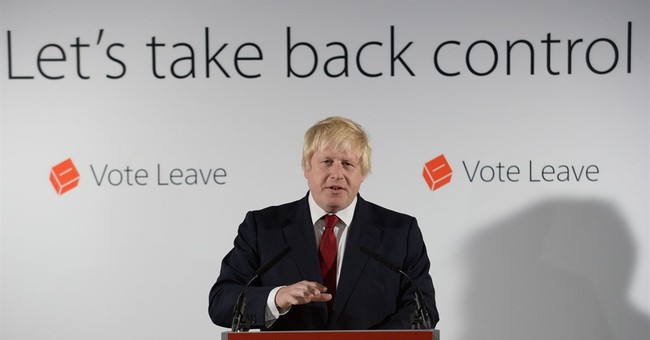 If you haven't done so already, do yourself a favor and watch British Prime Minister David Cameron's resignation speech in the immediate aftermath his country's citizens defying the polls and shocking the world with an epochal vote to exit the European Union. Pressured by elements of the Tory and UKIP center-right, the Cameron pledged to allow the referendum back in 2013, then lobbied hard against the 'Leave' campaign. Labour's leadership did, too.  But a coalition of voters from across the ideological spectrum spurned warnings that an EU departure could be economically disastrous, choosing to cut ties with the supranational governing structure. The top reason cited by those who joined the 'Leave' majority was the restoration of national sovereignty.

Defeated, Cameron's address was short, conciliatory, magnanimous and humble. He said that new leadership will be needed to negotiate the UK's voluntary departure from the EU and vowed to resign before the Conservative Party's annual meeting in October. The man who is the odds-on favorite to succeed Cameron as Prime Minister is Boris Johnson, a conservative MP and the former Mayor of London. Johnson -- a leading face of the "Leave" campaign, and a provocative populist -- adopted a statesmanlike tone in declaring victory for the cause on Friday, seeking to reassure Britons on both sides of the 'Brexit' question that the UK will remain a stable and prosperous beacon of democracy. Amid much media hysteria, market volatility, and apocalyptic sore loserdom from some on the "Remain" side, Johnson's brief, focused speech was a welcome call for calm and unity. Watch:

Some people are now saying that was wrong and that people should never have been asked in that way. I disagree, it was entirely right and inevitable and there is no way of dealing with a decision on this scale except by putting it to the people. Because in the end this decision is about the people, the right of people in this country to settle their own destiny. The very principles of our democracy, the rights of all of us to elect and remove the people who make the key decisions in their lives. And I think that the electorate have searched in their hearts and answered as best they can in a poll the scale the like of which we have never seen before in this country. They have decided it is time to vote to take back control from a EU that has become too opaque and not accountable enough to the people it is meant to serve. In voting to leave the EU, it is vital to stress there is no need for haste, and as the prime minister has said, nothing will change in the short term except how to give effect to the will of the people and to extricate this country from the supranational system...

It is the essence of our case that young people in this country can look forward to a more secure and more prosperous future, if we take back the democratic control which is the foundation of our economic prosperity. We have a glorious opportunity, to pass our laws and set our taxes entirely according to the needs of the UK, we can control our borders in a way that is not discriminatory but fair and balanced and take the wind out of the sails of the extremists and those who would play politics with immigration. Above all, we can find our voice in the world again, a voice commensurate with the fifth biggest economy on earth. Powerful, liberal, humane, an extraordinary force for good in the world. The most precious thing this country has given the world is the idea of parliamentary democracy. Yesterday, I believe the British people have spoken up for democracy in Britain and across Europe and we can be proud of the result.

Before you go, read Charles C.W. Cooke's essay on next steps -- from the 'hangover' effect to the plodding steps toward formal extrication.