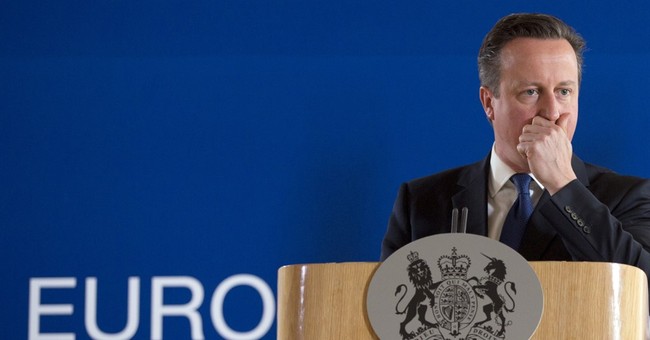 UPDATE: Many said that Prime Minister David Cameron’s position was untenable after the Brexit vote. It looks as if he agreed with those assumptions. He announced his resignation outside of 10 Downing Street this morning. He is going to remain as a caretaker, occupying the post until a new prime minister could be selected. Cameron hopes that process could finished sometime in October (via WaPo):

British voters defied the will of their leaders, international allies and European Union partners by opting to rupture this country’s primary connection to Europe in a stunning result Friday that threw financial markets into turmoil and forced Britain’s prime minister into his own exit.

As Britain absorbed the stunning news, the political fallout reached to the highest level with Prime Minister David Cameron saying he would step down after championing the campaign to remain in the European Union.

Cameron said the country now deserved “fresh leadership” in the face of the rejection he and the supporters of the “remain” campaign suffered in Thursday’s referendum.

Cameron, who enjoys a close relationship with President Obama, said he hoped a new prime minister could be in place by October.

Cameron to continue in post as PM for next 3 months. New Tory leader and new British Prime Minister by Tory conference in October

Editor's Note: This post was written when Cameron was first reported to remain as British PM. Edits have been made.

Prime Minister took a gamble with pledging his support for the “Remain” camp in the Brexit vote and lost. Last night, the voters of the United Kingdom said they’ve had enough being part of a political project that envisioned an eventual United States of Europe. By a 52-48 vote, said they were willing to give the European Union the boot. So, given the consequences of this vote, which is bound to impact an entire generation, can Cameron remain prime minister? [See update above] The Wall Street Journal offered some outcomes prior to the counting of the ballots:

Mr. Cameron has throughout the campaign said he plans to remain in office, regardless of the vote. However, some experts and members of his own Conservative Party say his pro-EU stance may make his position untenable if the country does vote for Brexit. And the Conservative Party has a mechanism for forcing him out if he doesn’t go willingly.

If he did decide to go, Mr. Cameron would likely announce his resignation as head of the Conservative Party but stay on as Prime Minister until a successor is found. An alternate view holds that Mr. Cameron could hang-on, receiving credit from some pro-exit supporters in his party for having held the referendum at all.

The Journal also added that the Conservative Party, being one that is susceptible to division over the EU, wouldn’t be so willing to mount another general election, especially after this referendum. Yet, it would still have to hold an election on who will become the next leader of the Conservative Party, which would be decided by Conservative MPs. After the results were tallied, the publication added that if Cameron remains, he was expected to have a massive restructuring of his cabinet, or he could be removed entirely in a vote of no confidence motion put forward by his own party. Yet, neither of these scenarios will come about since Cameron announced his resignation. A new prime minister is expected to be selected by October.   I guess we could all see the writing on the wall, given the amount of political capital he invested in this Brexit fight, which ended in total disaster.

This (probably) means the end of the UK as we have known it. Oh, and the government is pretty much shot, as well.

With pundits across the pond elaborating on how Cameron's career is finished, even after more than 80 pro-Leave Conservative MPs signed a letter urging Cameron to stay on regardless of the Brexit results, James Kirkup, executive political editor for the Telegraph, wrote (correctly) that even this show of support from his own party couldn't save Cameron—and that this referendum defeat could likely launch another Scottish independence vote. The United Kingdom itself as a political entity could be on the line:

It doesn’t matter that the result was narrow. Mr Cameron called this vote and he lost it. He told Britain to remain in the EU, and Britain chose to leave. No prime minister can survive that.

It may be that his initial reaction is to talk about staying on to lead the country through the difficult decisions to come: when and how to begin the process of departure from the EU, and so on. And that may happen.

But those decisions will in reality be made by others: Boris Johnson and Michael Gove and other Leave-minded Tories will call the shots for Mr Cameron, even if he remains in office for a few weeks while the Conservative Party crowns his replacement.

Equally, it may be that Mr Cameron talks about trying to heal the divisions the referendum has revealed and created.

But many will feel that he bears much of the responsibility for those divisions, not least because of the way he chose to campaign for Remain, aggressively questioning the judgement and even the integrity of those who stood against him.

The pattern of the results makes the blow to Mr Cameron’s authority all the more grievous. Simply, he lost England and was left reliant on Scotland and London for support.

Before this referendum, Mr Cameron’s proudest achievement was probably preserving the Union by winning the Scottish independence referendum in 2014.

He didn’t call that vote, but he chose to call the EU referendum.

And as a result of a referendum he chose to call, the future of the UK itself is now in doubt, since Scottish independence is now one of many existential issues back at the top of the political agenda.

Senior Conservative members of parliament (MP) are saying they’ll give Cameron and his Chancellor of the Exchequer, George Osborne, a “dignified exit,” according to ITV News national editor Allegra Stratton. She projects that Cameron won’t be PM by Christmas, but it looks as if he could be gone as soon as this fall. Cameron suffered a political blow that he probably knew he could never recover from, so resignation or firing seem to be likely outcomes. In the end, it was the former outcome for the now soon-to-be former prime minister.

My sense is that David Cameron can't be in charge by Christmas. Senior Tories across the party feel he can't be man to negotiate this.

Am being told that Cameron and Osborne are finished. There will be a "dignified exit" say senior Tories. "Not immediate".