Fact Check: WaPo Gives Democrats Many Pinocchios For These False Claims on Guns 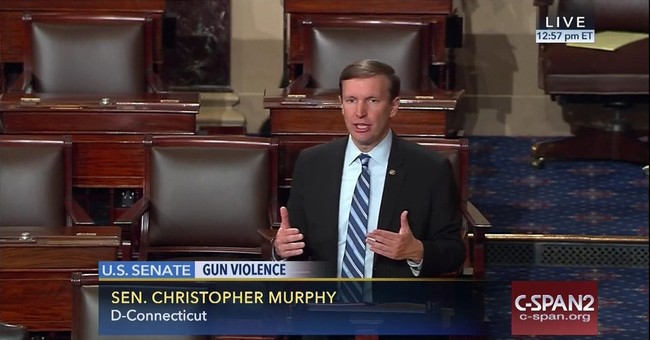 The entire purpose of my satirical piece demanding the immediate defunding of Planned Parenthood and reconsideration of the Supreme Court's gay marriage ruling "as a result of" the Orlando terrorist attack was to promote fact-based rationality in policymaking, even in the wake -- or especially in the wake -- of a terrible event.  "Public policy should be crafted based on evidence and empiricism, ever mindful of the constitution, even when it's politically inconvenient. Our discourse should encourage thoughtful disagreement, not seek to squelch it by serially impugning others' motives.  Our analysis of stomach-turning violent instances should be rooted in reality and fact, not shoe-horned into pre-existing ideological narratives," my author's note read.  As Matt noted over the weekend, national Democrats have reacted to the deadliest jihadist attack on US soil since 9/11 by launching a massive gun control push, employing a slew of inaccurate claims to stoke public sentiment.  These numbers are actually frightening, given the unambiguous evidence on the nature of the massacre. Again, Matt addressed these specifics over the weekend, but they bear repeating:

Gallup: Only ~3 in 10 Democrats see Orlando attack as more about Islamist terror than US gun violence. Blindness. pic.twitter.com/AS2ZXbaNeR

We can't even agree on the problem, even though there is a correct answer to that question. With the Left in the throes of a 'blame-the-terrorist's-tools' PR campaign, the Washington Post's fact-checker reminds them that they're entitled to their own opinions, but not their own facts. The paper reviews three major claims advanced by Senate Democrats and their staffers, and find them all wanting. First, Connecticut Senator Chris Murphy gets dinged for lying about the correlation between strict gun laws and fewer gun homicides:

As it turns out, we had carefully checked this chart when President Obama made a similar but more carefully phrased claim about “gun deaths.” Note that Murphy referred to “homicides” and “gun crimes.” President Obama earned Two Pinocchios. Readers can check the full fact check, but in summary, we noted that most gun deaths — more than 60 percent in 2013 — are actually suicides. The data used in the National Journal chart calculates the number of gun-related deaths per 100,000 people by including all gun deaths, including homicides, suicides, accidental gun deaths and legal intervention involving firearms. We removed suicides from the totals and reran the numbers — and in some cases, it made a huge difference. Half of the 10 states with the lowest gun-death rates turn out to be states with less-restrictive gun laws.

Murphy earns three additional Pinocchios for a statement about the impact of "assault weapon" bans.  Also, like the New York Times, he references the AR-15 rifle, which was not used in Orlando:

There is significant contrary data that shows the 10-year assault weapons ban had little, if any, effect. A 2004 study for the Justice Department found that the ban’s impact on gun violence was mixed, at best; if the ban were renewed, the “likely effects on gun violence are likely to be small at best and perhaps too small for reliable measurement.” The report said that assault weapons were “rarely used” in gun crimes...Did the assault weapons ban make a difference in mass shootings? Not significantly, according to Fox’s data...“Our study seems to indicate that both the Federal assault rifle ban and individual State assault rifle bans do not affect the likelihood that an assault rifle was used in a mass shooting,” Blau said.

Finally, the Post hits Harry Reid's spokesman for quoting a terrorist about American gun laws. Shockingly, the terrorist was wrong on the facts:

Even terrorists get their facts wrong, which is why Senate leaders should not uncritically quote them. As Reid put it, “This terrorist was talking about the gun show loophole. He was specifically pointing to a flaw in our nation’s gun laws that allows convicted terrorists to slip through — and it’s a big, wide hole to slip through.” Actually, you can’t buy a “fully automatic assault rifle” at a gun show. The al-Qaeda spokesman — and by extension Reid — are mixing up semiautomatic weapons and automatic weapons.

The Senate Minority leader's office is uncritically quoting an Al Qaeda terrorist's incorrect propaganda about US gun laws in order to push for limitations on American citizens' Second Amendment rights. Embarrassing. Regardless of one's views on guns, policy questions should be debated and addressed based on facts. I'll leave you with my criticism of CNN's Anderson Cooper on Fox's Media Buzz over the weekend. As I wrote last week, Cooper -- usually a solid, talented journalist -- appeared to cross into activism in an interview with Florida Attorney General Pam Bondi (via Right Sightings):

Jonah Goldberg has more thoughts on this front:

Imagine if an Islamist nutter went to the convent of the Little Sisters of the Poor and murdered a bunch of nuns (alas, hardly an unimaginable hypothetical). Would I be right to say that the New York Times and its allied Brain Trusts have no right to be outraged? After all, liberals have heaped scorn and contempt on those nuns for their effrontery in not wanting to be forced to pay for birth control. Or what if an Islamist shot up a Baptist Church or Koch headquarters or the Washington office of AIPAC? To borrow a phrase from the New York Times, hatred for Christians, libertarians, Zionists, and other political minorities doesn’t “occur in a vacuum.” The Times has been fanning the flames of such demonization for decades; surely they would share some of the blame when an emotionally unstable Muslim, inspired by ISIS, took it upon himself to slaughter innocent people. No, the analogy isn’t perfect, but it doesn’t need to be because there’s a lot of margin for error when comparing competing idiocies. It’s incredibly stupid to use a hair dryer in a bathtub. It’s also incredibly stupid to try to take a selfie with a grizzly bear nursing its cubs. The two things are hard to compare on the basic fact patterns, but what they share equally is a fatal idiocy. I’m against polygamy. But I’m also against people in polygamous marriages being slaughtered by terrorists.

That last point should be elementary to any rational person.  But rationality is not winning the day.  By the way, Cooper wasn't the only CNN anchor to tendentiously call out Republican "hypocrisy" or "responsibility" for an American-born jihadist's mass-murder at a gay nightclub. Has CNN pressed any Democrats on why the killer chose to become a member of their political party?