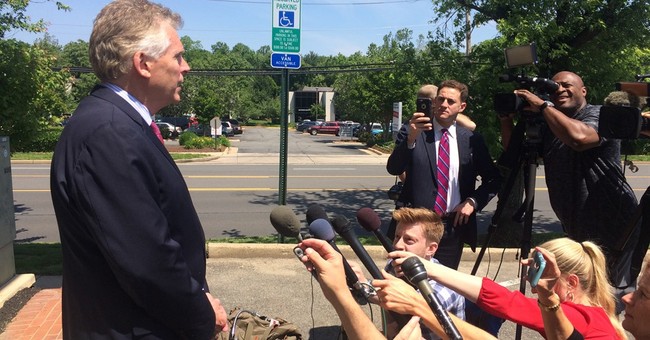 We learned this week that Virginia Governor Terry McAuliffe, the former DNC Chairman and close Clinton ally, is under active federal investigation. At least one issue under scrutiny is a donation to McAuliffe's 2013 gubernatorial campaign received from a wealthy Chinese businessman who previously served as a delegate to the Communist country's show parliament. The governor's team has insisted that he did nothing wrong, and that the contributions were legal because the man in question holds a US green card (in case you'd forgotten, McAuliffe has a checkered history with Chinese nationals and green cards). Considering that the feds' probe stretches back to 2015, one might concluded that there's more "there" there than McAuliffe suggests, especially given his rapid shifting story about the nature and extent of his relationship with Wang Wenliang. At first, the governor claimed he couldn't recall ever meeting the man (timeline via America Rising):

This all has "nothing to do with" the Clintons' so-called charity/slush fund, he says, even though the investigation has reportedly examined his conduct in connection with the Clinton Global Initiative.  After the New York Times debunked the 'not sure if I've even met him' spin, McAuliffe's tune abruptly changed.  Actually, maybe there were some short conversations after all. Perhaps over coffee:

He also insisted there were "zero" personal ties between himself and Mr. Wang. Which brings us to the kicker.  Please enjoy the exquisiteness of this Time magazine scoop:

Virginia Gov. Terry McAuliffe invited the Chinese businessman whose donations to him have been named as a focus of Justice Department investigators to a 2013 fundraiser at Hillary Clinton’s personal Washington, D.C., residence. Wang Wenliang, a Chinese national with U.S. permanent residency, briefly shook Clinton’s hand at the Sept. 30 event, a representative for Wang told TIME. An American company controlled by Wang made a $60,000 contribution to McAuliffe’s campaign three weeks before the fundraiser. Less than a month later, a separate Wang company pledged $500,000 to the Clinton Foundation, the first of several donations that eventually totaled $2 million. The fundraiser was one of at least three interactions between Wang and McAuliffe, according to the businessman’s representative. McAuliffe initially told reporters this week he could not remember ever meeting Wang, though he later clarified that his staff had informed him of several likely meetings. “I did no deals,” McAuliffe said Wednesday in a radio interview. “I would not know the man if he sat in the chair next to me.”

Oops. Terry and his old pal Hillary are on quite the veracity-impaired roll this week. I'll leave you with this, just for fun:

News of the McAuliffe probe comes one day after he held a high-dollar fundraiser for Hillary Clinton. https://t.co/eGAm8QKdUK (h/t @jeneps)