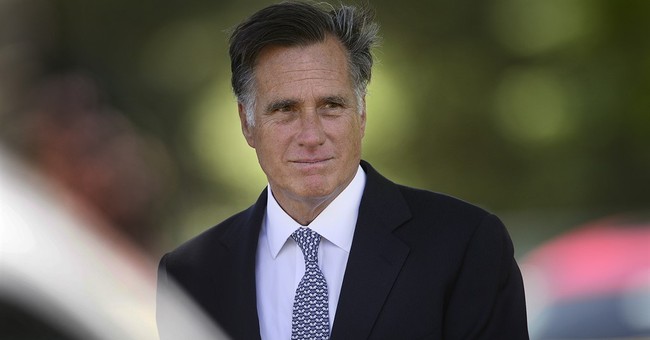 Having evidently failed to help recruit a serious third-party challenger to the extraordinarily weak Trump/Hillary dichotomy, former GOP nominee Mitt Romney is facing increasing pressure to take the plunge himself.  Click through and read those pieces, and you'll find cogent, earnest supplications from conservatives who are horrified by Trump -- and whose interest is piqued by a recent raft of polling data suggesting that the voting public may be ripe for a mainstream independent presidential bid.  We'll take a look at some of that data shortly, but let's start with some hard reality:  A 'control-F' search for the word "deadline" within those three hyperlinked analyses turns up a sum total of zero references.  Here's why that omission matters:

From a practical standpoint, it's getting awfully late to jump into the presidential race. The filing deadline to make the November ballot has already passed in Texas, the most Republican of the big states, and other deadlines are fast approaching. Ballot access has long been one of the biggest impediments to a viable third-party bid. The Democratic and Republican parties are quite content with their duopoly and haven't made it easier for others to compete.

I understand that the #NeverTrump third party theory rests on the idea that a Romneyesque figure could peel off just enough electoral votes to deny both Trump and Clinton the 270 electoral votes required to secure the presidency. According to the constitution, this scenario would send the decision into the Republican-held House of Representatives. So the Texas deadline expiring isn't a deal-breaker, theoretically, because the goal would be for an independent ticket to carry, say, a handful of states in the Midwest and Mountain West. As implausible as this scheme may sound -- and it sounds exceedingly implausible -- it's not technically impossible. Especially when you take a gander at numbers like this:

Hypothetical three-way race, if Romney were to jump in: pic.twitter.com/Jbtz1jZevF

And among independent voters:

These data points come to us via the Washington Post/ABC News survey we wrote about yesterday, which also found that a sizable 44 percent contingent of registered voters would consider a third-party candidate. (FOr what it's worth, NBC/WSJ asked the same question, with nearly the same result). Romney -- who enjoys strong name recognition based on the last campaign -- is already well above the polling threshold required to secure a spot in the general election presidential debates (Libertarian Gary Johnson and his would-be running mate have cracked double-digits in another poll). WaPo's hypothetical three-way poll once again demonstrates how weak and disliked Hillary Clinton is.  Trump and Romney's combined backing would surpass her level of support by 20 points, yet splitting the anti-Clinton vote seriously risks allowing her to win the presidency with a small plurality of the popular vote. That's why the Republican Party is circling the wagons, including capitulations from even staunch Trump resisters like Sen. Lindsey Graham.  Still, given the public's longstanding and deep-seated antipathy toward both Trump and Clinton, it's not hard to see why a guy like Romney might be tempted to jump in with a splash, make a focused appeal to voters, and see what happens.  He could (probably convincingly) present himself as a center-right politician with whom many voters might have disagreements, but who is nevertheless qualified, dignified -- and neither a reckless, ignorant demagogue, nor a serially deceitful crook.  Not a terrible pitch.

But while some right-leaning Trump critics might leap at the opportunity to cast a ballot for Romney over the other two alternatives, a credible case that he could actually prevail remains elusive.  Worse, the reasonable fear that he'd guarantee a Hillary presidency is likely to worry even those who are strongly sympathetic to his cause.  Elections have been held, a decisive plurality of GOP voters have spoken, and a vast majority of the party appears to be reconciling itself to the resulting determination.  Principled holdouts will still have other options in November (e.g., the aforementioned Johnson/Weld duo), but tossing another non-Democrat option into the fray really does feel like an assist to Clinton at this stage.  On a personal level, Trumpism does not represent me in virtually any way, and I plan to cast a ballot against both Trump and Clinton in November.  But it's simply a fact that for better or worse, the Republican Party is the only viable vehicle for defeating the Left in modern American politics, and the Republican Party's voters have seen fit to make Donald Trump their standard-bearer this year.  My inclination is that it's time to allow Trumpism to sink or swim on its own.  As enticing as a Romney gambit might be for those of us who cannot fully make peace with Trump as the nominee, why hand Trump's hardcore base a ready-made excuse if he loses?  And why do anything to actively assist Hillary Clinton?  However, for a window into why 'Never Trump' efforts nevertheless persist in some righty quarters, I'll leave you with further evidence that both major party nominees are deeply invested in the same sordid system, and share many of the same sleazy friends:

News of the McAuliffe probe comes one day after he held a high-dollar fundraiser for Hillary Clinton. https://t.co/eGAm8QKdUK (h/t @jeneps)

"As part of the probe, the officials said, investigators have scrutinized McAuliffe's time as a board member of..Clinton Global Initiative"

And Trump is a major McAuliffe donor, because of course he is.  Pass the Pepto-Bismol.