Hillary: Every Single Woman in America Should Have Federally-Mandated Contraceptive Coverage 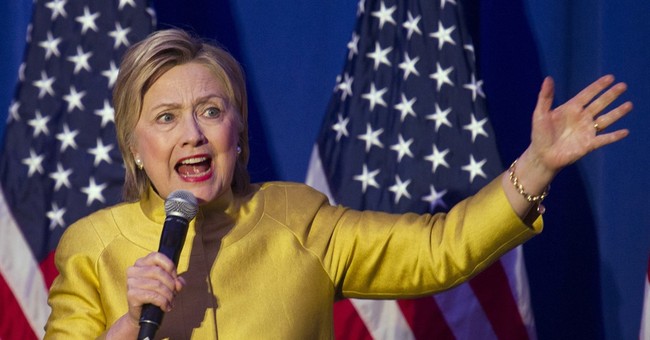 When Hillary Clinton personally tweets something, it's a very special occurrence. She makes her subjects aware that the Royal Thumbs have conveyed the particular sentiment by tacking her "-H" signature onto the end of the message. We've tackled some of her tweets in the past, and the time has come to do so again. In the aftermath of a divided Supreme Court's decision to remand its latest contraception mandate ruling back down to lower courts in search of a compromise, Mrs. Clinton tweeted the following:

Every woman, no matter where she works, deserves birth control coverage. This shouldn't be a question. #SCOTUS -H

A specious, simplistic pander.  The High Court's recent move represented a temporary victory for the Little Sister of the Poor, a group of Catholic Nuns with whom the Obama administration has been locked in a years-long legal battle.  The White House wants to force these nuns to facilitate the purchase of forms of birth control that violate their faith's fundamental teachings. The editors of USA Today opined in March that the administration ought to broaden the carve-out of its coercive contraceptive decree to include religious groups and organizations such as the Little Sisters, which hardly seems like an unreasonable accommodation in a nation that was literally founded on religious liberty.  The White House has fought tooth and nail to avoid doing so, in pursuit of the radical new "right" it invented out of whole cloth as an Obamacare regulation. Does Clinton actually believe that her preening standard applies to women who work at churches and live in convents?  Are there zero exceptions to this so-called principle in Hillary's mind?  Does she truly believe that literally every single woman is constitutionally entitled to have her birth control paid for by her employer, under penalty of law?  It's entirely possible.  Or maybe it's her latest "girl power" sop to an extremist left-wing base that doesn't trust or like her very much.

It's worth remembering that the Court ruled in its landmark 2014 Hobby Lobby decision that closely-held private businesses owned by deeply religious individuals or families who objected to certain birth control methods could not be forced to comply with the Obama administration's unprecedented mandate that required them to pay for these products.  This was, for the record, in no way a "ban" on birth control, nor did it "limit access" to birth control.  The pill and an array of other options remain readily available and affordable across the country.  It was a matter of the federal government compelling religious objectors to pay for those products, under threat of heavy fines.  In light of the Hobby Lobby ruling, applying the same standard to, say, Catholic nuns and explicitly religious institutions may seem like a lay-up.  But after Justice Antonin Scalia's death, the Court is (tragically) deadlocked on what many constitutionalists view as a cut-and-dried legal principle, hence the 4-4 punt.  Another piece of relevant context: The Hobby Lobby case hinged on the application of the federal Religious Freedom Restoration Act, which was signed by...Bill Clinton in 1993, after overwhelmingly sailing through Congress:

Today, RFRA's are often hysterically rejected as mean-spirited bigotry by the Left, including some of the same people who clapped during that ceremony. This is an especially potent piece of evidence of how drastically the Democratic Party has moved to the Left in recent years, and it helps explain why Hillary Clinton evidently feels obliged to actively deceive when claiming to be the paragon of consistency:

Kudos to that editor for shearing a "Hillary lies" montage to just 13 minutes.  Incidentally, the video skips over the most glaring email scandal lie of them all (and leaves out lying to the Benghazi families altogether): "There is no classified material."  False. Totally, breathtakingly, possibly criminally false.