Trump: Look, the RNC is Going to Have a 'Rough July' if it Doesn't Fix These 'Rigged' Rules 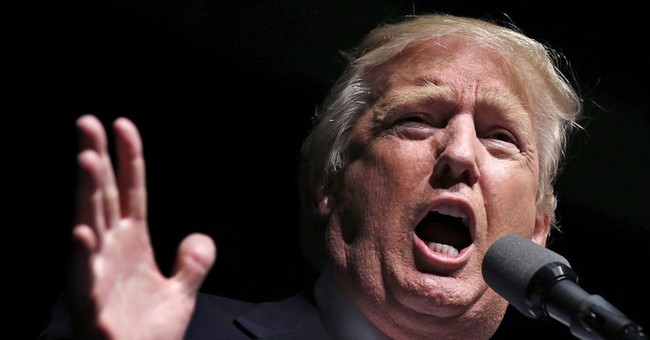 Ted Cruz swept another state over the weekend, tacking 14 additional delegates onto his overall tally (securing 23 of Wyoming's 26 delegates overall), while diligently chasing down delegates elsewhere. Donald Trump's campaign employed an odd World War II analogy in insisting that it didn't make any play in Wyoming, as Trump surrogate Sarah Palin ridiculed the "lamestream media" for falsely reporting something that...the state Republican Party had announced in a press release. The GOP frontrunner has been stoking anger over the party's nomination rules ever since his comprehensive loss in Colorado.  Beyond "writing" a Wall Street Journal  op/ed that didn't even remotely mirror his signature tone, Trump encouraged his followers to express their outrage over the "rigged" system by attending a major protest in Denver. A rally happened, alright, but I'll let you be the judge of whether it qualified as "major:"


Trump has become a virulent critic of a nominating process about which he didn't start whinging until after his team's (ongoing) incompetence began to imperil his potential nomination.  He's even gone so far as to flat-out admit, "I only complain about the [states] where we have difficulty."  True.  For instance, the billionaire had no problem whatsoever with Florida's rules -- under which he was awarded all 99 delegates, despite winning a mere plurality in the primary vote.  If the system were "fair" and reflected the voice of "the people," Rubio and Cruz (whose combined support roughly equaled Trump's) should have accrued sizable contingents of convention delegates on March 15.  But that's not how the established rules were written.  All parties involved acknowledged this to be the case and adhered to the result, even though the rules were "fixed" in Trump's favor.  But that was then.  This is now.  And the current moment requires loud whining, so that's what Trump is doing:


What does he mean by "rough"?  It's hard to say with any certainty, but Trump himself, his henchmen, and his media mouthpieces have given us a pretty solid idea of what they might have in mind.  Just yesterday, Trump mused that he sure hopes a contested convention wouldn't devolve into violence.  RNC Chairman Reince Priebus has been pushing back against Trump's Donny-come-lately gripes on Twitter and in the media, correctly noting that each state established its delegate allocation protocols months ago to meet an October 2015 deadline. Nevertheless, Priebus reportedly texted RNC rules committee members (not to be confused with the crucial convention rules committee, which will convene in July) scheduled to meet this week in Florida not to adopt any rules changes that Trump could seize upon to inflame his narrative:

The chairman of the Republican National Committee has privately urged members of the party’s rules committee not to make changes to the guidelines governing the presidential nominating process, an effort to avoid the appearance that the party is seeking to block Donald J. Trump from becoming its nominee. The chairman, Reince Priebus, whom associates describe as increasingly frustrated by Mr. Trump’s criticism of the delegate-selection process, sent a text message last week to multiple rules committee members strongly suggesting that they not alter the convention rules when the party convenes next week for its spring meeting in Florida, according to two who received the message. Separately, a group of influential rules committee members held a conference call Thursday to prepare for the meeting and reached a consensus that they would derail any attempt at the gathering to make changes to the how the convention is conducted, according to a committee member on the call. “We’re not going to do anything with the rules next week,” said Rob Gleason, chairman of the Pennsylvania Republican Party and a longtime member of the rules committee. “There’s no point because new rules will be written at the convention.”


That last sentence is key. The convention rules committee -- comprised of one male and one female delegate from each state and territory involved in the nominating process -- will establish the 2016 gathering's rules and regulations, starting one week prior to the formal festivities kicking off in Cleveland in late July. The new rules must be adopted both by a simple majority of that 112-member committee and by a simple majority of all delegates on the floor. If the convention is a contested one, this process will be critical, which is why Cruz allies and other anti-Trump forces are seeking to place as many friendly votes on the committee as possible. But will Republicans witness the first open, multi-ballot convention in decades this summer? Cruz's April victories and sophisticated delegate maneuvering has increased that likelihood, but it's not a done deal by any stretch. Expect Donald Trump's bitter broadsides against the process to abruptly subside over the next few weeks, when he's expected to enjoy a delegate-rich winning streak, starting tomorrow in New York. May will probably get tougher again for Trump, with all eyes turning to June 7th's final delegate bonanza. It's probable that California will make or break Trump's drive to 1,237. We told you about Cruz's hugely important organizational advantage in the Golden State last week, the importance of which cannot be overstated. But a new CBS News poll out of California breaks with the recent trend of surveys showing a relatively close statewide race:

If this pans out, Trump's support could overwhelm Cruz's major org edge in CA. Other polls show race much closer: pic.twitter.com/3KcyTU0N8O


By all accounts, Cruz's ground game is far more advanced than Trump's but is it 18 points better? Even if other polls pointing to a closer race are more accurate, Allahpundit is right that with a few exceptions (notably Indiana, where good polling is shockingly scarce), Cruz should more or less park himself out in California for the next seven weeks. I'll leave you with three items: (1) FiveThirtyEight's outstanding, thorough breakdown of the delegate rules for each of the remaining 17 states, only five of which are purely winner-take-all. Of those five, two favor Trump (NJ + DE = 67 delegates) and three favor Cruz (NE + MT + SD = 92 delegates). The rest feature some form of proportionality, including a number of complex hybrid systems. (2) John McCormack's analysis of how the political terrain in those contests looks at the moment, and how things may shake out. (3) A reminder that Trump fans high-fiving over CBS News' California numbers should also take note of what the network's latest general election data reveals: