By the Numbers: Cruz Crushes Trump in Wisconsin 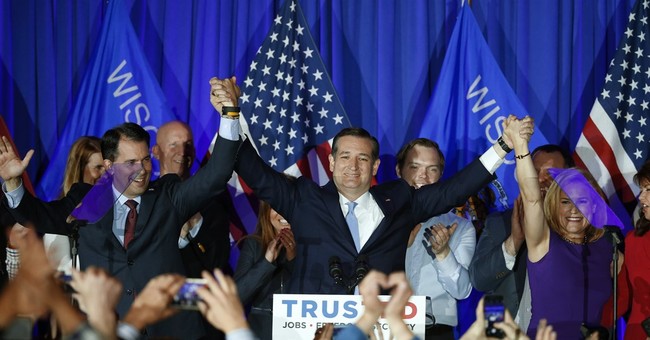 Ted Cruz didn't simply defeat Donald Trump in Wisconsin last night, he dealt The Donald a full-fledged Badger State beatdown. A few data points and observations from a big night for Team #NeverTrump.  (1) Cruz swept virtually every demographic, with rare exceptions like "moderate/liberal" primary voters. Cruz even bested him among voters with little formal education -- or "the poorly educated," as Trump refers to that core element of his base. This is exactly right:

This is important. It's not the establishment against Trump, it's conservatives. https://t.co/jrlPbocvhr


(2) Surprisingly, there wasn't much of a gender gap at play, mostly because Trump got blown out among both men and women. Still, two-thirds of Wisconsin's female GOP electorate rejected him. Not coincidentally, some of the loudest and most sustained cheers during Cruz's victory speech (below) came for his wife Heidi, whom Trump threatened and insulted in recent weeks. After preposterously claiming that he didn't realize one of the offending images he retweeted was unflattering to Mrs. Cruz, Trump finally admitted that he amplified it as 'retaliation' against the Texas Senator, to whom he'd (wrongly, according to his own campaign manager) attributed an attack on his own wife.

(3) How unpopular was Donald Trump among members of his recently (and likely temporarily) adopted political party? Two indicators:

How Wisconsin GOP voters would vote if Trump and Clinton were the nominees: https://t.co/Z05BamoaL5 pic.twitter.com/pax5s6eDlz


(4) Wisconsin is the latest in a string of polling failures. The final RCP average measured Cruz's lead at just shy of a five points. He ended up thumping Trump by double digits. Part of this lousy margin prediction is attributable to a last-minute garbage poll from ARG (Trump +10), whose operators may want to consider another line of work:


(5) Trump was characteristically tacky and conspiratorial in defeat, attacking "Lyin' Ted Cruz" in a brief statement that appears to have been crafted by a group of fifth graders trying to show off their big words. Please note the Harry Reid-style baseless criminal allegation, the only "evidence" of which has been Trump's own assertions -- which, in turn, have been undermined by his own campaign:


It's unclear how Trump "withstood" the "establishment onslaught" in any way.  In reality, he got pounded by a conservative, who was loudly supported by Wisconsin's powerful conservative talk radio community, as well as the state's accomplished conservative governor -- who is wildly popular among Wisconsin conservatives. It looks like Trump's decision to attack Walker with debunked left-wing attacks, and for not raising taxes, was a mistake. Go figure.

(6) Last but not least, Hillary Clinton got pasted by Bernie Sanders, losing by by a wide margin. If not for Democrats' undemocratic Super Delegates scheme, this might be a real race.  Looking forward, it's genuinely extraordinary how weak and disliked both parties' frontrunners are among the American electorate. Fortunately for Mrs. Clinton, her likeliest opponent is weaker and more disliked than she is. Trump's path to the nomination narrowed last night, there's no doubt about it. But he remains the frontrunner, and has a real chance to make up some of the lost ground in his home state of New York on April 19th.  I'll leave you with Cruz reveling in his victory, delivering remarks that really could and should have been more sharply honed: