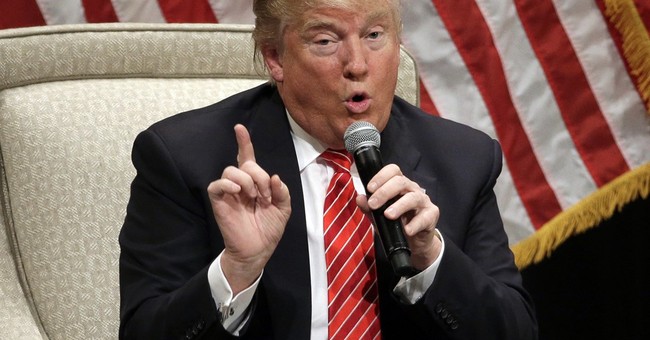 Before you dive into this clip, take note that Trump's inquisitor here is Charlie Sykes, perhaps the most influential voice within Wisconsin's vibrant talk radio culture. Like many principled conservatives, Sykes is so strongly opposed to Trump that he's vowed never to support him in any election, a fact Trump admits he didn't know heading into the conversation. Remember, we're told that voters needn't worry about the reality star's vast, unnerving ignorance because he'll be surrounded by the very best people --  like a press team that either didn't realize or didn't bother to inform their boss that he was walking into a very tough exchange with a prominent #NeverTrump radio host ahead of an important primary election.  It's almost as if Trump's press office is comprised of overwhelmed amateurs who routinely fail to perform important due diligence.  In any case, I strongly recommend listening to the fill 17 minute interview, which features very tough but respectful questioning from Sykes.  To his credit (setting aside several of his nonsense answers) Trump maintains his composure throughout the discussion, even managing to sound a few magnanimous notes when things get rocky:


A few thoughts about the interview, followed by some notes on the GOP race:

(1) Trump's excuse-making over his mean-spirited Heidi Cruz attacks are factually inaccurate and insulting to listeners' intelligence.  Ted Cruz did not "start" this feud, as Trump claims.  Cruz didn't post the picture of Trump's wife; to the contrary, he quickly condemned it and praised Mrs. Trump.  The offending party was actually an anti-Trump SuperPAC that spent a pittance on the Facebook ad.  If Cruz had coordinated with 'Make America Awesome' on this microscopic ad buy, as Trump baselessly alleges, that would constitute an election law crime.  Does Trump even know this?  Either way, he proceeds to blame his nasty response on his supporters, preposterously pretending that he didn't realize the image he retweeted was intentionally unflattering to Mrs. Cruz.   Most people aren't nearly that stupid, no matter what Trump may have learned from interacting with some of his supporters.  Also, is Trump contending that he isn't responsible for the vitriol he chooses to amplify through his massive social media presence?  And how are his followers to blame for his initial threat to "spill the beans" on Heidi Cruz's past struggles with depression?  After Trump unleashes his whirlwind of spin and refusals to apologize, Sykes pointedly reminds him that this is a presidential race, not a "playground" dispute.  Ouch.

(2) When Sykes calls Trump out for his routine, casual repetition of discredited left-wing smears against Scott Walker's conservative record late last year, Trump blames Time magazine.  Two problems: First, Walker and fact-checkers set the record straight at the time, but Trump blithely ignored the facts and  continued spouting the debunked criticism anyway.  Second, Trump's justification seems to be that he'll believe anything he sees in the media -- for whom he professes total contempt on a daily basis -- so long as it helps him bash a "fellow" Republican he views as a threat.  Why should conservatives view him as a measured, reliable ally, in light of his capricious 'say anything' approach?

(3) A few more odds and ends that caught my attention: In defending his many donations to liberal Democrats, the billionaire suggests that he was a Republican throughout his public life.  This simply isn't the case, based on his own words and his evolving party affiliation record.  He talks about the urgency of our national debt, but opposes and demagogues desperately-needed reforms to our entitlement programs, which are the largest drivers of our long-term debt.  His explanations for how he squares this fiscal circle are mathematically incoherent.  He also repeats his story about Paul Ryan calling him recently, seemingly intimating that party leadership is getting behind him; Ryan's office has made clear that this conversation was initiated by Trump. His response to questions about his problem with women voters is easily refuted by his own conduct over many years, including very recently. And when confronted with his terrible favorable ratings and dead-last standing against Hillary Clinton head-to-head, Trump retreats to his typical assertion that many polls show him beating Clinton.  Not so:


By the way, Trump fans' specious comparisons to the Reagan/Carter polling dynamics of 1980 are even less applicable now than it was weeks ago:


The Wisconsin Republican primary is one week from tomorrow.  Reliable, fresh polling in the state is scant, but the minimal data we do have suggests that Ted Cruz holds a very modest lead.  It's essentially a must-win state for Cruz and the anti-Trump bandwagon, a reality that even John Kasich may be internalizing.  Governor Walker, who remains extremely popular among Badger State Republicans, says he'll make an endorsement this week.  Anyone want to take a stab at solving this mysterious riddle, considering that the guy has made clear how much he loathes Trump?

Scott Walker says he'll issue an endorsement this week, and Kasich is just a spoiler. https://t.co/BpcQZnzuDn