Hillary to AIPAC: Unlike Trump, I'm Not 'Neutral' on Israel 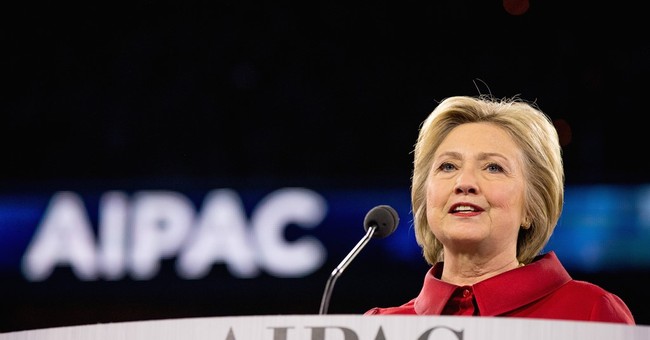 Presumptive Democratic presidential nominee Hillary Clinton took several jabs at Donald Trump in a speech to the American Israel Public Affairs Committee conference on Monday, hitting the Republican frontrunner over his professed 'neutrality' in the Israeli-Palestinian conflict. Like Trump's Republican rivals, Clinton slammed Trump's muddled stance, which she said is rooted in the premise that "everything's negotiable." She drew a sustained ovation by concluding, "Israel's security is non-negotiable:"


Another strong moment came when Hillary unequivocally repudiated the (failing) 'Boycott, Divest, Sanctions' (BDS) movement, which seeks to isolate and punish Israel for its alleged international sins.  This effort is often spearheaded by anti-Israel zealots who dispute the Jewish state's right to exist and make excuses for terrorists who seek Israel's annihilation.  The presidential candidate denounced rising antisemitism in Europe and urged college students resisting BDS on campus to maintain their passion and refuse to be bullied into silence:


A welcome and refreshing rejection of the End of Discussion mob from a leading Democrat -- who, alas, is no stranger to debate-squelching demagoguery herself.  Clinton also ripped Palestinian leadership for fomenting violence against Israeli civilians and called for new sanctions against Iran, as a consequence of the regime's multiple illegal missile tests since the infamous nuclear accord went into effect.  From the transcript of her speech:

Iranian provocations, like the recent ballistic missile tests, are also unacceptable and should be answered firmly and quickly including with more sanctions. Those missiles were stamped with words declaring, and I quote, “Israel should be wiped from the pages of history.” We know they could reach Israel or hit the tens of thousands of American troops stationed in the Middle East. This is a serious danger and it demands a serious response. The United States must also continue to enforce existing sanctions and impose additional sanctions as needed on Iran and the Revolutionary Guard for their sponsorship of terrorism, illegal arms transfers, human rights violations and other illicit behaviors like cyber attacks.


Here, the woman hoping to replace Barack Obama in the Oval Office makes the case that Iran remains an exceedingly hostile threat to US interests and global stability.  The obvious retort to what appears to be her clear-eyed view of an enemy regime is to note that she served as Secretary of State in an administration that has often shown more public deference to Tehran than Tel Aviv, and that struck a terrible nuclear deal that will allow the world's top terrorist patron to gain nuclear weapons within 10-to-15 years -- and that's if they don't cheat, which they always do.  When she touted her early involvement in, and support for, the nuclear deal, the AIPAC audience's response was a bit chilly:

Five people clap for Hillary's applause line about her role in the Iran nuke deal. Oops.


Rightfully so.  The Obama administration's signature "diplomatic breakthrough" pours tens of billions of dollars into the regime's coffers, an outcome that even Obama concedes will likely allow more money to flow to terrorist organizations.  It legitimizes the Iranian regime and its rogue nuclear program, which has been developed in continuous violation of international law.  Its inspection regime is weak and riddled with loopholes.  It does virtually nothing to permanently reverse Iran's nuclear capability, and (again, by Obama's own admission) all but guarantees that Iran will become a threshold nuclear-armed state as soon as the West's restrictions begin to automatically expire, regardless of Iran's conduct.  This is the deal that Hillary Clinton defends.  Despite her strong pro-Israel rhetoric, Clinton's "smart power" record and judgment are ripe for intense criticism -- both broadly and on a granular level.  Does Donald Trump possess the knowledge or capacity to prosecute that case?  Is there any reason to believe he'd be better than Hillary on the Israel issue, aside from his sharply negative (albeit unspecific) assessment of the Iran deal, and his participation in, uh, a parade?  Perhaps a clearer picture will emerge this evening when he addresses the influential gathering -- equipped with rare prepared remarks, and amid planned protests.