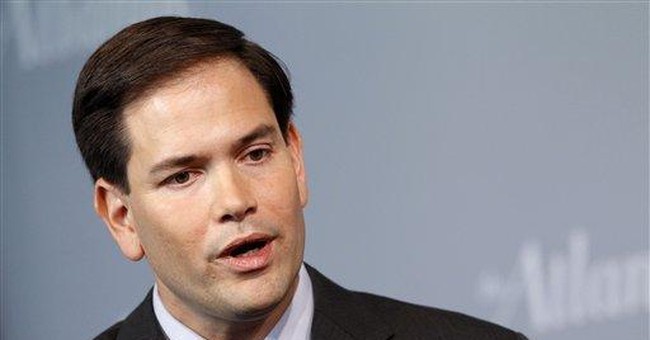 Stop what you're doing, take 15 minutes, and watch the speech Marco Rubio delivered on the Senate floor last evening.  I know Greg posted the raw clip last night, but this needs amplification. I pried myself away from the NCAA tourney to watch it live on C-SPAN, and it was worth every minute of it.  Responding to the Obama administration's extraordinary statements and actions in the aftermath of Benjamin Netanyahu's re-election, Florida's junior Senator offered a stirring tribute to Israel, followed by a meticulous and unsparing condemnation of this president's treatment of our close ally. This is Rubio at his very best -- taking apart Obama at his very worst -- in an articulate, informed, and unscripted address:


Rubio outlined the long history of Obama's hostility toward Israel, decrying the current rancor as a tragic new low in US-Israeli relations.  He upbraided Obama for his breathtaking double standards, noting that the president made prompt congratulatory phone calls to Vladimir Putin, Iran's new president, and the Chinese Premier after their "election" "victories," but hadn't yet found the time to phone the duly re-elected leader of a dear American friend -- the strongest, most pluralistic, most pro-America democracy in the Middle East. When O finally got around to it, the resulting discussion was reportedly…not cordial. Has the president ever conducted a harsher conversation with a foreign leader -- "friend" or foe? Another biting snippet:

Marco Rubio, just now, calling the Administration out for their hypocrisy on which elections they'll "comment" on: pic.twitter.com/nvseeHVCgp


Seriously, watch the entire thing.  And while you're at it, re-watch this highlight reel of Netanyahu's address to Congress. Team Obama was livid over this speech not because of their (very real) personal animus towards Bibi, but because they correctly feared that his clear-eyed assessment of their disastrous deal with Tehran's evil regime would resonate.  Indeed, Netanyahu built a powerful case against this administration's dangerous misadventure:


The Obama administration is showing off its radical, petulant stripes and isolating itself in Washington. I'll leave you with Smart Power's public assessment of the UN's despicable treatment of Israel just a few short weeks ago. Today, the White House is openly flirting with the idea of cutting our Israeli friends loose by refusing to insulate the Jewish state from that corrupt institution's ravenous, insane, anti-Semitic machinations:

In her speech to AIPAC just two weeks ago, Susan Rice said that singling out Israel at the UN is "wrong" and "ugly" pic.twitter.com/otqXqRFYxx


UPDATE - Turning to politics, your thoughts?

Marco Rubio is the most naturally talented politician in the GOP.

@allahpundit @JayCostTWS Maybe. But he’s more than that: he’s the best political communicator in the country.