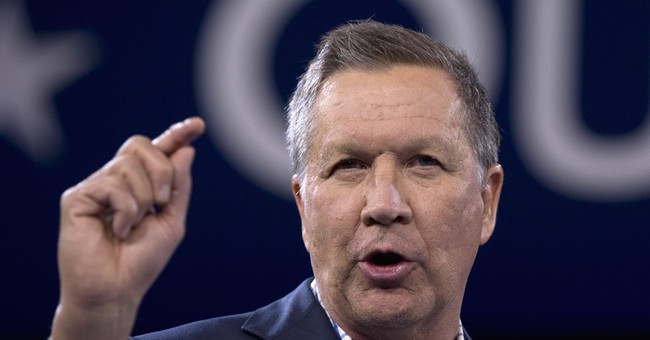 Ohio Governor John Kasich's continued presence in the 2016 campaign is predicated on winning his home state on Tuesday. A streak of polls had shown Kasich trailing frontrunner Donald Trump in Buckeyeland, but a fresh Fox News survey measures a modest lead for Kasich heading into the 'Super Duper Tuesday' contest:


Meanwhile, Kasich has secured an endorsement from one of Ohio's oldest and largest newspapers:

Kasich, 63, has all the ingredients to become president of the United States. His problem is that most Americans are coming late to that realization. He had strong showings in New Hampshire, Virginia, Vermont and Michigan, but he is so far behind in the delegate count that a contested convention likely is the only way he can become the Republican nominee. Luckily for Kasich, this year's Republican National Convention is in Cleveland. Can't script it better than that...Kasich must win Ohio's winner-take-all GOP primary next Tuesday. He must do so to deny Donald Trump the state's 66-delegate prize, which could be enough to ensure Trump the nomination. And he must do so to make himself the logical go-to compromise in July in Cleveland.


He also reeled in this big get -- the hyper-popular head coach of Ohio's flagship sports team:


Meanwhile, after a number of polls showing Donald Trump pulling away in Florida, two new surveys show Marco Rubio pulling to within single digits of the frontrunner in the Sunshine state.  As I discussed yesterday, Tuesday voters who count themselves among the majority of Republicans who oppose Trump's candidacy would be best-served to cast ballots strategically next week:

2 new polls show Rubio w/in single digits in FL. If you support Cruz/Kasich & live in FL, MR is the only 1 who can deny Trump 99 delegates.