The Reckoning: A Cruz Coalescence Conundrum 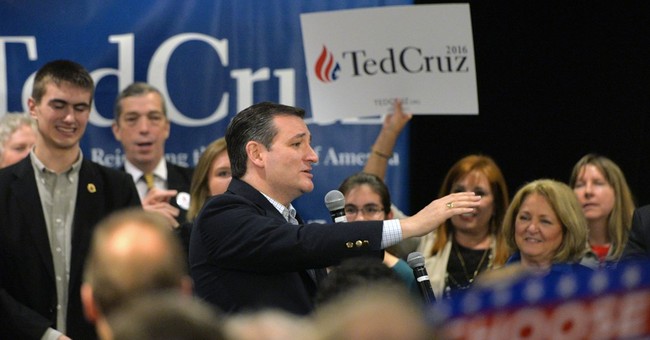 As we stated this morning, it is now obvious that Ted Cruz has emerged as the only conservative alternative to Donald Trump, having defeated the controversial billionaire in Iowa, Texas, Oklahoma, Alaska, Kansas, Maine, and Idaho. The only other Republican to have actually won any primary contests is Marco Rubio -- who captured Minnesota and Puerto Rico amid a slew of strong finishes, but whose momentum appears to have been crushed over the last week. In the wake of another big night for Trump, Cruz is arguing more fervently and convincingly than ever that he is the only contender remaining in the race who can defeat Trump for the nomination. His new endorser, Carly Fiorina, is making the same point.  While the math backs up their contention, the very same data set indicates that Cruz's path to victory remains quite tenuous. Consider three scenarios:

(1) Rubio and Kasich rally to win in Florida and Ohio.  If this (longshot?) scenario plays out, the GOP field will have denied Donald Trump 165 critical winner-take-all delegates and would strike a real blow against his 'prohibitive frontrunner' image. The #NeverTrump movement would gain renewed steam, and the likelihood of a contested convention would improve dramatically. If Trump fails to clinch a majority of delegates, it's entirely conceivable that Cruz could or would emerge as a 'consensus' pick amid Cleveland chaos: He would be seen as acceptable to most conservatives, less reckless and unpredictable than Trump to the establishment, and sufficiently populist as to acknowledge the political currents that have fueled Trump's rise. Considering that Cruz's likeliest, and quite possibly only, path to the nomination runs through the convention, it's been a bit baffling to see the candidate and his allies condemning the idea of a contested convention so forcefully. That rhetoric may score some short-term populist points, but they may be forced to eat their words down the road. Remember, a contested convention only happens if voters make it so.  Right now, approximately 65 percent of GOP primary voters have cast ballots for candidates other than Donald Trump, and his national lead has stagnated despite his victory drumbeat and rising delegate count.

(2) Rubio loses Florida, but Kasich wins Ohio. The Cruz campaign has made a big show of playing in Florida, even though polls show the Texan has virtually no chance of winning the delegate-rich prize. Some had speculated that he's trying to siphon off Trump voters to keep the state competitive for Rubio, but SuperPAC ads attacking Rubio, the Carly announcement in Miami, and comments like this make it clear that Team Cruz has decided to prioritize killing off their Floridian rival:

@tedcruz staffer: "we will concede Florida to @realDonaldTrump in order to get @marcorubio out & move his voters to us." #FloridaPrimary


The idea, it seems, is to hand 99 delegates to Trump on a silver platter in order to winnow the field and charge forward into a one-on-one grudge match with the frontrunner. Two new polls show Cruz (and Rubio) leading Trump head-to-head by substantial margins among Republican voters. Complication: If John Kasich holds serve in Ohio, he will have every reason to stay in the race. He'll have finally won a primary, and a big one at that. He's lay claim to genuine momentum, touting his positive, "adult in the room" approach as a critical presence in the race. He'll swell his delegate contingent, further cementing at least an influential role at a contested convention (which he's been talking up). He'd have the much-discussed "establishment lane" of the primary to himself, with the more conservative Rubio out of the picture.  And he's already shown the capacity to withstand heavy pressure to drop out. Given his no-attacks posture and the deep animosity between the Rubio and Cruz's camps (which may deepen if Cruz is seen as having assisted Trump in sabotaging Rubio), Kasich would likely find himself well-situated to inherit a sizable chunk of Rubio supporters in future contests. The bet that Cruz would reap a dominant majority of Rubio voters with Kasich still in the race feels like a risky one. And if Cruz and Kasich continue to dilute the anti-Trump vote, you-know-who benefits, particularly in winner-take-all states.

(3) Rubio and Kasich both lose their home states.  Based on recent polling, this scenario now feels quite plausible, if not likely.  The good news for Cruz here is that he would finally get the two-man race he's coveted for many weeks.  The bad news is that Trump would have just reaped a massive delegate windfall, having won two of the most important swing states in the country.  The frontrunner would also probably have secured pledged delegates in Missouri, Illinois and North Carolina, making him the clear winner of 'Super Duper Tuesday.'  Not only would his delegate scenario look a lot rosier, the resulting media coverage would likely take a decisive turn toward casting him as the presumptive Republican nominee, especially with a string of Trump-friendly states (several featuring some form of proportional allocation) lying ahead.  Between a bandwagon effect and Cruz's persistent struggles to perform among certain voting blocs, the notion that he'd suddenly start stomping Trump everywhere in a two-man race, again, feels...risky.  Not necessarily inconceivable, but hardly a sure thing.  If anything, he may be able to battle Trump into Cleveland, having already decried the idea of a contested convention.

In short, Ted Cruz now unambiguously occupies the best spot, by far, of the non-Trump field.  But his ability to secure the Republican nomination could very well lie in a contested convention, in which Trump enters with a relatively modest plurality of delegates.  This is most likely to occur under the first scenario described above, which Cruz's campaign and allies appear to be toiling to foreclose.  And an alternate framework wherein Cruz beats Trump outright for a majority of nominating delegates looks like a real stretch at this juncture in the race, as it relies on a lot of things breaking the right way for the Texan.  Time is running short.  Trump isn't unstoppable yet, but it's getting close.  With the viability of one Hail Mary option long since expired, it's time to float another.  Tick tock:

Parting thought: If this is true, would Rubio immediately endorse Cruz?  And given the many early votes Rubio has already banked in Florida, wouldn't it make much more strategic sense to go with my suggestion above?

Top @marcorubio donors say barring a positive poll, the Senator will suspend his campaign prior to the Fla primary.https://t.co/IRJSkevDD0


And for what it's worth:

How I'd advise @MarcoRubio to team up with @TedCruz & announce the alliance to tomorrow's massive debate audience: pic.twitter.com/6kntW9oKyW