Hillary: On Second Thought, I Do Support Some Boots on the Ground in Syria 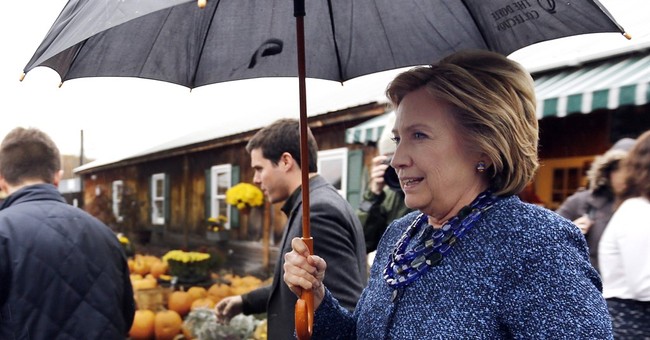 Senator Hillary Clinton voted for the wars in Afghanistan and Iraq. Secretary of State Hillary Clinton was a forceful advocate for the Libya intervention, which culminated in a disastrous policy failure. A few weeks ago, presidential candidate Hillary Clinton staked out a more hawkish Syria policy than the Obama White House, calling for a no-fly zone over that country -- while emphasizing that she was opposed to "boots on the ground" (via America Rising):


"I agree completely -- we don't want American troops on the ground in Syria. I never said that."


She's also voiced opposition to ground troops on the campaign trail, telling voters that the conditions on the ground in Iraq and Syria don't justify that sort of action, while reiterating the administration's meaningless, quasi-abandoned 'Assad must go' stance). But now that President Obama has reversed himself by ordering additional American special forces into Syria -- and Iraq, by the way -- serial interventionist Hillary Clinton once again finds herself in favor of intervention:

Hillary Rodham Clinton supports the decision by President Barack Obama to deploy a small number of special operations forces to northern Syria to work with local ground forces in the fight against Islamic State militants. Campaign spokesman Nick Merrill said in a statement that Clinton "sees merit in the targeted use of special operations personnel." He added that Clinton also strongly "supports ongoing diplomatic efforts to end the conflict." But, he said, she opposes the U.S. entering a larger ground war in the Middle East to combat the rise of Islamic militants. As secretary of State, Clinton advocated for a more aggressive U.S. role in the Syrian conflict. Earlier this month, she called for a no-fly zone over the area, a move the administration opposes. Clinton's main challenger, Vermont Sen. Bernie Sanders, said through a spokesman that he has "concern about the United States being drawn into the quagmire of the Syrian civil war which could lead to perpetual warfare in that region."


She's pushed for a more aggressive US role, but on whose behalf?  The administration's formal policy is one of regime change, as Assad is a murderous, Moscow-backed puppet of Iran.  But his departure would likely be a boon to hardcore Islamist groups like ISIS and al-Nusra, so that plan is on hold.  Meanwhile, half-baked American efforts at supporting and arming moderate anti-Assad Syrian rebels have crashed and burned.  "Red lines" have come and gone.  Eleventh-hour "diplomatic solutions" have crumbled.  The administration has moved from threatening to bomb Assad -- with or without Congress' approval -- to intervening with combat troops against Assad's "jayvee" enemies.  The Obama/Clinton intervention in Libya destabilized the country and allowed Islamist fanatics to flourish.  The Obama/Clinton political withdrawal from Iraq destabilized the country and allowed Islamist fanatics to flourish.  American foreign policy is adrift, and the world knows it.  Hillary Clinton owns every piece of this mess, which is why she has no choice but to engage in these Syria contortions; she's following the lead of a Commander-in-Chief whose guiding light often seems to be domestic political calculation, which is why he chose to make blanket pronouncements like this:

@NoahCRothman @redsteeze Obama said no boots on the ground in Syria. pic.twitter.com/IdM9BZqC0m


Over to you, Jim Geraghty.