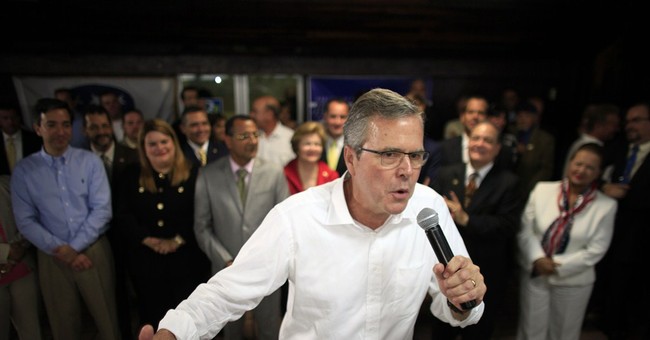 A pair of polls out of the swing state of New Hampshire show a wide open GOP race -- perhaps as it should be at this nascent stage of the cycle -- and warning signs for Hillary Clinton's Democratic Death Star. On the Republican side of things, a new WMUR/UNH survey indicates the GOP electorate isn't especially engaged yet, with no clear favorite emerging from the pack:

New Hampshire primary voters usually decide who they will vote for in the last weeks, or days of the campaign and it is no surprise that very few likely Republican primary voters have made up their minds about who they will support in 2016. Currently, only 5% of likely Republican Primary voters say they have definitely decided who they will support, 17% are leaning toward a candidate, and 78% are still trying to decide...There continues to be no frontrunner in the Republican race. Currently, 15% of likely Republican primary voters support Bush, followed closely by Rubio (12%), Walker (11%), Paul (10%), Cruz (6%), Trump (5%), Perry (4%), Carson (4%), Fiorina (4%), Christie (3%), Huckabee (3%), Jindal (2%), Pataki (2%), Santorum (2%), Kasich (1%), and Graham (1%). All other potential candidates receive less than 1% support, and 14% say they are undecided.


Bush/Rubio/Walker/Paul at the top of the pack isn't a surprise, though the fact that the clownish Donald Trump leads several serious candidates demonstrates name recognition is a massive asset when most voters are ambivalent and tuned out.  These numbers are slightly more interesting:


Huge upsides for Rubio and Walker.  The Florida Senator garners a (+44) favorability rating among New Hampshire Republicans, easily the strongest in the field on that measure.  Walker is within shouting distance at (+36), with nearly a quarter of respondents not knowing enough to say one way or the other.  That stat offers the Wisconsin governor a golden opportunity to earn support from undecided and casual voters, of which there are many; it also suggests that as the least known of the top-tier candidates, Walker may be uniquely susceptible to attacks from opponents seeking to define him.  Also, a note on Chris Christie: With all the caveats about how early everything is very much in place, his not-yet-announced campaign is truly in dire straits.  New Hampshire is essentially a must-have in any plausible path to the nomination for New Jersey's governor -- and he's pulling three percent in this poll.  This is a state in which he was widely considered to be a (very) early favorite in the wake of his dominant re-election.  That reality explains his aggressive moves on entitlement reform, as he tries to pivot away from the pall of 'Bridgegate.'  Speaking of which, federal prosecutors turned up absolutely zero evidence that Christie told anything other than the truth from the moment that scandal broke.  That investigation is now closed, as is the probe into the Mayor of Hoboken's baseless accusations of bullying and corruption.  Nevertheless, Christie finds himself in a deep hole, with his support in the Granite State slipping six percentage points since the last poll.  Meanwhile, in ludicrously premature (but fun!) New Hampshire general election polling from Dartmouth College:


Loads of uncommitted voters, obviously, and we're a year-and-a-half away from decision day -- plus, Team Clinton hasn't even begun to unleash its money machine.  But how much of the Clinton cake is baked?  Everyone knows her, and most Americans don't trust her.  How could they, when she's made it abundantly clear that she'll say absolutely anything.  This week, she proposed an even broader unilateral amnesty than Obama's unpopular and unlawful actions.  Over to you, Senator Clinton: