Video: Rubio's All In 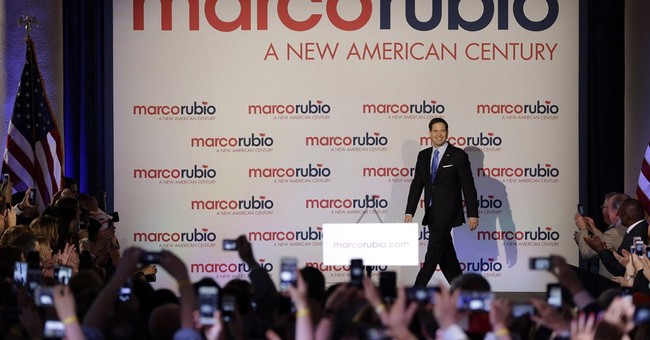 In case you missed it last evening, Florida Senator Marco Rubio of Florida officially entered the 2016 Republican presidential race -- he is the third GOP aspirant to formally do so, joining fellow first-term Senators Ted Cruz and Rand Paul among the ranks of declared candidates. Here are his full remarks, followed by some commentary:


As Dan noted last night, Rubio directly criticized the Obama administration on foreign policy, and dismissed Hillary Clinton as a relic of yesterday's politics.  His campaign theme is the forward-looking mission of securing a 'new American century,' rooted in an abiding appreciation for the genius of our founding, and deep love of what America has meant to her people and to the world.  Sounding very much like 2008's Barack Obama, Rubio positioned himself as representing a needed break from the past, and described 2016's dynamic as a change election.  Sounding very much unlike Barack Obama, Rubio attacked expansionist government and demanded the United States reassert its imperative role as the leader of the free world.  His speech was optimistic and future-oriented, previewing exactly how he'd frame a head-to-head contest with the presumptive Democratic nominee. I suspect he senses a real opportunity at the prospect of Hillary Clinton effectively running as an older continuation of the Obama presidency. Rubio enters the fray with single-digit support, but data guru Nate Silver makes an interesting observation:

Rubio's favorability ratings as good as Walker, Bush's among GOPers. But he's often a 2nd choice. Will that change? http://t.co/UVYGK8r5IL


Rubio is in pretty good shape in terms of favorability, but he hasn't galvanized much support as a top-tier candidate -- at least not yet. He's an acceptable fallback for quite a lot of Republicans, but he's not at the top of many voters' list. Not a terrible spot to occupy at this early stage, sure, but one from which he'll need to emerge to attract dollars and attention. Silver's question is a good one. Here's another, via Allahpundit -- is Rubio actually the safest option for national Republicans?

The more I think about it, the more I think his biggest asset is that he’s the safest pick among the top tier of candidate — by far. No one knows if Jeb can shed his “Bush baggage.” No one knows if Walker can attain the sort of fluency Rubio already has on foreign policy, or if his ham-handed early pandering on immigration will lead to other opportunistic policy reversals. No one knows if Rand Paul can prevent Democrats from painting him as a crank, and no one knows how many Republican hawks will stay home in protest if he’s the nominee. No one knows if Ted Cruz can appeal to swing voters in a national election, even if he figures out a path to the GOP nomination. Rubio, though, seems like a low-risk choice on almost every front. He banked some centrist cred with his immigration bill and his new tax-reform plan; he’s got his own trailblazing racial narrative; he can (probably) deliver a major swing state; he’ll be excellent on the stump, and far, far, far better than Hillary Clinton. There won’t be any major gaffes a la Romney and the 47 percent, there won’t be any weird stunts like McCain suspending his campaign over the financial crisis. He’ll be solid. Even his most obvious liability, his youth, could turn out to be an asset against Clinton, a candidate nearly 25 years older...The fear with electing a young president is that he doesn’t know the issues; Rubio palpably does and will have many chances to prove it. Besides, how can Hillary attack him for his age? Rubio will be 45 on election day 2016. Bill Clinton’s age when he was elected to his first term: 46.

Why does generational contrast matter? 5 of the last six prez elections won by younger nominee. Bush/Gore the exception.


As AP says, Rubio's fluency on issues and strength as a compelling, extemporaneous speaker will serve him well over the day-in, day-out grind of a presidential campaign. Yes, he tends to lean heavily on moving anecdotes about his family in speeches, but beneath the inspirational rhetoric is a deep pool of knowledge, much of it quite detailed. And he's able to convey that knowledge and express conservative perspectives as fluidly and impressively as anyone on the contemporary scene. Parting thoughts: Will his undeniable talents land him at least somewhere on the 2016 GOP ticket? Remember, regardless of how things play out, he'll be out of a job as a US Senator come 2017. And even though his favorables are in good shape among core Republican voters at the moment, can those numbers withstand a barrage of attack ads over the 'Gang of Eight' immigration bill he co-sponsored? Also consider this good point from Jim Pethokoukis.  Almost every politician from both parties waxes poetic on American exceptionalism, and praises the American dream.  But with Rubio, that standard fare feels like something more than warmed-over sloganeering:


I'll leave you with the words of a man who sounds like he's Ready For Hillary: