Freakout: The Media's Breathtaking Double Standards on Patriotism and 'Civility' 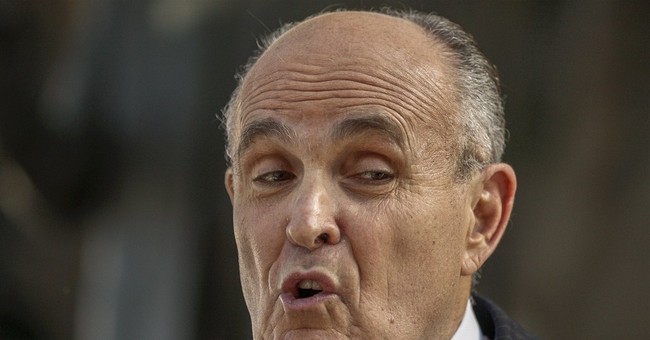 Democrats and Republicans play by different rules because the media enforces those rules, and members of the national press tend to be liberal Democrats. During the Bush years, we were often reminded, dissent was the "highest form of patriotism." Over the course Obama's tenure, dissent became dangerous, disrespectful, un-American and quite possibly racist. When a conservative figure says something that seems to impugn or question a prominent liberal's character or love of country, "civility" SWAT teams are dispatched to knock down some proverbial doors. Such transgressions mustn't stand. But when the dynamic is reversed, the civility police are curiously off duty. Which brings us to Rudygate. For days, the media elite have been hyperventilating into paper bags over caustic comments from a long-retired Republican mayor, who suggested that President Obama doesn't love America. (For the record, Giuliani's assessment was demagogic and unproductive). By virtue of another one-sided media rule -- which stipulates that top Republicans must always answer for every single Republican-involved "outrage" du jour -- Rudygate has magically morphed into Walkergate. The Washington Post decided to use precious time in an exclusive interview with Gov. Scott Walker to interrogate him about Giuliani's remarks, following up with the non sequitur question of whether he thinks Obama is a Christian. Here is the part of Walker's response over which the Outrage Circus is sputtering and fulminating:

Wisconsin Gov. Scott K. Walker, a prospective Republican presidential contender, said Saturday he does not know whether President Obama is a Christian. “I don’t know,” Walker said in an interview at the JW Marriott hotel in Washington, where he was attending the winter meeting of the National Governors Association. Told that Obama has frequently spoken publicly about his Christian faith, Walker maintained that he was not aware of the president’s religion. “I’ve actually never talked about it or I haven’t read about that,” Walker said, his voice calm and firm. “I’ve never asked him that,” he added. “You’ve asked me to make statements about people that I haven’t had a conversation with about that. How [could] I say if I know either of you are a Christian?”


He doesn't know? For shame! Anything short of an immediate profession of absolute assurance regarding the contents of Barack Obama's heart and mind is a scandal. Never mind that Hillary Clinton cagily said in 2008 that she took Obama "at his word" that he's not a Muslim; that doesn't matter right now. Also irrelevant? This portion of Walker's answer:

“To me, this is a classic example of why people hate Washington and, increasingly, they dislike the press,” he said. “The things they care about don’t even remotely come close to what you’re asking about.” Walker said he did not believe that most Americans care about such matters.“People in the media will [judge], not everyday people,” he said. “I would defy you to come to Wisconsin. You could ask 100 people, and not one of them would say that this is a significant issue.” After the interview was completed, Walker spokeswoman Jocelyn Webster telephoned The Washington Post to say the governor was trying to make a point of principle by not answering such kinds of questions, not trying to cast doubt on Obama’s faith.

To be fair to Scott Walker, he's been so busy governing, he hasn't had time to personally authenticate the President's birth certificate


Dana Milbank, whose journalistic integrity was on full display here:

What Rudy Giuliani did this week was stupid. What Scott Walker did ought to disqualify him as a serious presidential contender…This is what’s alarming about the Giuliani affair. There will always be people on the fringe who say outrageous things (and Giuliani, once a respected public servant, has sadly joined the nutters as he questioned the president’s patriotism even while claiming he was doing no such thing). But to have a civilized debate, it’s necessary for public officials to disown such beyond-the-pale rhetoric. And Walker failed that fundamental test of leadership.

Serious question for @Reince: Post-autopsy, are you OK with GOP rebranded as the party that decides who loves their country? Say no to Rudy


As Conn reported on Friday, the White House press corps was also in high dudgeon, obsessing on Rudy's assessment during that day's press briefing. By Conn's count, they asked 12 questions about Rudygate, and just one about the presumptive Democratic 2016 nominee's just-revealed conflict of interest/foreign money problem.  The Free Beacon did its own, similar tabulation. The contretemps were a hot topic on the Sunday morning chat shows, too. This "news judgment" is par for the course because the rules dictate that some stories are more important and outrageous than others. And inconvenient facts are elided when necessary. Fouriner, having demanded a full-throated RNC denunciation of Giuliani, explained that Obama and the America-loving Democrats are above such ugly cynicism:

Absolutely @BarackObama loves his country. Loves it enough not to cynically question the patriotism of his rivals. http://t.co/c2uMDPS1iL


Except for that time when he, you know, called the sitting president's debt accrual (!) "unpatriotic:"


The media cannot get over Rudy's acerbic commentary and Walker's "insufficient" reaction to it, but they couldn't have cared less about O's patriotism smear. Many of them probably aren't even aware that the latter statement occurred because it didn't really register on the MSM radar at the time. Obama was talking about Bush, after all, and the rules permit that.  Also allowed under this Civility Code of Conduct: (1) White House spokespeople calling Republicans suicide bombers, kidnappers and arsonists over budget tactics. (2) President Obama flatly stating that the GOP wants dirty air and water, and opposes people having healthcare. (3) House Democratic leadership branding Obamacare critics "un-American." (4) Nancy Pelosi calling House Republicans "unpatriotic." (5) The DNC chairwoman asserting that Republicans want to "literally" drag America back to the Jim Crow era. (6) Harry Reid sliming private citizens with whom he disagrees as "un-American." (7) House Democrats comparing conservatives and Republicans to "demons," "fascists," generic Nazis (on several occasions), political terrorists -- and, of course, Hitler.  (8) Vice President Biden allegedly referring to the Tea Party's "terrorist" tactics.  (9) Former Vice President Al Gore bellowing that the man who defeated him "betrayed" America.  Oh, and the same sort of journalists who are reaching for the smelling salts over Rudy's statements today were merrily writing about House Republicans' terroristic conduct during the debt ceiling debate of 2011.  Deranged, unhinged, demagogic, patriotism- and motives-questioning bile will not be tolerated.  Unless its targets deserve it, of course, in which case nastiness will be dismissed, downplayed and ignored (if not encouraged).  I'll leave you with a word on dissent from She Who Must Not Be Questioned:


To be clear, challenging opponents' patriotism is almost always unwarranted, wrong, and counter-productive.  I'm not racing to Rudy's defense here (though the Walker attacks are preposterous). I am, however, determined to call out the media's infuriating "civility" double standards and selective outrage, which lay bare their fundamental, and apparently incurable, biases.  Republicans are the bad guys, so they deserve tougher scrutiny.  And they ought to be grilled about, and held accountable for, all of their side's real or imagined sins -- whereas Democratic scandals and controversies are isolated incidents without any "emblematic" value.  Because that's how the rules work.