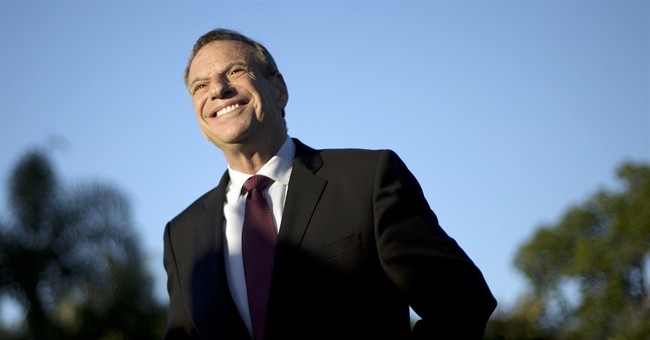 Mary Katharine Ham has been doing phenomenal work covering the egregious case of Bob Filner, San Diego's lecherous mayor.  Filner, a Democrat and former Congressman, has been harassing, violating and degrading female subordinates for years.  One of his accusers has retained celebrity lawyer Gloria Allred and is pursuing a lawsuit. It sounds like she might have a case:

Mayor Bob Filner’s former communications director filed a sexual harassment lawsuit on Monday against the leader of the nation’s eighth-largest city, alleging he asked her to work without panties, demanded kisses and dragged her around in a headlock while whispering sexual advances. Irene McCormack Jackson offered lurid details in the lawsuit that made her the first person to publicly identify herself as a target of the mayor’s advances since some of Filner’s most prominent former supporters said nearly two weeks ago that he sexually harassed women and demanded that he resign. “I saw him place his hands where they did not belong on numerous women,” McCormack said alongside her attorney, Gloria Allred, one of the most widely known civil rights attorneys in the country.

McCormack is hardly the only woman to report such appalling treatment.  More lurid details have emerged from at least six women, dating back years (Filner served in Congress from 1993 to 2012):


- A campaign volunteer who said Filner kissed her — “jamming his tongue down her throat” — on a public sidewalk and later groped her under her bra when she drove him back to his office.

- A constituent who attended one of Filner’s monthly meet-and-greet events at City Hall. She said the mayor took her to an enclosed area, dismissed a staff member, asked her out on a date and then grabbed and kissed her. She left immediately.

- A mayoral staffer, who spent six months working for Filner, complained that “he grabbed her ass and touched her chest.”

Filner's ex-fiancee says she broke things off when his "standard decorum seemed to disappear. Bob recently began texting other women sexually explicit messages and setting up dates while in my presence and within my line of vision."  Other women recall a humiliating spectacle known as "the Filner dance," wherein the mayor would corner a female colleague in his office, effectively challenging her to either escape or submit to his advances.  Paradoxically, the San Diego Democrat has both proclaimed his innocence and apologized for his "inappropriate" behavior.  Buzzfeed notices that Beltway Democrats -- including high-ranking women -- aren't exactly lining up to denounce their erstwhile colleague:

If you ask five Democratic women about San Diego Mayor Bob Filner, accused of multiple instances of sexual harassment, you’ll get five different answers. It’s a stark contrast with how it sounds when an elected Republican says or does something offensive — then Democratic women speak as one.

When a Republican male says or does something stupid, the Girl Power Liberal Outrage Machine kicks into high gear.  But if the war-wager is a fellow liberal, things get rather nuanced.  Asked whether Filner should resign, House Minority Leader Nancy Pelosi all but said "what happens in San Diego stays in San Diego."  Watch this embarrassing whitewash, and try to imagine if the man in question were a Republican:

Remember when Democrats scrupulously avoided exploiting Todd Akin's idiotic "rape" comments because it was really just a local Missouri matter?  Neither do I.  They parlayed that story into a national narrative -- essentially forcing every Republican running for office to repudiate Akin's remarks, and then still pounding away at them afterwards.  But Akin's words, while unscientific and indefensible, were still words.  Filner, by contrast, has been an aggressive misogynist and serial groper for years.  These are actions, not words.  But according to an EMILY's List spokeswoman, Republican gaffes matter more because of the party's larger agenda, or something.  Translation: So long as the Bob Filner's of the world support abortion-on-demand, "women's rights" groups will look the other way if they want to get their jollies at the expense of their female co-workers' dignity.  A little grabby molestation's fine if he's 'down with the cause,' ladies.  Deal with it.  As ever, abortion is more important to the Left's conception of the war on women than actual women.  Finally, guess where Filner is scheduled to deliver a keynote address next month?  How -- how -- has he not been disinvited?