END OF DISCUSSION: Introducing Our Book Exposing the Left's War on Free Debate

Mary Katharine Ham and I are thrilled to announce our forthcoming book, End of Discussion: How the Left's Outrage Industry Shuts Down Debate, Manipulates Voters, and Makes America Less Free (and Fun!) -- due out in June, and currently available for pre-order. The book addresses how the Left in particular -- but not exclusively -- increasingly seeks to "win" political and cultural debates by preventing those debates from actually happening. This discussion-squelching phenomenon is toxic, and it hurts the country. A quick preview: 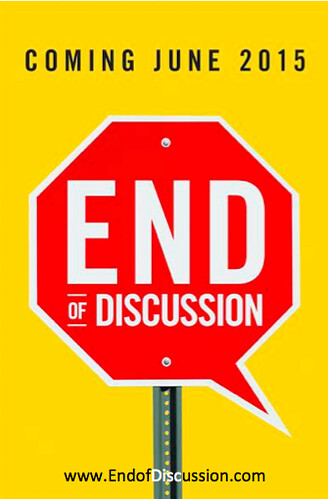 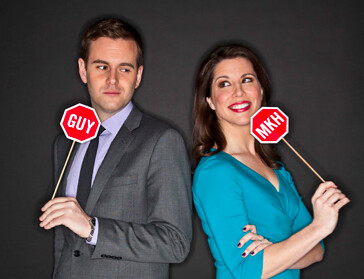 And now, a few kind words from our publisher, Crown Forum (a division of Random House):

Fox News contributors and writers Mary Katharine Ham and Guy Benson rank among the most recognizable and influential young conservatives in American media today...Their first book, END OF DISCUSSION explores the ripple effect of the outrage industry—the media frenzy orchestrated by the Left that is designed to shut down debate—and offers insightful advice to conservatives and freedom-loving Americans on how they should (and should not) fight back against this strategic effort that makes America less free, less feisty, and less fun.  With fresh reporting and occasionally tongue-in-cheek analysis, END OF DISCUSSION takes a critical look at the dysfunction of the National conversation, whereby opposing viewpoints on hot-button issues like gay marriage, federal government policies, and women’s issues are labeled racist, sexist, and evil...The unavoidable by-product [of this campaign of silencing and moral bullying] is a hypersensitive citizenry—a country where reasoned, open debate is stymied, creating a culture in which good people are reluctant to engage in the discussion for fear that they’ll be negatively labeled.


That bolded portion really speaks to the core of our thesis. The insidious trend we identify is poisoning many aspects of American life, most especially our politics. In a piece published this morning, Buzzfeed's Katherine Miller draws on End of Discussion's exclusive interview with Gov. Scott Walker to analyze his media strategy:

During the contentious days of the union protests in Wisconsin, Gov. Scott Walker figured out a secret way to get uninterrupted press time. Walker outlines the strategy — and how he dealt with the onslaught of protests during the contentious period — in a new book, End of Discussion: How the Left’s Outrage Industry Shuts Down Debate, Manipulates Voters, and Makes America Less Free (and Fun!), by Fox News contributors and long-time conservative writers, Guy Benson and Mary Katharine Ham. “At the height of the [anti-budget] union protests, when we were approaching 100,000 protesters at and around the Capitol, I finally got wise,” Walker tells Ham and Benson in an interview for the book. “I started holding press conferences at 5:00 because I knew that if I kept it concise, local television and some national outlets would cover it live. So I had an unfiltered way to talk to the state for about 10 minutes.”


We argue in the book that more conservatives ought to heed and emulate Walker's example in beating back and defeating what we refer to as the Left's 'Outrage Circus,' which relentlessly (and unsuccessfully) assailed him throughout his entire first term. The governor currently finds himself at the center of a moronic, manufactured "controversy," underscoring the dispiriting reality that any Republican seeking high office must be prepared for the hypocritical, contrived, and demagogic nonsense the Left -- and their abettors in the media -- will erect in their paths. I'll leave you with a short, lighthearted promotional video for End of Discussion:


Our aim was to tackle an important issue with serious arguments, but without being too self-serious.  An outraged book about outrage, we decided,  probably wouldn't be especially fun to read (or write, for that matter).  We also set out to compose an enjoyable, intellectually honest book that would naturally appeal to our fellow conservatives, but that would also avoid needlessly alienating those moderates and liberals who share our commitment to genuine debate, open-mindedness and tolerance.  We need them in this fight.  End of Discussion is the culmination of that process.  Click through for more information on our project, and please consider pre-ordering a copy. Or six.