Thumbs Down: Media Unimpressed With WH No-Show at Paris Rally 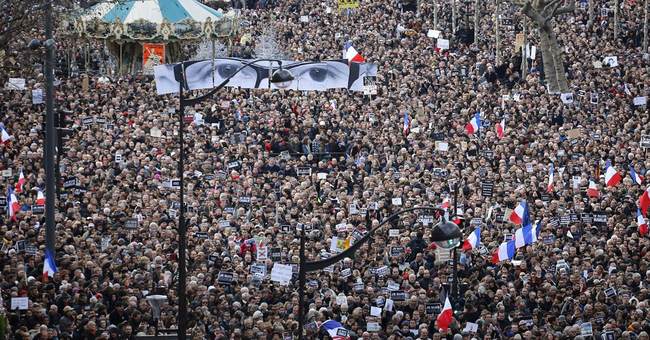 A Christine mentioned last night (and I touched on earlier), President Obama chose not to join approximately  40 world leaders at yesterday's record-setting demonstration in Paris.  In fact, no high-ranking American official represented the United States, as Attorney General Eric Holder skipped the main event after attending a closed door security meeting in the French capital.  He had "urgent meetings" to attend to, on a Sunday, according to the White House.  Ah, but the administration did "send" someone, a spokesman insists:

sr. admin official on the “who from US is in Paris?” question pic.twitter.com/of418Ari25


A largely unknown woman, who lives in Paris, and who earned her position by raising millions for Barack Obama's political career, was there.  So there's that. Obama administration brass also snubbed the rally in Washington, DC, organized by the French embassy.  The president spent the day at home, with nothing on his public schedule.  I'm open to arguments that Obama himself didn't need to attend the Paris gathering in person -- although the 'security logistics' excuse seems a stretch, given Israeli Prime Minister Benjamin Netanyahu and British PM David Cameron's decision to show up.  (As an aside, French President Francois Hollande reportedly asked Netanyahu not to participate, which is par for the course in France, sadly).  But there is no satisfactory reason that explains the embarrassing reality that zero major American dignitaries represented the United States of America at a worldwide pro-free speech, anti-terror rally.  Aren't we supposed to be the "leaders of the free world"?  At the very least, as one commentator put it, didn't God "invent Vice Presidents" for precisely this sort of symbolic event?  Alas, the Obama administration, which sent a three-person delegation to the funeral of Michael Brown (which didn't bother me), couldn't be bothered to send anyone of significance to carry America's banner on this important day.  And this from a group for whom symbolism and international feel-goodery is the coin of their realm.  The Paris demonstration was directly in their wheelhouse -- and its symbolism was actually meaningful, for once -- and they whiffed.  The media reviews are in, and they're ugly:

When this is the front of CNN's website, it is another Foley+Golf moment for President Obama. pic.twitter.com/TDNEpJclVd Noah Rothman has a more complete rundown, including slams from lefty commentators and straight journalists alike:

The United States, which considers itself to be the most important nation in the world, was not represented in this march -- arguably one of the most important public demonstrations in Europe in the last generation -- except by U.S. Ambassador Jane Hartley, who may have been a few rows back. I didn't see her. Even Russia sent Foreign Minister Sergey Lavrov. I say this as an American -- not as a journalist, not as a representative of CNN -- but as an American: I was ashamed.

Tapper pronounced himself ashamed, while Ron Fournier allows that it was a "mistake."  Lanny Davis calls it "poor judgment."  Is seems like by shunning the unity march, the White House has engendered another sort of unity altogether.