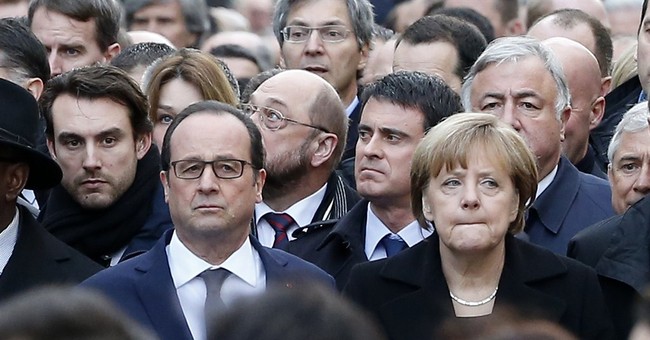 Today, a large "Unity Rally" occurred in Paris to condemn the atrocities that occurred in the city earlier this week. The rally was attended by thousands, including French President Francois Hollande, German Chancellor Angela Merkel, British Prime Minister David Cameron, Israeli Prime Minister Benjamin Netanyahu and Palestinian Authority President Mahmoud Abbas. Notably absent? Any major official from the United States, including Attorney General Eric Holder, who was in Paris for a terrorism summit.

From the New York Daily News:

Holder, 63, joined with Hollande in condemning the recent Paris attacks in the strongest possible terms and said the U.S. will hold another terrorism summit in D.C. in February.

But his support apparently stopped there — because he wasn’t seen at the emotional “Je Suis Charlie” rally afterward that attracted 1.3 million. Across France, nearly 4 million people turned out in similar demonstrations.

As chanting spectators filled the Place de la Republique, the only U.S. dignitary present was the U.S. Ambassador to France Jane Hartley.

Both the president and vice president reportedly had open schedules on Sunday.

While I know it isn't the responsibility of the United States to babysit the entire world, it is quite strange that there was effectively no U.S. presence at the largest rally in Parisian history. The United States has been the victim of attacks by Islamic extremists--our presence would have been entirely appropriate at the rally.