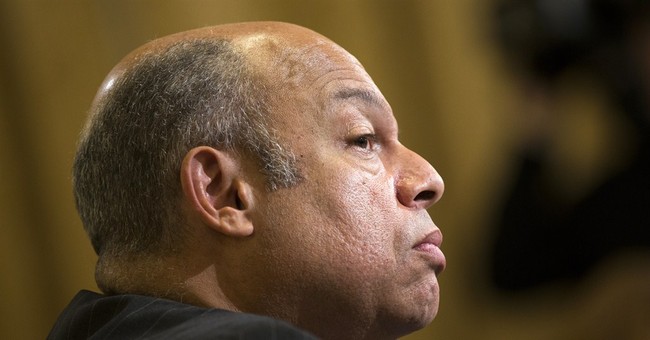 No they're not. Not in the least.  But that's the best Sec. Jeh Johnson could muster on the Hill yesterday.  Need we review the utterly conclusive video and transcript evidence that demonstrates exactly how unambiguous and authoritative Obama's previous statements on this matter were?  Yes?  Fine, please refresh your memory with this short highlight reel.  "Context" galore:


"With respect to the notion that I could just suspend deportations through executive order, that's just not the case."


And let's not forget this gem from 2012, reported by the Associated Press:

In a 2012 interview with Telemundo, Obama defended his decision to defer deportations for children but said he couldn’t go any bigger. “If we start broadening that, then essentially I would be ignoring the law in a way that I think would be very difficult to defend legally. So that’s not an option,” he said then.


Confronted with the president's repeated on-the-record remarks about this explicit scenario -- about which John Boehner's office dug up 22 separate relevant quotes -- Obama's cornered Secretary of Homeland Security was left with little choice to weakly play the "context" game.  The best part of this clip is when Johnson blithely springs Rep. Jason Chaffetz's trap about whether the president just "changed the law" through his unilateral action.  Of course not, the witness responds, hewing admirably to approved talking points. Then Chaffetz rolls the tape.   Nailed to the wall, Johnson reverts back to the pitiful "context" deflection. Painful:


Chaffetz gamely reads more of the verbatim transcript, in an effort to furnish Johnson with the elusive context he was pretending to lack. No dice. Facts aren't important here. Allahpundit makes a really sharp catch on Jeh Johnson's unique understanding of Barack Obama's contempt for the law:

Johnson knows better than almost anyone else in Washington just how disdainful of the law Obama is. Who was the Pentagon lawyer who warned O three years ago that the White House was violating the War Powers Act by engaging in “hostilities” in Libya without congressional approval? Why, Jeh Johnson, of course. But rather than resign in protest, he kept his mouth shut — and got a cabinet position at DHS as thanks. According to this NYT report from a few days ago, Johnson’s first proposal on executive amnesty back in May was far more modest than Obama wanted, probably because Johnson knew just how legally dubious a massive amnesty would be. Too bad, Obama told him; go back to the drawing board and find me some legal fig leaf I can use to legalize millions. So Johnson did it, and now he’s playing the stooge in front of Congress for his boss.


Yep, he's talking about this 2011 episode, in which Sec. Johnson played a starring role.  I'll leave you with another professional stooge, insisting that Obama's "change the law" remark was just an instance of the president speaking, "colloquially," or something:


And that wasn't even Earnest's most cringe-worthy answer of the briefing: