Could Republicans Pull an Upset in North Carolina or New Hampshire? 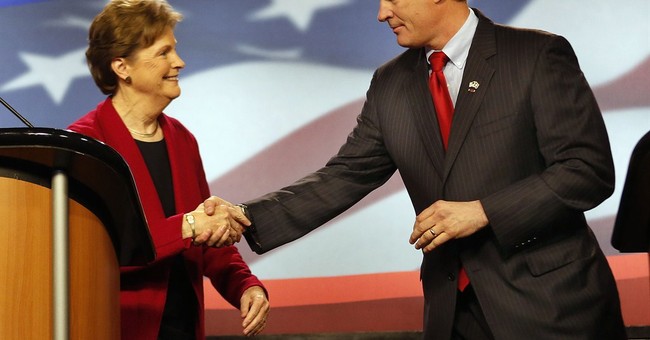 …Or both? Two states left unmentioned in my post this morning were North Carolina and New Hampshire. Each is home to a contested Senate race featuring a female Democratic incumbent, and a Republican challenger who has steadily narrowed the gap in recent weeks. Matt and Dan have covered these contests extensively, so you're already aware that neither GOP nominee has recently led in the RCP or Townhall poll tracker averages.  Both are still (rightly) considered underdogs.  But both have closed strong and made their races nail-biters.  In the Tar Heel State, Kay Hagan's lead is less than two percentage points, as she remains stuck at 45 percent, which is a perilous spot for an incumbent.  But lefty groups' nonstop bombardment of Thom Tillis has denied him the opportunity to overtake Hagan, who's also counting on racially-charged attacks, a superior ground game, and a corrupt state media to pull her across the finish line.  On the latter point, this is an extraordinary report from NRO:

Republicans accused the Charlotte Observer of engaging in a “conspiracy of silence” after it pulled its story about a state government memo calling for “legal review” of stimulus grants given to the family of Senator Kay Hagan (D., N.C.)...As National Review Online reported Saturday, a memo from the North Carolina Department of Environment and Natural Resources recommends that state officials conduct “further legal review” of a grant given to a company co-owned by Senator Hagan’s husband. In particular, his company’s decision to hire a company owned by their son appears to violate prohibitions against self-dealing that were included in the grant agreement, according to the memo. The Charlotte Observer published a story on the memo Saturday evening, but then took the story offline.

In the wee hrs of the night, I discovered the Observer pulled this story. Also now missing from WBTV. #ncsen pic.twitter.com/Q0d9gmv6iM


The media has been obstinately ignoring this story for weeks, just as they sat on the truth about another controversy while Hagan's campaign lied about it.  When the truth was finally dragged out of Hagan (that she had, in fact, skipped a classified briefing on ISIS to attend a Manhattan fundraiser for herself), a major state newspaper casually mentioned that they'd known that fact for two weeks.  Republican insiders I've spoken with say this race is still within striking distance for Thom Tillis, but -- and this is just my sense of things -- their optimism doesn't seem to match the apparent closeness of the polls. Though this late-breaking data point is a bit of a wild card. Regardless, these strategists seem more upbeat about New Hampshire, where (as of yesterday morning) Sen. Jeanne Shaheen's poll average lead is about a full point larger than Hagan's.  Two surveys conducted within the last week show large Shaheen leads (+7 and +8), while two others show a tie or Brown ahead by one point.  I can't quite identify why GOP insiders are suddenly more bullish on this race, but Andrea Mitchell and Joe Scarborough are apparently hearing similar things, via Meet the Press:


Hmm.  I'll believe it if and when I see it, but I'll say this: These aren't the actions of a confident incumbent. And two new polls within the last 24 hours point to a squeaker (Shaheen +2, Brown +1). If Republicans win either of these races, the rout will be on.  I'll leave you with some praise for Cory Gardner from a rather unlikely Colorado source: