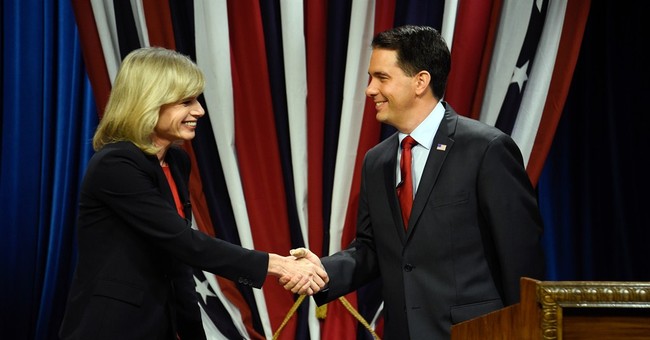 Last time we checked in on the Wisconsin gubernatorial race, Scott Walker appeared to be pulling away from Mary Burke. He led by nearly six points in the respected Marquette Law poll, had cracked 50, and enjoyed a 13-point cushion with independent voters. Then came MU's mid-October survey, in which Walker's lead vanished completely, with the race deadlocked at 47. The swing was driven by some unusual internals, such as men and independents breaking heavily to Burke, and women suddenly flocking to Walker. All three of those data points represented noticeable departures from most polling trends, but the top line number showed an exact tie -- which mirrors the RCP average.  The last three polls of the contest have produced a tie, a Burke lead of one point, and Walker edge of the same margin. With the race a pure toss-up, Democrats are making a major final push for Burke.  Not only are they deploying Bill Clinton to the state, they're also welcoming…President Obama to Wisconsin, whom Burke assiduously avoided on two previous occasions.  In my mind, this means one of two things:

Either (a) Team Burke has decided that the cake is already baked in terms of Obama's unpopularity, so while his appearance won't change many minds either way, it will potentially boost turnout among African-Americans, or (b) they've seen sufficient movement in their internal numbers that suggest Obama's image is on the mend in Badger country.  My gut goes with the former option, as O's job approval rating from Wisconsinites was still underwater by double digits in the recent NYT/YouGov poll.  The Washington Post's Robert Costa hears from Wisconsin Dems that Burke is preparing a final blitz against Walker on the (truly outrageous) John Doe "controversy," as well as the "polarizing" 2011 budget fight.  This is a neat trick the Left pulls, incidentally.  They channel sustained, distilled hatred at a Republican for years on end, engaging in mob thuggery and unprecedented opposition that would have the media reaching for the smelling salts if the roles were reversed, then pronounce their target "polarizing."  And the press nods along (read this surreal Journal-Sentinel editorial that literally imagines an alternate universe to attack Walker).  Here's what's coming in the final week-plus:


Yes, a prolific plagiarist will lecture Scott Walker on "integrity." Another edge Democrats will press is their cash advantage. Walker and his allies are being significantly outspent by the other side:


Part of the reason behind this disparity is that many of Walker's ideological kin have been completely sidelined under penalty of law throughout this entire election cycle, thanks to the partisan 'John Doe' witch hunt, which has been thrown out of court by both a state and federal judge.  The 7th Circuit Court of Appeals recently ruled that it's not the role of federal courts to interfere with a state investigation, however, dealing a blow to muzzled conservative organizations in Wisconsin, and to free speech itself.  The decision is being appealed to the Supreme Court.  In mid-October, one of the same lower court judges finally lifted the indefinite, Democratic prosecutor-imposed ban on issue-based 'coordination' between Walker's campaign and right-leaning groups.  The Left has been happily coordinating away throughout 2014, of course, with labor unions spending big against Walker.  (Reminder: Liberals don't oppose money in politics.  They oppose conservative money in politics).  And while we're on the topic of insidious political collusion, read this.  Quite a coincidence, no?  On the Republican side of the ledger, Weekly Standard writers Stephen Hayes and John McCormack -- both native Wisconsinites with deep ties to the Walker team -- report anxiety in the ranks.  Some Republicans in the state are whispering about whether the Republican Governors Association has neglected Walker's race, with some even suggesting that New Jersey Gov. Chris Christie has deliberately moved to tank a potential 2016 rival.  But Hayes and McCormack quote an RGA-connected source who says that dog won't hunt:


A GOP source with knowledge of RGA spending threw cold water on this theory. The source claimed that total RGA spending--a "large majority" of which is "focused on TV ads" but also includes things like polling, research, and field operations--has actually been $6 million in Wisconsin and $10 million in Michigan as of Tuesday. But, the source said, the RGA has $4 to $5 million in TV ad time reserved in Wisconsin for the final two weeks of the election, and the RGA will end up spending more in Wisconsin than Michigan by the time the election is over. (The Center for Public Integrity numbers certainly do appear to miss a lot: CPI doesn't show any RGA spending in Florida, but the source says the RGA has spent $17 million to date in the sunshine state). If these numbers are true--and their accuracy will certainly be scrutinized after the election when all FEC reports have been published--then concerns that Christie is undercutting Walker would appear to be unfounded.


The RGA has just announced the injection of an extra $1 million into the race for on-air ads over the final days of the campaign.  Nevertheless, extremely tight polls and internal dissension indicate that Republicans are jittery about Walker's fate.  Conservative Journal-Sentinel columnist Christian Schneider pores over the numbers and concludes that if November's electorate roughly reflects the turnout models of Wisconsin's midterm cycles, Walker will likely pull it out.  We shall see.  I'll leave you with three items.  First, a 2007 email revealing that Mary Burke's successor as Commerce Secretary in the unpopular Doyle administration asserting that Burke brought no "strategic plan" to the table when she was in the post.  (Couldn't she have just "borrowed" one?)  Second, actual proof that Walker's bald spot has become an issue in this campaign. Finally, one of the ads Walker's been running, touting his successful budget and tax reforms:


Given Walker's successful governance and Wisconsin voters' optimistic "right track/wrong track" views, this election shouldn't be close. But it's the tightest gubernatorial race in the country. Turnout, turnout, turnout.

UPDATE - Watch the Milwaukee machine at work. If voter ID laws are "voter suppression," what would this be?

Editor's note: A version of this item is cross-posted at HotAir.com