Question for the Pentagon: Is ISIS Winning? 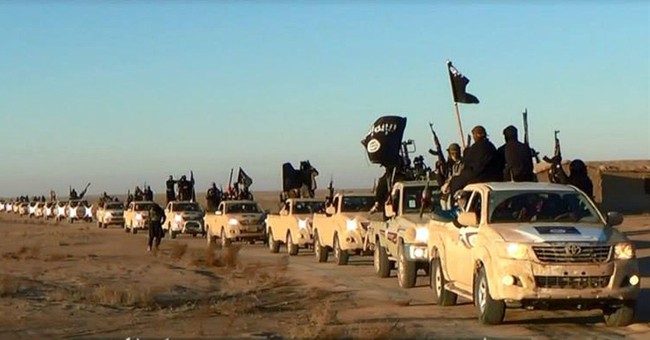 Last week, we wrote about ISIS' two-front advance in Syria and Iraq, which had reignited questions regarding the efficacy of US-led coalition airstrikes against the terrorist fighting force. At a Pentagon briefing Wednesday, a reporter asked who is winning this war.  The first 15 seconds of this Defense Department official's answer are grimace-worthy, followed by an explanation he himself describes as 'rambling' at one point:


Pull quote: "The situation changes every day. And so I'm not going to qualify who's winning or who's losing today." Allahpundit translates: "Yes, ISIS is winning."   His post is more balanced, though, noting that Kurdish fighters have reportedly ousted the jihadists from areas of the Syria/Turkey border city of Kobani, with the support of coalition bombers and drones. On the other hand, is the situation in Iraq's Anbar province deteriorating?  Some Iraqi leaders have voiced increasingly dire pleas for ground forces (beyond the country's regrouping, to put it nicely, security forces) to help defeat an entrenched enemy:

Top officials in Iraq's Anbar province issued an urgent appeal for U.S. military intervention, warning the area is in danger of falling to Islamic State militants, CNN and the BBC reported Saturday. The province is home to Iraq's second-largest dam and is just west of the capital of Baghad. Sabah Al-Karhout, president of the Anbar Provincial Council, told CNN that the council has information the militant group is sending as many as 10,000 fighters to Anbar.

The former Supreme Allied Commander of NATO appeared on Morning Joe today and asserted that current US strategy is not working, and that "ultimately -- and this is not good news -- but we're going to need to put US boots on the ground:"


President Obama has ruled out deploying American combat troops back into the theater -- even as 1,600 troops are already back in Iraq, and his administration has struggled to keep its story straight at times. The US Army's Chief of Staff has been suggesting a larger American military presence is needed on the ground for nearly a month.  Former Obama Defense Secretary has also called for a ground force to defeat ISIS, something most Americans have predicted will be necessary.  President Obama reportedly overruled the military's 'best advice' strategy on this point at the onset of the current war, which has been years in the making (and was ignored until media attention rendered continued inaction impossible).  Obama currently boasts a 33 percent approval rating on his handling of the ISIS threat.