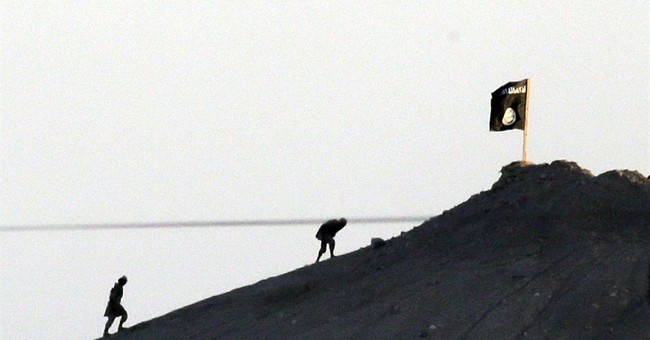 The United States and our international partners are conducting airstrikes against ISIS targets in Iraq and Syria, while stepping up efforts to train and equip "moderate" forces on the ground. Our stated goal is to "degrade and ultimately destroy" the terrorist fighting force, which numbers in the tens of thousands.  According to multiple reports, our aerial campaign, coupled with a boots on the ground-by-proxy approach, is not working.  Top military officials, a former Obama Defense Secertary, and the American people all predicted that the administration's 'light footprint' approach wouldn't be sufficient to defeat this determined and resourceful enemy.  Which brings us to this chilling dispatch from The Atlantic's Jeffrey Goldberg:

The theme of the week in the Syria conflict—that airstrikes are of only limited use in the struggle to degrade and destroy the Islamic State terror group—is about to be underscored in terrible fashion in the besieged border town of Kobani, which is under sustained, and mainly unanswered, assault by as many as 9,000 ISIS terrorists armed with tanks and rocket launchers. I just got off the phone with a desperate-sounding Kurdish intelligence official, Rooz Bahjat, who said he fears that Kobani could fall to ISIS within the next 24 hours. If it does, he predicts that ISIS will murder thousands in the city, which is crammed with refugees—Kurdish, Turkmen, Christian, and Arab—from other parts of the Syrian charnel house. As many as 50,000 civilians remain in the town, Bahjat said. "A terrible slaughter is coming. If they take the city, we should expect to have 5,000 dead within 24 or 36 hours," he told me. "It will be worse than Sinjar," the site of a recent ISIS massacre that helped prompt President Obama to fight ISIS. There have been reports of airstrikes on ISIS vehicles, but so far, Bahjat said that these strikes have been modest in scope and notably ineffective. Kobani is located on the Turkish border, but Bahjat said he is receiving reports that Turkey is pulling its troops back, rather than risk armed confrontation with ISIS. "It's unbelievable—Turkey is in NATO, so you literally have NATO watching what is happening in this town. Everyone can see it—the TV cameras are there, watching. It's terrible."

Goldberg goes on to note that Kurdish forces are badly outnumbered and outgunned, as some Kurds have resorted to suicide bombings in a grim, desperate attempt disrupt ISIS' advance.  CNN reports that Kobani is on the brink of falling, which would be a major strategic and symbolic victory for the radical group, and would result in the horrific slaughter described above. Walter Russell Mead points out that the number of coalition airstrikes against ISIS has been trifling, compared to NATO's bombings in Libya (which were "successful").  Why the disparity? Our half-baked effort from the sky is not achieving our objectives.  The US has escalated its tactics by deploying Apache combat helicopters into the theater, which is a positive step, but will it be enough to turn the tide?  Roughly 500 miles Southeast of Kobani, Syria, ISIS is reportedly encroaching on Baghdad's outskirts, having made major gains in western Iraq's Anbar province:

Islamic State militants have taken control of key cities in Iraq’s western province of Anbar and have begun to besiege one of the country’s largest military bases in a weeklong offensive that’s brought them within artillery range of Baghdad. The Islamic State and its tribal allies have dominated Anbar since a surprise offensive last December, but this week’s push was particularly worrisome, because for the first time this year Islamist insurgents were reported to have become a major presence in Abu Ghraib, the last Anbar town on the outskirts of the capital.


The State Department was forced to beat back rumors that ISIS had shelled Baghdad's 'green zone' yesterday:

Re: reports that mortars landed in the Green Zone (aka International Zone) today: We've confirmed there was NO mortar attack today in the IZ


Meanwhile, raids and arrests of homegrown Islamist militants by Australian and British security services have continued; a Chicago-area 19-year-old was also taken into custody at O'Hare airport prior to embarking on an alleged journey through Turkey to join ISIS.  The bubbling toxic stew of radicalism in this region presents a real and multi-faceted menace to free people around the world.  I'll leave you with another former Obama defense secretary candidly criticizing the president's lack of leadership ('hesitation and half-steps') on matters of foreign policy and national security:

Any theories on why Obama commands so little loyalty from likes of Panetta, Gates, Clinton?