Special Prosecutor: Actually, Scott Walker Wasn't Even a Target of Our Investigation 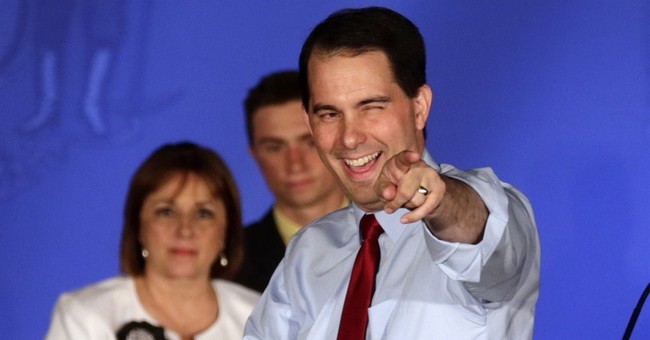 Last week, we lambasted the media's abysmally biased, lazy and context-free coverage of developments related to Wisconsin Governor Scott Walker. A quick precis: The press engaged in a feeding frenzy on freshly-released, but months-old, allegations from partisan prosecutors against Walker -- without prominently mentioning (or mentioning at all, in some cases) that those accusations had been comprehensively rejected and thrown out of both state and federal court by judges. The secret "John Doe" investigation was ordered halted, with zero charges filed against anyone. Indeed, investigators' case was so baseless that all of the inquiry's subpoenas were quashed. The media also failed to mention that the trigger for the documents' release was a lawsuit against the prosecutors by a target of the probe, which had been green-lighted by a judge who determined the misconduct suit was likely to succeed. In other words, Walker had been totally unjustly bombarded by a heavy salvo of breathless, damaging-looking headlines, and was left to attempt to push back against local and national journalists' elixir of deliberate mendacity and negligence. And now, I give you this "oh, by the way" postscript to last Friday's hype tornado:

Gov. Scott Walker has not been a target of the John Doe investigation into alleged illegal campaign finance coordination, an attorney for the special prosecutor overseeing the probe said Thursday. Randall Crocker, the lawyer for special prosecutor Francis Schmitz, noted the investigation has been halted, saying, "At the time the investigation was halted, Governor Walker was not a target of the investigation. At no time has he been served with a subpoena." Crocker issued the statement a week after a court document Schmitz wrote late last year and made public late last week identified Walker as being part of an alleged "criminal scheme" to coordinate with outside groups and violate campaign finance laws. Crocker said no conclusions have been made about whether there is enough evidence to charge anyone with a crime.


You know who did draw conclusions about "whether there is enough evidence to charge anyone with a crime"? Two different judges, who both emphatically reached the same determination and shut down the whole enterprise. Those rulings are being appealed, so Walker haters are clinging to that thread to keep hope alive. Nevertheless, today's clarification from the special prosecutor's office is significant. Not only was Walker never close to being convicted, indicted, or charged with anything -- he was never even a target of the inquiry. That utterly blows up media's (already scandalously misleading) headlines about the governor allegedly being "at the center" of a "criminal scheme." Walker's camp is pointedly and rightly claiming vindication:


In Crocker's statement Thursday, he wrote "it is wrong for any person to point to this sentence in a legal argument as a finding by the special prosecutor that Governor Walker has engaged in a criminal scheme. lt is not such a finding." Walker campaign communications director Tom Evenson highlighted that line from Crocker's letter. "After the media's slanderous reporting last week, today’s statement by prosecutors should serve as an opportunity for the media to correct the record and report the real facts of this story," Evenson said.


The question now becomes whether the damage has already been done. Rush Limbaugh's "drive by media" formulation springs to mind in this case: The Wisconsin and Beltway media raced toward this rubbish story, pumping Walker's reputation full of rhetorical bullets, then sped off. That bell cannot be un-rung, particularly in Wisconsin, where the inaccurate coverage reached saturation levels. Scott Walker has made his accomplishments in office the centerpiece of his (re)-re-election campaign. His historic budget reforms have erased structural shortfalls, helped create a sizable surplus, placed the state on a more sustainable path, relieved the burden on current and future taxpayers, and afforded school districts needed flexibility. The sky has not fallen, despite the Left's apocalyptic predictions. Unemployment is down and job creation is up on Walker's watch, with a majority of Wisconsinites saying their state is on the right track. Walker's latest round of sweeping tax cuts benefited all state taxpayers and are widely popular. His Democratic opponent is declining to campaign on the very issue that originally prompted liberals' furious protests and recall effort, opting instead to brazenly lie about Walker's record on other issues. Polls have consistently shown Walker with a modest lead in the race, but we've yet to see how last week's baseless furor will impact the campaign. As for the media's role, editors at the Milwaukee Journal-Sentinel -- Wisconsin's largest newspaper -- are playing defense over last week's terrible coverage. Charlie Sykes explains why their excuses ring hollow:


As the paper’s many critics have pointed out, the real "news" is that the released documents detail a months-old prosecution theory that has failed to gain any legal traction. Are the documents news? Yes. But should early stories have explained that news in the clear context of the judicial rulings? Yes. By not doing so, did the Journal Sentinel fuel a misleading national wave of negative stories about Walker? Yes. Stanley’s answer to such criticism? He basically argues that the judicial rulings are old news, previously reported by the paper. But in advancing that line, Stanley acknowledges that the newsroom was 100% aware of the rulings when the documents were released last week. This makes the paper’s initial stories all the more reprehensible. While the newsroom knew that two separate judges had rejected the prosecution theory, it buried that crucial fact. Stanley acts as though the mere existence of the earlier stories provides the context that local and national readers would have needed last week.

The context they buried was so important that it should have been featured in the lede of every story on the subject, if not the headline. Instead, those facts appeared nowhere on last Friday's front page -- on which the entire prized "above the fold" real estate was dedicated to the non-story. Let's see what kind of treatment the special prosecutor's clarification receives tomorrow, both in the Journal-Sentinel, and in the national press. Will the Washington Post follow-up on this nonsense "analysis"? I'll leave you with Walker's latest television ad because he deserves a little free press after the outrageous treatment he endured last week:

Uh, Obama's Reasons for Why Pete Buttigieg Can’t Win a Presidential Race May Be Very Problematic

Matt Vespa
Uh, Obama's Reasons for Why Pete Buttigieg Couldn't Win a Presidential Race May Be Very Problematic
Matt Vespa
Oh, So a Liberal Fact-Checker Was a Shill for Communist China, Huh?
Matt Vespa
Guess Who Will be Fundraising for Liz Cheney?
Bronson Stocking
'Marie Antoinette'? Kyrsten Sinema Caused Outrage Over What She Brought for the Minimum Wage Vote
Matt Vespa
The First Salvo to Keep Us Under COVID Lockdown Was Fired, But It Was So Ridiculous You Probably Ignored It