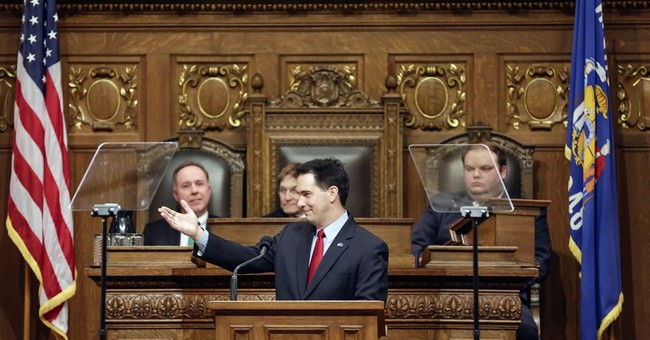 Why, it's almost as if responsible, conservative governance works:


Wisconsin will sell $294.8 million in general-obligation refunding bonds this week in a negotiated sale as the state projects a budget surplus of almost $1 billion. Surging tax revenue is driving improved fiscal performance in Wisconsin, with a population of 5.7 million. The improvement in the state’s tax collections ranked seventh in the nation during the 12 months ended in June, according to the Bloomberg Economic Evaluation of States. The state had originally projected a surplus of $130 million as of mid-2015.


As we noted in late January, the state's "surging tax revenue" was decidedly not precipitated by tax increases. Governor Scott Walker -- who has cut taxes several times over his first term -- urged passage of an additional tax relief package in his 2014 state of the state address, arguing that the unexpectedly large surplus ought to be "returned to taxpayers because it's their money." Last week, the Republican-held legislature complied with the governor's request, over the strident and eternally predictable objections of tax-and-spend Democrats:


Republicans moved closer to making Gov. Scott Walker's plan to use the state's surplus to cover $504 million in tax cuts reality Tuesday, pushing the measure through the state Senate despite Democrats' complaints the proposal is just a token election-year ploy. The bill now heads to a final vote in the state Assembly. That chamber has already passed the measure but must agree with changes the Legislature's budget committee made to win a key senator's vote...Passage is all but certain. "The hardworking taxpayers of Wisconsin know how to spend their money better than politicians in Madison do," Walker said in a statement ... Walker also introduced another bill that would use about $35 million from the surplus to fund new Department of Workforce Development job training grants, including grants to eliminate technical college waiting lists for high-demand fields, help high school students get job training for high-demand jobs and help the disabled find work. The Assembly passed that bill last week. The Senate followed suit Tuesday, approving it unanimously. That measure now goes to Walker for his signature.


Final passage is expected one week from today. Walker fashioned some of these tax cuts with a populist flair, targeting certain breaks specifically for blue-collar workers. Nevertheless, Democrats have griped that the plan favors the rich and won't benefit the middle class. Facts aside, their script stays the same -- even as they vote en masse for Walker's jobs training bills. Here's what Madison Democrats aren't eager to discuss: Walker inherited a large structural deficit from his Democratic predecessor, who raised taxes massively. When the Republican chief executive led a successful budget reform fight in 2011, the Left issued shrill predictions of fiscal doom and mounted a costly recall effort. They failed on both counts.

Walker's governorship was re-affirmed by a larger margin than his 2010 victory, and the predicted meltdown never played out. In fact, the state now enjoys a large surplus, while local school boards have taken advantage of their new budgetary freedoms to balance the books without laying off teachers. The Milwaukee Journal Sentinel's editors conceded that the "sky isn't falling" in a 2011 editorial, as conservative observers were more generous in their praise. Big Labor was never truly convinced that Walker's reforms wouldn't work. No, the union bosses were petrified that they would work, and that the only resulting "calamity" would be a precipitous drop-off in (now voluntary) union participation. They were certainly right about that. Meanwhile, Walker's 2014 opponent has released her first television ad, which suggests that Wisconsin's unemployment rate has increased on the incumbent's watch. This claim is so wrong that left-leaning fact-checker Politifact had no choice but to rate it "pants on fire" false. Walker's team sets the record straight in an ad of their own:

Here's Walker spelling out the case for his soon-to-be finalized tax cuts. According to a 2013 survey of Wisconsin business owners, 95 percent say they are optimistic about the state's economic trajectory, up from just 10 percent under Governor Doyle. And Mary Burke may not want to "go there" on unemployment. Walker's supporters have noted that the only time in the last 25 years when Wisconsin's unemployment sagged below the national average was when she led the state's Commerce Department.