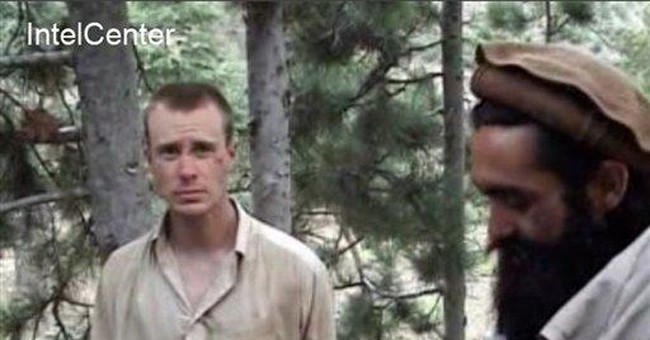 An astonishing scoop last night from Fox News' James Rosen -- whose access to sources has, ahem, attracted the Obama administration's intense scrutiny in the not-so-distant past. Whoa:

A senior official confirms to Fox News that the conduct of Sgt. Bowe Bergdahl -- both in his final stretch of active duty in Afghanistan and then, too, during his time when he lived among the Taliban -- has been thoroughly investigated by the U.S. intelligence community and is the subject of "a major classified file." In conveying as much, the Defense Department source confirmed to Fox News that many within the intelligence community harbor serious outstanding concerns not only that Bergdahl may have been a deserter but that he may have been an active collaborator with the enemy. The Pentagon official added pointedly that no relevant congressional committee has sought access to the classified file, but that if such a request were made, key committee chairs would, under previous precedent, likely be granted access to it. Separately, the Pentagon confirmed Monday that it is looking into claims Americans died during the search for Bergdahl...Sources told Fox News that many officials in the Executive Branch are "quite baffled" by the White House's decision to allow the president to stand alongside Bergdahl's father this past weekend, given the father's history of controversial statements, emails and online posts.


The Weekly Standard's Stephen Hayes is also out with a searing piece in which soldiers from Bergdahl's former platoon forcefully reject Susan Rice's description of the former hostage as having served the US with "honor and distinction:"

"That's not true," says Specialist Cody Full, who served in the same platoon as Bergdahl, and whose tweets over the weekend as @CodyFNfootball offered an early firsthand account of Bergdahl's departure. "He was not a hero. What he did was not honorable. He knowingly deserted and put thousands of people in danger because he did. We swore to an oath and we upheld ours. He did not." "He walked off—and 'walked off' is a nice way to put it," says Specialist Josh Cornelison, the medic in Bergdahl's platoon. "He was accounted for late that afternoon. He very specifically planned to walk out in the middle of the night." "He was a deserter," says Specialist Full. "There's no question in the minds of anyone in our platoon."...One uncomfortable question that has vexed those involved in the Bergdahl case: Was Bergdahl merely a deserter or was he, possibly, a Taliban collaborator? ...Several military officials who spoke with THE WEEKLY STANDARD noted privately that Taliban attacks on U.S. forces in the Paktika province seemed to increase in frequency and effectiveness...[Some] wonder whether Bergdahl helped the Taliban, either willfully or under duress. In the hours after he disappeared, according to sources familiar with the intelligence, U.S. troops received an intelligence report that Bergdahl stopped in a local village and asked how to find the Taliban.


More evidence pointing to desertion continues to emerge, including this account from NBC News, which has been echoed elsewhere:

soldier who served with #Bergdahl says he left behind his body armor, night goggles, all sensitive equipment before leaving his best.


The Associated Press reports that Bergdahl was never listed as an official prisoner of war (POW) by the US government, and that a Pentagon investigation determined in 2010 that the soldier had, in fact, "walked away from his unit." This led the military to decide "not to exert extraordinary efforts to rescue him," according to the story. Nevertheless, efforts were undertaken, and Americans were killed in the process. In case you missed it yesterday, here is Jake Tapper's powerful interview with a soldier who served with Bergdahl (skip ahead to the seven minute mark of the clip):


"For him to just leave us like that, it was a very big betrayal...he's at best a deserter, and at worst a traitor."


Bergdahl's harshest critics aren't political conservatives seeking to score political points against an administration that seems caught off-guard by how quickly this story has turned south. They're his former brothers in arms:


Which brings us to a series of excellent and confounding questions from Allahpundit, who's as mystified by all of this as I am:

But if all that’s true … why was Bergdahl promoted in absentia to sergeant in 2011? Why would he be in line for another promotion, to staff sergeant, this month? And why would the White House let itself get within a thousand miles of the Bergdahl family with suspicions like these ready to bubble over? It’s one thing to do a deal to get an American back; it’s another to give away the terrorist farm as part of it; and it’s another still to give away the farm for a guy whom your own investigators think may be a Taliban sympathizer. Remember, the ostensible point of the prisoner exchange is to set a precedent so that Obama can release other detainees at Gitmo later this year and finally close the prison. The last thing you’d want to do in that case is trade five especially dangerous detainees for someone whose loyalty to the U.S. is in serious question even within the administration’s own ranks. It’s a political tornado in the making; if Bergdahl does end up being proved a deserter or worse, Democrats will run screaming from future Gitmo prisoner releases. Just doesn’t make sense. Maybe the White House has reason to believe that Bergdahl’s getting a bum rap and really was taken against his will — but in that case, why isn’t Carney or anyone else pushing back hard with that information? What’s going on here?


It really doesn't add up. Why would the administration expose itself to horrific press like this if even half of these allegations are true? "Leave no man behind" is a worthy ideal, but the White House went far beyond simply securing Bergdahl's return. They traded five high-level jihadists for him, held a press event with his parents, and touted his return as a wonderful development. Susan Rice lavished praise upon him on national television. Could they possibly been blindsided by all of this stuff? I'll leave you with this. Brutal:

AP: Hagel met with silence when he told troops in Bagram hangar: "This is a happy day. We got one of our own back." http://t.co/vRYVip31tr


That top-level administration officials would even attempt to shovel BS to people who have every reason to know better is almost beyond belief -- unless they themselves were somehow unaware of the allegedly ugly side to Bergdahl's story. Again, I find that exceedingly difficult to believe. Could they have been laboring under the delusion that they could fairly effortlessly elide certain nasty details by talking this up as a feel-good triumph, from which the public would quickly move on? Inexplicable.
78,000 Pounds of Baby Formula Arrive On First Flight of 'Operation Fly Formula'
Sarah Arnold
RNC Made a Whopping $1M More Than DNC
Sarah Arnold
Gen. Milley Warns West Point Graduates of 'Significant International Conflict'
Sarah Arnold
When It Comes to Economic Success That's Happening, Let's Not Forget It's in the Red States
Rebecca Downs
Did Joe Scarborough Forget He Sponsored a Resolution Against Rev. Al Sharpton?
Rebecca Downs
18 Senators Call to Defund Biden Disinformation Board
Sarah Arnold
CARTOONS | Steve Kelley
View Cartoon
Most Popular