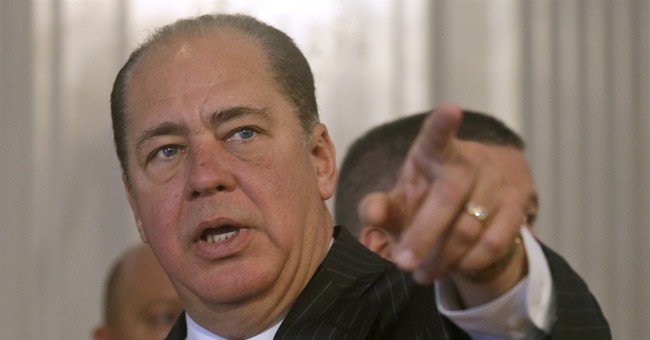 Memo to mainstream voters: When the chips are down -- with extremely rare exceptions -- "pro-life" elected Democrats do not exist (via Life News):


Democratic Governor Earl Ray Tomblin, who describes himself as pro-life and campaigned as a pro-life candidate, has vetoed a bill that would ban abortions after 20 weeks of pregnancy. West Virginians for Life, the statewide pro-life group, tells LifeNews it is disappointed in Governor Tomblin’s veto of HB 4588, the Pain-Capable Unborn Child Protection Act. Similar bills have been passed in ten other states and Governor Tomblin is the only governor who has vetoed one of these bills. In his veto message, the Governor claimed that attorneys advised him the bill was unconstitutional.


He's so "pro-life" that he sided with the extreme abortion lobby to block a law that protects pain-capable unborn children in the sixth month of pregnancy and beyond. He used constitutional concerns as a fig leaf, even though a similar law in Texas was recently upheld by the Fifth Circuit Court of appeals. Fairly far-reaching bans on late term abortions enjoy overwhelming public support, especially among women. As Cortney reported in late February, West Virginia's legislature passed this common sense measure by wide margins; 79-17 in the House, and 29-5 in the Senate. Based on my reading of the state's constitution, legislators have the requisite numbers to override Tomblin's veto. After a contentious party meeting, dozens of Democrats decided to back the legislation. West Virginia is a heavily pro-life state, which is why Tomblin dishonestly campaigned as an abortion opponent. But when confronted with an opportunity to protect significantly-developed unborn children by ending a barbaric practice, Tomblin abandoned his fake position and bowed to the radicals who run his party. Remember, top officials at Planned Parenthood, America's top abortion provider, can't say when life begins. The group's president dodged the question repeatedly, eventually stating that she believed her children (the surviving ones, at least) became human lives after they were born. Another organization official refused to state whether post-birth abortions, generally known as "infanticide," would be acceptable under the group's understanding of abortion "rights:"


That testimony promotes a wildly out-of-the-mainstream position that has been defended by Barack Obama on multiple occasions. Elsewhere, Planned Parenthood has taken sides against a black, female Democrat in Pennsylvania. Why? She supports holding abortion clinics to certain medical and sanitary standards, a position that became personal when her cousin was killed in Kermit Gosnell's filthy abortion den. That "clinic," which operated under overtly racist practices -- escaped regulatory scrutiny for years because the abortion lobby successfully lobbied the political class to shirk the law. Democrats used to claim they wanted abortion to be "safe, legal and rare." Their actions belie the "safe" part, and their party platform has excised the "rare" bit. The Democrat Party establishment is determined to champion abortion and protect the revenues of who profit from it. Democrats are rewarded handsomely in political contributions for their extremism.