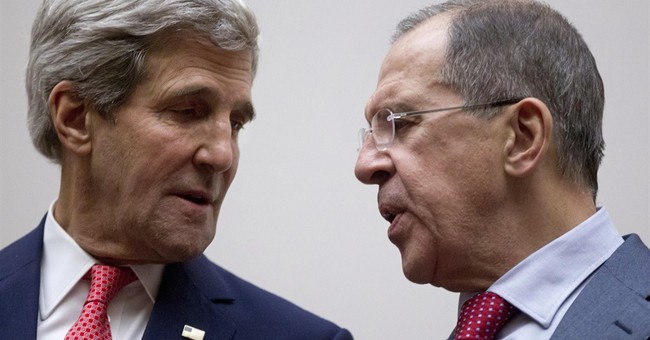 The Obama administration continues to push for a deal with the Iranian regime, which has been pursuing an illegal nuclear program for years and is the world's leading sponsor of terrorism. Sen. Harry Reid, at the behest of the White House, has blocked any vote on the broadly-supported, bipartisan Menendez-Kirk sanctions bill, the intention of which is to strengthen Obama's hand at the negotiating table. In spite of White House claims of tangible progress when the initial agreement was signed, senior Iranian officials have disputed Washington's interpretation of key verbiage (the text of the agreement remains shrouded in secrecy). Tehran's Foreign Minister, Mohammad Javad Zarif, insisted that his government "did not agree to dismantle anything" at all. Western critics of the deal say it merely places Iran's enrichment process on pause, and all Iranian concessions are easily reversible. But new comments from a State Department official suggest that Iran is pursuing clandestine methods of bypassing even this fig leaf of a "pause button." Reuters reports:

Iran has pursued a longstanding effort to buy banned components for its nuclear and missile programs in recent months, a U.S. official said on Sunday, a period when it struck an interim deal with major powers to limit its disputed atomic activity. Vann Van Diepen, Principal Deputy Assistant Secretary of State for International Security and Non-Proliferation, said Iran was still “very actively” creating front companies and engaging in other activity to conceal procurements. The reported supplies do not contravene last year’s breakthrough agreement between Tehran and six world powers to curb its most sensitive atomic activity in exchange for some limited easing of sanctions damaging its economy. But such trade would breach a 2006 U.N. embargo banning the provision by any nation to Iran of materials related to its nuclear and missile development work. Western experts say such low-profile procurement efforts by Iran date back many years, perhaps decades in the case of its nuclear activity. Asked if he had seen a change in Iranian procurement behavior in the past six to 12 months, a period that has seen a cautious thaw in U.S.-Iranian relations after decades of hostility, Van Diepen replied: “The short answer is no. “They still continue very actively trying to procure items for their nuclear program and missile program and other programs,” he told Reuters in an interview.


This is the government upon whom the Obama administration's brain trust is relying as partners for peace. A regime that continues to cheat and seek nuclear contraband, while publicly flaunting the fact that they've never agreed to dismantle any portion of their illegal program -- and daring the White House to release the text of the deal. The agreement, signed in November, is less stringent than existing United Nations requirements. Israel has understandably been hyper-critical of the accord, condemning it as an "historic mistake." Just yesterday, the Israeli Defense Minister said publicly that America is "demonstrating weakness:"

I was in Singapore and heard disappointment about China getting stronger and the US getting weaker. Look what’s happening in Ukraine, where the United States is demonstrating weakness, unfortunately...We had thought the ones who should lead the campaign against Iran is the United States. But at some stage the United States entered into negotiations with them, and unhappily, when it comes to negotiating at a Persian bazaar, the Iranians were better. Therefore, on this matter, we have to behave as though we have nobody to look out for us but ourselves...People know that Iran cheats. But comfortable Westerners prefer to put off confrontation. If possible, to next year, or the next president. But in the end, it will blow up.


American weakness in eastern Europe isn't unrelated to our posture vis-a-vis Iran. Not only are the mullahs watching our every move and evaluating our resolve and seriousness with great interest, our deteriorating relations with Moscow is having a direct impact on our Iran policy. In what the Washington Post's Jen Rubin calls an effort to "stiffen Obama's spine," eighty-two Senators have signed a letter to the president, laying out the principles that must undergird any finalized deal with Tehran. Failure to achieve these concrete ends, the letter warns, will result in an aggressive push for new sanctions:


The letter sets out the principles that should be embodied in a final deal including: no right for Iran to enrich uranium; dismantling Iran’s nuclear weapons program and preventing it “from ever having a uranium or plutonium path to a nuclear bomb”; addressing the issues in “United Nations Security Council resolutions, including any military dimensions of its nuclear program”; and robust sanctions. The letter also makes clear that if Iran violates the interim deal, uses talks as a stalling tactic or walks away from the talks, “pressure will intensify.” This comes in the context of the next round of Iran talks in Geneva and marks the first time the Senate has gone on record with a statement of the final terms of an acceptable deal. The Senate is insistent that it be involved in the outcome of talks and potential resumption of sanctions; no free hand will be given to the administration.


Rubin believes the P5+1 talks in Geneva are already "headed downhill." I'll leave you with a clip I'm re-upping from January. Here's CNN's Fareed Zakaria -- hardly a hawkish Zionist -- explaining why he fears the US-orchestrated interim agreement is a "trainwreck:"

Our Syria policy lies in shambles, and Syria is Iran's top regional client state. Who can argue that Zakaria's assessment is mistaken?