Iran on Nuke Deal: 'We Did Not Agree to Dismantle Anything' 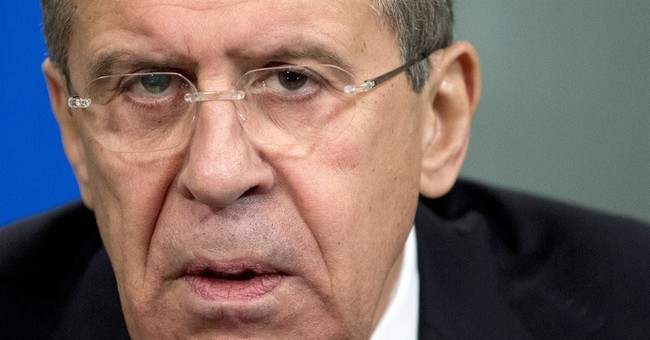 The White House was so eager to strike a deal with Iran's outlaw regime that it nearly pulled the trigger on an accord that even France's left-wing government thought was too weak. Adjustments were made, and the deal was announced in late November. National security hawks fumed. Lawmakers on both sides of the aisle balked. And Israel excoriated the plan as a "historic mistake." In response to the Obama administration's actions, a bipartisan group of Senators drew up legislation that threatens Iran with an additional barrage of economic sanctions if the deal were to fall through. The White House loudly opposes the bill, arguing that it would alienate the Iranians and weaken their negotiating position. The Wall Street Journal editorialized against the folly of this logic just before Christmas:


President Obama says he won't sign a deal with Iran that fails to stop its nuclear weapons program. So why is he threatening to veto a Senate sanctions bill that would strengthen his hand in negotiations with Tehran? That's the big question after the White House promised to veto the "Nuclear Weapon Free Iran Act of 2013" that a bipartisan group of Senators introduced on Thursday. Thirteen Democrats joined 13 Republicans as co-sponsors of the bill that would impose more sanctions on Iran only if the talks on a final agreement fail. The veto threat means the President is siding with Iran against a bipartisan majority in the U.S. Congress...Pardon us for looking at the merits, but the bill would do nothing to undermine the talks unless Iran isn't serious. Mr. Obama keeps saying that previous sanctions—which he resisted at every turn only to take credit later—are what brought Iran to the bargaining table. The current bill written by New Jersey Democrat Robert Menendez and Illinois Republican Mark Kirk simply warns Iran's rulers of worse sanctions if they walk away. The bill would tee up tighter restrictions on Iran's petroleum industry, access to foreign bank holdings and investment in engineering, mining and construction. This sharpens the incentive for Iran to dismantle its illegal nuclear facilities.


It's the stated position of the United States government that a nuclear-armed Iran is unacceptable and a dire threat to world peace. The White House has touted the agreement for months, issuing a "fact sheet" that brags that the compact requires Iran to "dismantle the technical connections required to enrich" above five percent. Iran's foreign minister is having none of it, telling CNN yesterday that the world's leading state sponsor of terrorism "did not agree to dismantle anything" in signing onto the deal. Terrific:

Iranian Foreign Minister Mohammad Javad Zarif insisted Wednesday that the Obama administration mischaracterizes concessions by his side in the six-month nuclear deal with Iran, telling CNN in an exclusive interview that "we did not agree to dismantle anything." Zarif told CNN Chief National Security Correspondent Jim Sciutto that terminology used by the White House to describe the agreement differed from the text agreed to by Iran and the other countries in the talks -- the United States, Britain, France, Russia, China and Germany. "The White House version both underplays the concessions and overplays Iranian commitments" under the agreement that took effect Monday, Zarif said in Davos, Switzerland, where he was attending the World Economic Forum...Zarif accused the Obama administration of creating a false impression with such language. "The White House tries to portray it as basically a dismantling of Iran's nuclear program. That is the word they use time and again," he said, urging Sciutto to read the actual text of the agreement. "If you find a single, a single word, that even closely resembles dismantling or could be defined as dismantling in the entire text, then I would take back my comment." He repeated that "we are not dismantling any centrifuges, we're not dismantling any equipment, we're simply not producing, not enriching over 5%."


Critics of the Senate's new sanctions bill have thrown any number of epithets at its supporters: Zionists, warmongers, turncoats (regarding those Democrats who've defied the White House), and so on. But as the Journal explained late last year, the legislation applies pressure on Iran to work toward, and follow through on, a final deal. It also sends a signal that even though the interim agreement resulted in a loosening of existing sanctions, the United States is prepared to clamp down if Iran demonstrates itself to be unserious. Finally, it sends another (equally obvious) message: We are deeply suspicious of you. As well we should be. Iran is the planet's top exporter of terrorism, they've helped kill Americans in Iraq and elsewhere, and its leaders are disgusting, antisemetic despots who routinely threaten Israel, oppress women, and slaughter their own people. They are practically the dictionary definition of bad faith actors, and they'd love nothing more than to buy themselves additional time to develop illegal nuclear weapons while taking the credulous West for a ride. Indeed, the Iranian regime announced 34 new nuclear sites in October, as negotiations were underway. This administration says its goal is to precipitate the dismantling of Iran's nuclear program. The "historic" agreement American diplomats just engineered does not further that end at all, according to the Iranians. What are we to make of this exercise in "smart power"? I'll leave you with Charles Krauthammer -- who scoffed at the notion that Iran's new president is a "moderate" -- explaining why the Obama/Kerry deal is a "catastrophe:"


I think the deal is a catastrophe. I think it is the worst deal since Munich, and I think it might even be more cynical than Munich, because I think those signing it, to give them credit, I think they actually know that it is the keys to the kingdom for the Iranians. I mean, the foreign minister already said that this is a victory, that the West has surrendered to the will of Iran. And they have spelled out exactly in what ways it’s a complete victory. They do not have to suspend enrichment. They’re given the right to enrich, which of course the fundamental idea of non-proliferation is you do not enrich uranium. There are five Security Council resolutions demanding an end and a reversal of their enrichment. Well, this gives them until eternity the right to enrich. The only thing it does is it prevents the enrichment to 20%, but that’s meaningless. They’re continuing to enrich to 3-5%, and from there, to 20%, and from there to weapons grade is a matter of weeks. So they’re doing that. They’re producing new centrifuges. There is no restriction whatsoever in the end on their working on the weaponization of a bomb. There isn’t even inspection of the Parchin facility, which is where they’re working on nuclear triggers. And lastly, what they’ve boasted about is well, the 20% enriched uranium has to be, in fact, John Kerry said it has to be destroyed. That’s simply not true. 20% enriched uranium is turned into uranium oxide. Here’s the bad news. That is a reversible chemical process. The foreign minister boasted that everything they do that pushes the pause button can be reversed in a single day.


According to the administration's defenders and Iran's enablers, this is wonderful progress, and anyone who doesn't buy into that is opposed to peace. Iran critic Jeffrey Goldberg offers the opposing view on this, urging the Senate to hold off on sanctions legislation, even as he concedes that the negotiations probably won't work in the end.


UPDATE - CNN's Fareed Zakaria, hardly an uber-hawk, calls the Iran deal a "trainwreck," in light of his recent conversation with Iran's president: