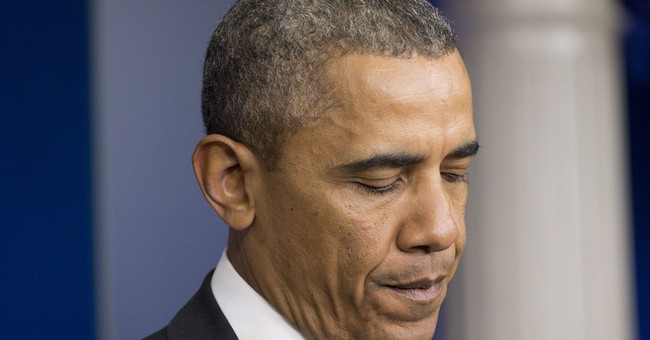 We've seen more than a few a few horrific polls for Barack Obama over the course of the last few months, but the latest nationwide survey from Fox News may well be the worst of the bunch. One brutal result after another:


(1) Obama's overall approval/disapproval hit an all-time low in the series at (38/54), with just 28 percent of independents, 39 percent of women, and 38 percent of young voters approving of his job performance.


(4) This next round is especially punishing. Respondents were asked whether the Obama administration has largely succeeded or failed at the following tasks:


(5) The balance of the questions pertain to hypothetical 2016 politics, which I routinely dismiss as useless at this stage. The news is best for Hillary Clinton out of anyone in the bunch, though. Click through if you're interested in any of the details.


Finally, some liberals' predictable reaction on Twitter to this polling Chernobyl for O was to discount the data because it's associated with Fox News. They're evidently unaware that Fox uses an outside, bipartisan, scientific polling firm to conduct its surveys, like all other media outlets. Fox News polls generally have not been outliers in recent years. Gallup and the NYT/CBS News polls have also shown Obama getting battered over the last two weeks.