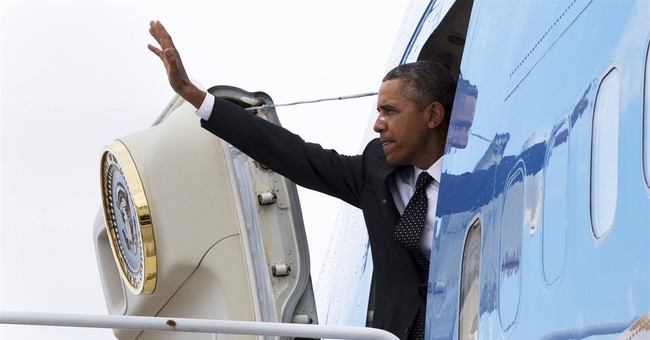 Katie wrote up one major element of the new New York Times/CBS News poll -- namely that nearly six in ten Americans are disappointed in Barack Obama's presidency -- but there are additional pieces of data worth teasing out and underscoring as well:

(1) The president's approval rating has once again slumped to 41 percent overall, with a majority disapproving of his performance. Independents disapprove (37/53). The president is underwater by double digits on foreign policy (39/48) and on the economy (38/57).

(2) Fully 79 percent of respondents describe their attitude toward Washington, DC's politics as "dissatisfied" or "angry." Just 10 percent of the country is "very satisfied" with the Obama presidency. Hope and change is long dead.

(3) Republicans hold a three-point lead (42/39) over Democrats on the generic Congressional ballot, and that's among registered voters, as opposed to likely, voters. Likely voters tend to lean more conservative. For reference, the final NYT/CBS poll before the 2010 Republican landslide showed Democrats leading on this question by one point.

(4) The new poll poll is D+7, which is an accurate reflection of the electorate composition over the last two presidential cycles. The 2010 midterm partisan turnout breakdown, by contrast, was D+0. National Journal argues that while conservative critiques of polling samples (including from yours truly) turned out to be misplaced in 2012, our previous arguments apply more aptly in the 2014 cycle. A plurality, 38 percent, of respondents in this poll categorize themselves as independents. Among that group, they lean GOP by nine points.

(5) On Obamacare, it seems as though this pollster has stopped asking the binary support/oppose question, on which the law has consistently been upside down by 12 to 25 points in virtually all polling. They're now giving respondents three options, asking whether they support the law and want it kept intact, whether they want to see changes to the law, or whether they favor full repeal. On that question, just six (!) percent pick the first option. Half of respondents want changes, and 42 percent back full repeal. Some liberals may try to spin this into evidence of public support for the law, which couldn't be further from the truth. When offered the choice between maintaining the current law or scrapping it, repeal wins easily. A substantial majority would prefer to return to the pre-Obamacare system than continue under the new law as it exists. And super-majorities oppose the individual mandate tax, which is the tent pole of the law. Make that popular "change," and Obamacare collapses. Among the few popular elements of Obamacare are protecting people with pre-existing conditions and allowing "children" to remain on their parents' plans through age 26 -- both of which will certainly be preserved in an eventual Republican alternative to the law.

(6) On immigration reform, 53 percent say most illegal immigrants should be allowed to stay in the US and apply for citizenship. 43 percent say they should either be allowed to stay without a path to citizenship, or should be removed from the country. On global warming, slightly more people say the phenomenon is naturally occurring or doesn't exist than believe it's caused by human activity. Fifty-six percent of respondents believe same-sex marriage should be legal (including 40 percent of Republicans), but two-thirds believe the decision should be left up to the states. A slim majority (51/46) favor marijuana legalization. A significant majority (38/61) support stricter limits or outright bans on abortion.