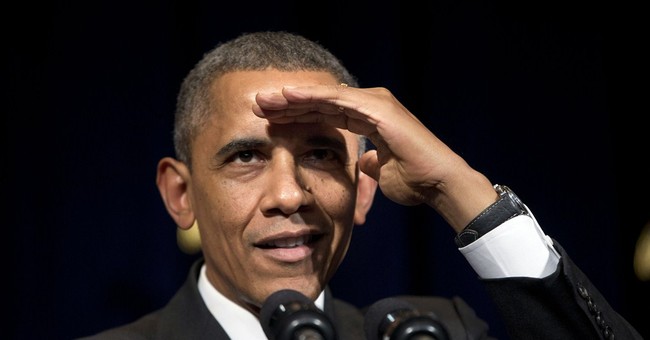 We knew this -- yes, specifically this -- was coming, and here it is:


The Obama administration is set to announce another major delay in implementing the Affordable Care Act, easing election pressure on Democrats. As early as this week, according to two sources, the White House will announce a new directive allowing insurers to continue offering health plans that do not meet ObamaCare’s minimum coverage requirements. Prolonging the “keep your plan” fix will avoid another wave of health policy cancellations otherwise expected this fall. The cancellations would have created a firestorm for Democratic candidates in the last, crucial weeks before Election Day. The White House is intent on protecting its allies in the Senate, where Democrats face a battle to keep control of the chamber...Allowing insurers to continue offering noncompliant health plans for several years would substantially alter the health insurance landscape under ObamaCare. It would also undercut one rationale for the healthcare reform law. Under the Affordable Care Act, health plans are required to offer 10 medical benefits that the Obama administration deems essential.


The Hill is clearly correct that his move is aimed at providing nervous Congressional Democrats with a fig leaf on Obamacare. Its analysis that this extended "fix" will "avoid another wave" of cancellations isn't quite accurate, though. This maneuver will mitigate the next wave for some Americans, but many won't be granted a reprieve from Democrats' broken promise. A bipartisan group of state insurance commissioners and Attorneys General rejected this "keep your plan" band aid when it was first proposed by Obama, calling it unworkable and/or illegal. Health insurance companies prepared for years to offer plans that complied with Obamacare's new rules -- and those rules haven't been altered or repealed. The administration has essentially said that they simply won't enforce them for a little bit longer. Just long enough, in fact, for some Americans to dodge cancellation notices scheduled for this coming fall. The pain will still come; it's just been pushed back a bit for some consumers.

Another important reminder is that Moody's credit agency downgraded the health insurance industry in January, citing the endless cycle of policy uncertainty caused by destabilizing political delays and "fixes." This turmoil may compel some companies to pull out of certain markets, and will almost certainly contribute to premium increases. Those who are covered by this "keep your plan" stay of execution will be allowed to maintain their "sub-standard" (in the White House's eyes) coverage, which entails fewer mandates and costs less. Insurers who do scramble to keep these plans intact are (a) spending resources to do so and (b) are taking a revenue hit as a result. Under Obamacare's model, these people are supposed to pay more to offset the new costs of insuring high-risk consumers with pre-existing conditions. Rather than absorb those new costs -- profit margins are tight -- they will be passed down and spread out across other consumers in the form of higher premiums or out-of-pocket expenses.


Ultimately, though, this gambit isn't about health coverage, helping people or righting wrongs. It's about handing Democrats across the country a thin reed of an excuse when the next batch of cancellations hit. "The president tried to make this right, but some states and greedy insurers refused to go along with this fix for the American people," they'll try to argue. This is bogus, and I strongly suspect it won't work. This administration wrote these rules in such a way that they knew tens of millions of people would lose their existing coverage, contra Obama's repeated promises. Republicans saw this problem coming years ago and offered a legislative correction to keep the pledge back in 2010. Democrats voted in lock-step to kill it. The catalyst behind the president's quasi-apology and "fix" idea was a ripple of abject panic among Democrats, who were getting pummeled by terrible headlines last fall. Many began to float freelance ideas to change Obamacare, several of which would have deeply undermined the law's viability. Obama's cobbled-together plan was pure damage control. The forthcoming extension is round two of said damage control. It's that simple. And why am I confident that it won't move the needle much? One of the Democrats who's been leaning on this Obama-crafted excuse is Sen. Kay Hagan, whose approval rating has tanked into the low-30's, with Obamacare submerged in unpopularity among her state's voters. In other words, she's been clinging to this lifeline for months and it hasn't helped her. The president, meanwhile, is mocking Republicans. Why, when he so generously tries to "improve" Obamacare, the GOP calls him a tyrant, those hypocritical ingrates:


He's being smirkingly obtuse on purpose. Republicans are leveling two separate objections here: First, that Obamacare isn't working and needs to be changed and repealed, and second, that Obama is overstepping his authority by simply decreeing unilateral changes to a duly-passed piece of legislation. His administration has made one alteration after another, several of which have been deemed legally dubious by legal scholars and media types alike. Indeed, when the House passed a bill to delay the law's employer mandate (which Obama has now done twice, single-handedly), the White House threatened a veto. Obama wants to alter and tweak this law as he sees fit, without any regard for that pesky co-equal legislative branch. Not only doesn't he care whether what he's doing is legally permitted, he's going a step further by ridiculing the GOP for raising questions about it. This from a guy who, as a candidate, rammed Bush for expanding executive authority while waxing poetic about how "seriously" he takes the Constitution. Whatever you say, champ.


UPDATE - I discussed these changes with Neil Cavuto moments ago: