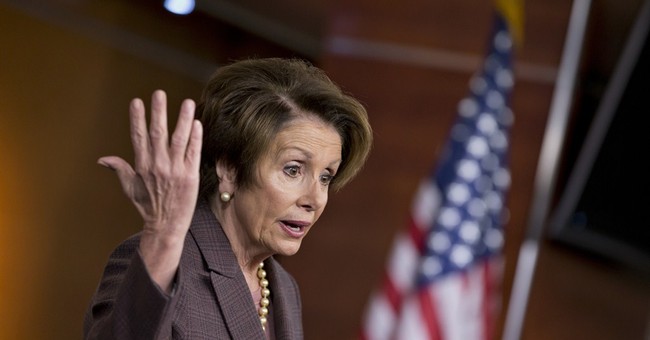 Republicans retaining control of the House of Representatives after November's elections would officially usher in the lame duck years of Barack Obama's presidency. Democratic party elders seemed to bow to the inevitable in late January when they began openly discussing the possibility of hoisting the white flag on Congress' lower chamber. That strategic retreat, they said, would allow the party to marshal its resources and defend its imperiled Senate majority via triage. In spite of this 'desperate times' approach, one would assume that the Democratic Congressional Campaign Committee (DCCC) would at least put on a brave face and offer perfunctorily upbeat assessments of Democrats' chances. They, after all, have donors to motivate, candidates to encourage, and incumbents to persuade to hang on for another cycle. So what to make of this?

The Democratic Congressional Campaign Committee released its initial list of top 2014 races Monday. The 19 districts and 16 individual candidates who won the committee's "Red to Blue" designation show which races are drawing early attention from the party, but they also demonstrate, along with races not on the list, how difficult it will be for Democrats to capture the House majority. First of all, the DCCC named 16 initial Red to Blue candidates this week, but the party needs to net 17 House seats for a majority. Plus, three of the designees are for seats that Democrats already hold, and retirements by two Democrats in conservative areas—Reps. Jim Matheson of Utah and Mike McIntyre of North Carolina—put the party in an even deeper hole. Republicans are expected to win those seats without much of a fight. If last year is any indication, some of the 19 second-tier "Emerging Races" districts the DCCC also identified Monday will get promoted as the cycle goes on, but the initial list outlines how difficult it is for Democrats to win the House.


Democrats need to net 17 seats to regain a House majority -- a tall order, especially given the fact that the GOP believes it can expand its majority by picking off a number of Democrat-held seats. It's telling that the DCCC could only dream up 16 "red to blue" candidates to list as prime targets. Even if Democrats managed to guide every single one of those 16 to victory, that still wouldn't be sufficient to win the House. As National Journal also notes, three of the 19 overall "red to blue" races, er, aren't red; they're seats that would stay blue if Democrats prevail. Perhaps it's not too difficult to see how an electoral model run last month determined that Democrats' chances of recapturing the House topped out at...one percent. The DCCC's Republican counterpart (NRCC) is calling attention to an interview that aired on MSNBC this morning, in which DCCC chairman Rep. Steve Israel served up a conflicting and confusing message about his party's chances this fall. Among other things, Israel said it is "too early to say" whether his party will secure a House majority. That cautious response may seem prudent today, but it's a stark reversal from what Israel told USA Today just a few months ago:

The leader of the DCCC has gone from "I think we have a good chance of winning the House" in November, to "oh, it's just too early to say, really" in March. That's not a subtle shift. Democrats can read the writing on the wall, which is why they're sprinting toward a "save the Senate!" approach. Speaking of which, Republicans recruited an excellent candidate in Colorado's Senate race, in which incumbent Sen. Mark Udall looks more vulnerable than ever. The GOP actually managed to strategize successfully, effectively clearing the field for talented up-and-comer Rep. Cory Gardner. Winning Udall's seat is by no means a slam dunk for Republicans, but Gardner will be a strong candidate -- and numbers like this can't be shrugged off:


Lest you think that's a rosy red, home-cooked GOP polling result, recall Quinnipiac's recent numbers in the Rocky Mountain state. According to a statewide survey released last month, President Obama's approval rating is deep underwater in Colorado, and Udall's re-elect number was in the low 40's. Democrats are going to have to work hard to successfully defend this seat, and resources are finite. Every dollar that goes to Denver is a dollar that isn't headed to Little Rock, or Raleigh, or Baton Rouge, or Anchorage, or Detroit, or Helena, or....