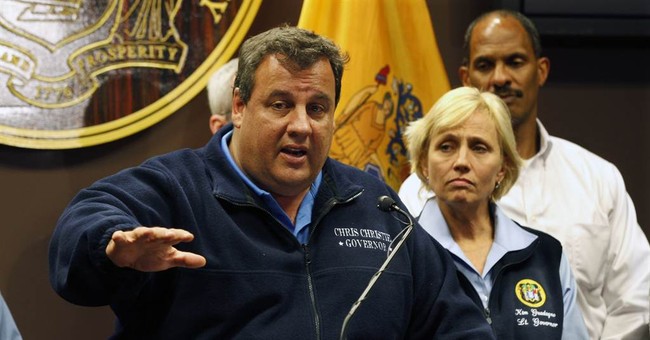 Democrats have been demanding that New Jersey Lieutenant Governor Kim Guadagno weigh in on Hoboken Mayor Dawn Zimmer's explosive allegations, and now she has. Another categorical denial:


New Jersey Lieutenant Governor Kim Guadagno spoke in Union Beach Monday morning and addressed claims by Hoboken Mayor Dawn Zimmer that Governor Chris Christie's administration tied recovery funds to her support for a prime real estate project. Guadagno...told reporters that Zimmer's claims are not only false, but also illogical and do not withstand scrutiny when all of the facts are examined. "Any suggestion, any suggestion that Sandy funds that were tied to the approval of any project in New Jersey is completely false," she said. "Standing in Union Beach, as we are today, with some of the mayors whose towns were devastated by Sandy, and also being a Sandy victim myself, makes the mayor's allegations particularly offensive to me." Guadagno said she thought she had a good relationship with Zimmer and is surprised that she would mischaracterize the conversation about development and job creation in Hoboken. "I have devoted an extraordinary amount of time to bringing projects, to creating jobs and retaining jobs in Hoboken," she said. "I proudly support and continue to support the creation of jobs in Hoboken and all of New Jersey, and I will continue to work on those projects."


Zimmer, whose only proof of her version of events are her memories and writings in her personal diary that she claims to have authored last may, met with federal investigators earlier today, at their request. Zimmer now says she didn't report the alleged corruption eight months ago because she was nervous that people wouldn't believe her. Four months after the Christie administration's alleged shakedown gambit, Zimmer -- the self-proclaimed victim -- lavished praise upon the governor, congratulating him on the "great job" he'd done on behalf of her city. That's curious behavior from an extortion victim, especially one who'd supposedly written an emotional journal entry detailing her despair over Christie's corruption just a few months prior. Another emerging wrinkle are new statements from another Democratic mayors. Matt Doherty of Belmar has come out and tossed cold water on another aspect of Zimmer's story:

Zimmer, a Democrat, stuck by her story Sunday. She said her conversation with Constable occurred May 16 at Monmouth University prior to their appearance as panelists on a TV event produced by NJTV. [The network] doesn’t have any pre-broadcast audio records from that event, said Debra Falk, a spokeswoman. Belmar Mayor Matt Doherty (D), who also was a panelist, said he didn’t hear a conversation between Zimmer and Constable. “I sat next to Mayor Zimmer and, if I recall correctly, (Constable) was on my other side,” Doherty said. Doherty, also a Democrat, said Belmar hasn’t faced delays in receiving recovery money. “The administration has always been cooperative and professional and encouraged us to contact them right away if there’s anything we need,” Doherty said.


Other media outlets are also picking up on the fact that Zimmer floated a separate theory about the withheld Sandy relief funds several days ago. Back then, she blamed it on her decision not to endorse Christie's re-election campaign. Now she says it was about back-scratching over an urban development deal. Team Christie is pushing back hard against the very notion that Hoboken didn't receive sufficient relief funds. The original MSNBC story leaves the distinct impression that the city received less than $350,000 in aid out of a $127 million request. In fact, Christie's office points out, Hoboken has benefited from nearly $70 million in federal and state recovery and relief funding -- which they say is commensurate with aid received by similarly situated municipalities. They emphasize that not a single grant application from Hoboken was denied. MSNBC's report, Christie aides say, conflated total aid with the much narrower issue of "hazard mitigation" funds. They concede that Zimmer did, in fact, request more than $100 million in hazard mitigation assistance -- which at the time accounted for more than one-third of the entire available budget allocated for that purpose. The Press of Atlantic City reports:


Mary Goepfert, a spokeswoman for the state Office of Emergency Management, which oversees hazard mitigation programs, said her office has seen more requests from municipalities planning such projects, but funding is limited by the federal government. “That’s a reality of hazard mitigation,” she said. “The state has a limited amount of money to work with.” Information provided Saturday from the state Office of Emergency Management shows more than $6 billion was requested from Ocean, Atlantic and Cape May counties for about $300 million available in Hazard Mitigation Grant Program money to address the needs of all 21 counties. Goepfert wrote in an email that requests from all 21 counties exceeded $14 billion.


In an email to reporters, Christie spokesman Colin Reed notes that based on this data, "only two percent of all hazard mitigation project requests across New Jersey could be funded." Joe Scarborough and company discussed Zimmer's claims this morning and expressed considerable skepticism:

As I wrote over the weekend, I'm not discounting the possibility that Zimmer is telling the truth, and that Team Christie played disgusting, cynical politics with Sandy relief funds. But she's going to need a lot more than some unverifiable diary scrawlings to back up her claims, especially in the face of strong denials from the accused parties and the contradictory evidence laid out above. If she can't provide additional verification for her account, her allegations will look more and more like a political hit job timed to keep the scandal music playing against a prominent Republican. Former New York City Mayor Rudy Giuliani slammed the Democrat in charge of the New Jersey legislature's 'Bridgegate' investigation on Meet The Press over the weekend, citing quotes that Giuliani says make clear that the chairman has already made up his mind. Giuliani called on the Assemblyman to step down or recuse himself:

Wisniewski is the state's former Democratic Party chairman, and has lambasted Christie as a "right-wing zealot" in the past. I'll leave you with my conversation with Fox News' Gretchen Carlson about this entire episode:

UPDATE - If Democrats' goal is to scuff Christie up with swirling accusations, they may be succeeding: