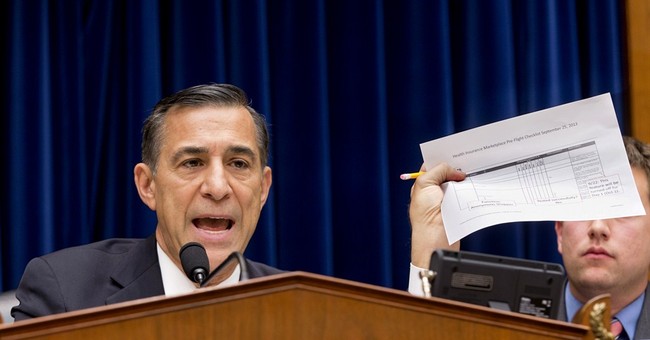 A new report produced by Rep. Darrell Issa's House Committee on Oversight and Government Reform reveals that Obamacare's controversial "Navigator and Assister" program has suffered from chronic poor management, resulting in widespread disarray, since the law's October 1 launch date. An advanced copy of the document obtained by Townhall raises a number of competency and security concerns. Below is a brief summary of its revelations and conclusions:


(1) "The preliminary staff report the Committee released on September 18, 2013 outlined concerns that lax Navigator and Assister training requirements and vague marketing standards increased the likelihood of identity theft for consumers," the report reads. "Despite several letters, hearings, staff briefings, and transcribed interviews with U.S. Department of Health and Human Services officials responsible for the program, HHS failed to heed the Committee’s warnings. And, as predicted, after open enrollment began, news reports revealed poorly-trained Navigators gave consumers incorrect information about the health care exchanges, violated HHS rules and procedures, and even encouraged applicants to commit tax fraud in some instances." (2) "Major problems" have plagued the navigator program's performance, the committee's verdict concludes. These issues caused confusion on basic enrollment procedures and led to faulty advice and guidance being relayed to consumers. Some assisters allegedly urged customers to violate the law, while others broke the rules themselves. HHS officials responsible for the Obamacare navigator operation reportedly discovered several of these breaches through external media reports, rather than "internal oversight procedures," which the report suggests is indicative of a "lax" culture of self-policing.

(3) Obamacare's navigators and assisters were utterly unprepared for Healthcare.gov's technical difficulties, and were provided with no contingency plans by their superiors. "Unable to use the website because of widespread glitches, Navigators lacked direction from HHS on how to sign up consumers," according to the report, which states that it took administration officials three weeks to begin implementing a back-up plan: "Because of its failure to anticipate and prepare adequately for website problems, it took HHS three full weeks to comprehend the vast scale of the technical problems and direct Navigators away from the website and toward paper applications. The push towards the use of paper applications further increases security risks, since health insurance exchange applications contain personally identifiable information."


The Wall Street Journal reported in August that efforts to hire and prepare navigators were "barely off the ground," forcing the Obama administration to scale back training requirements related to the program. Various state-level officials also raised concerns about whether citizens' private data would be safe in the hands of under-vetted government employees hired to walk consumers through the application process. HHS Secretary Kathleen Sebelius confirmed in Congressional testimony last month that the president's signature law does not preclude convicted felons from being hired with taxpayer money to handle the public's sensitive personal information. An undercover investigation by the conservative group Project Veritas exposed unethical and illegal behavior by a series of government employees operating under Obamacare's navigator umbrella. According to the organization's reporting, five navigators have been dismissed as a result of its investigation. The Obama administration on Friday declined to comply with a House Oversight Committee subpoena regarding the state of Healthcare.gov's IT security measures. In a letter to the committee, HHS officials stated that providing such information to Congressional overseers could itself constitute a security risk, flatly indicating that the administration doesn't trust Rep. Issa to handle such sensitive information -- which is his committee's task. The full staff report will be released to the public later today. Chairman Issa will also convene a Monday field hearing into the navigator program near Dallas, Texas at 1:30 pm local time.